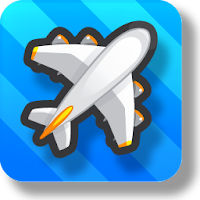 Firemint is pretty much the only large game developer left in Australia. Tragic on one hand, but good for Firemint on the other. Now all the wannabe Miyamotos of the future will drop in for a spot of interning.

And this is how we ended up with Flight Control on WiiWare. An intern joined the company, right about when the head honchos were thinking about how to milk this (admittedly brilliant) game just that little bit further.

“We haven’t done a WiiWare version yet!” One exclaims.

“By sweet Kangaroo, you’re right, we haven’t!” The other replies.

But Firemint is busy. Busy preparing for a new game release, Agent Squeak, which does look like a whole lot of fun. The obvious solution was to get the intern to do it.

“Wow, really? I love Flight Control,” said intern said. “I have some great ideas about how it could work on the Wii. We can really take advantage of that Wiimote to change up how the game is played.”

“Steady, son,” replied the project lead before heading back to his work hammock. “You’re porting the DSiWare game. Here’s the assets, just copy paste Wiimote control in place of the touch screen.”

“But, that’s not going to work very well. The Wiimote traces across the screen quite slowly. It will be hard to be precise with directing the planes around.”

“Are you questioning me, son?” 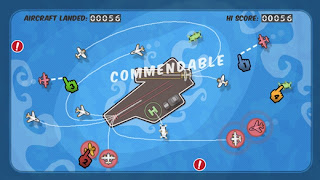 “Motion control worked with the PlayStation Move. Oh, and add in multiplayer. Wii owners love that.”

“The Move is a 1:1 device, the Wiimote isn’t, and Flight Control isn’t a multiplayer game! Have people’s cursors flying all over the place and it’s going to get really confusing!”

“They’ll like the game because it’s a WiiWare game. They don’t get many of those any more.”

Dejected, the intern starts tapping away at the keyboard. A day later he’s almost finished the ‘new’ game. He shows it to his project manager, who is happy with the work.

“I just need to implement the online leaderboard, and it’s good to go,” he said.

“Steady son, no need for an online leaderboard. Local would be much cheaper.”

“Is there ANYTHING I CAN do?”

“Sure. With that leaderboard, let people write their signatures using the Wiimote. That would be really cool.”

The intern left the next day. 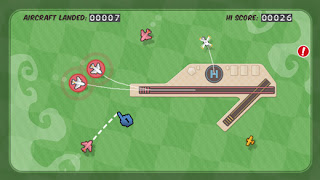 Please note: This is only a fictional story. I have no idea how Flight Control WiiWare happened, and I probably don’t want to know. It’s an intensely cynical ploy to milk more money out of the IP. It saddens me, because I do truly love Flight Control, but this is an exact port of the DSiWare game, with inferior motion controls tacked on. Further, the graphics are fuzzy and clearly not optimised for a TV screen… and that’s playing on a small screen. You’re in for a experience that will make your eyes bleed if you try and play this on a big TV.

Even at 500 points, it’s more expensive than some other versions of the game. If you have a PS3, you’ve still got the best version of this game (3D plus smooth and accurate motion controls), but the iPad’s HD visuals, the iPhone’s cheap asking price and even the DSiWare’s portability all leave this game trailing far behind in terms of value.

Even after all this time to produce the game, there isn’t a single new level to be found. THAT would have made this a worthwhile purchase for the Flight Control tragics. I should know – I bought the iPad version of the game for that precise reason, but no such luck here. All you get here are the five standard (and dullest) levels of all.

The only people I can possibly recommend this game to are those who literally only have a Nintendo Wii, and even then, bear in mind that it’s the worst port of the lot before you start wondering where the appeal is in Flight Control.

Thoughts: Was buying Eidos the best thing Square Enix has ever done?