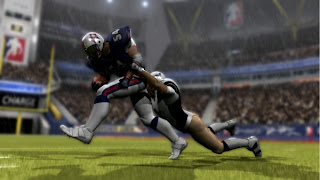 As much as I love gaming on the iPhone and iPad, there are cases where those games that work fairly well on those devices to fill in short breaks at work or on public transport do not work on the home console. There, most people are looking for a meatier experience.
We’re not talking about the iPad’s deep, complex experiences like Avadon, or the multiplayer genius of games like Ticket to Ride; we’d love to see both games pop up on PSN at some point. No, we’re talking about the likes of Flight Control (truly woeful on WiiWare), and Backbreaker. It’s pretty sure, but it’s also so thin on content that the $Au23 asking price is just frightening.
There’s three main ways to play Backbreaker. There’s a mode where you run a human gauntlet to score a touchdown, there’s a mode where you try and tackle someone running across the field (and it’s not even a streaker, sadly), and there’s a mode where you do both. It’s a purely arcade, score attack kind of game. Think “American Football training simulator” more than the actual sport.
There’s points for ducking out of tackles at the very last moment. The field is littered with zones that net bonus points and then, in true American football style, there’s points for showboating. Lots of points for showboating. It slows the footy player down to a crawl, and makes him easy to tackle, so the timing of the showboating is key for maximising points in this game.
As befits a game with an iOS background, controls are simple. There’s running, sprinting, showboating, as well as a couple of basic maneuvers. Backbreaker controls well. Very well, in fact. The avatars are highly responsive, and animation is smooth and slick. It’s also a very good looking game, with hugely detailed characters and a pretty green field. Of course, it would want to be, there’s only ever a handful of characters on screen at once, so it would have been unforgivable if they didn’t look good. 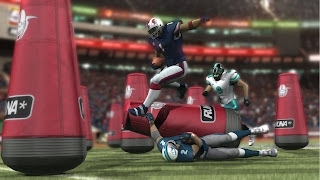 But that’s all there is to this game. A couple of arcade games. There’s plenty of different scenarios and challenges within those games at 20 a piece – and a reasonable difficulty curve, but they’re still just minigames. There’s multiplayer – on and offline, but they’re just minigames. It’s difficult to find the inspiration to get all the way to the 20th challenge here.
There’s no real players, no real acknowledgement of American football history. There’s no commentary, which some would say is a good thing, but repetitive or not, commentary has become so ingrained in sports games that the lack of it makes for an eerily empty atmosphere.
It’s not that Backbreaker lacks for production values, or style. If this exact game was on iPad for $2, it would be an easy recommend. On the PS3 however, and at $23, it would be far better picking up a real sports game. There is a demo available – we strongly recommend trying before buying this one.