Web-based MMOs must be pretty popular, because there’s a lot of them. You know what else is popular? Zombies. So mixing the two is a sure fire success, or so Ballardia hopes. 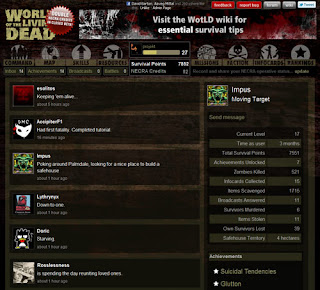 World of the Living Dead places players as operatives of the National Emergency Control and Relief Agency (NECRA). They’ll need to guide a small group of survivors through zombie-filled streets.

Ballardia promises 12 thousand square kms of gameplay environment, and players will be able to log on through PC, Mac, Linux, iPhone, iPod Touch, iPad and other smart phones.

It’s a game where your character’s death is permanent, apparently, and survivors have requirements for food and liquid, and are affected by fear and fatigue. We’re not convinced there’s much more to this than the innumerable other browser-based MMOs, but if the setting appeals to you, you can find the official Website