Fans of Starcraft haven’t been able to play the RTS series on the iPhone or iPad previously. They still can’t, but Gameloft is on the case with a “homage” due on Thursday – Star Front: Collision. 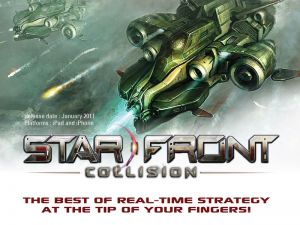 The chances of there being anything original in this game are next to nothing, but Gameloft fans will know what to expect – a competent, but shameless copy of Blizzard’s amazingly popular strategy game.

For those interested, the plot (according to the press release):

Welcome to planet Sinistral, where the rare Xenodium crystals are coveted by a human mining conglomerate: The Consortium. But, they are not the only ones to lust after the rare mineral. The Myriad, an indigenous race of aliens, is addicted to the Xenodium and will do everything they can to prevent the Consortium from plundering their resources. To add to the chaos, a savant robot race called the Wardens wishes will try to turn the war in their favour.

Whose side will you rally?

NGP vs. 3DS: How do they stack up with online services?