A first person shooter. On a touch screen-controlled device. Who would’ve thought that to be a good idea? Well, apparently Gameloft did, and the surprising thing is that it actually works. 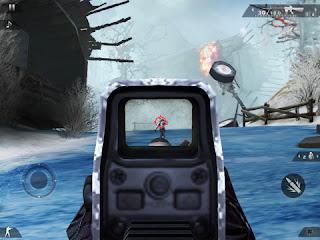 Using iron sights increases your shot accuracy.
Gameloft’s no stranger to iOS shooters. The company’s first entries in the genre date back to early 2009, and its dev team has had ample to time to fine-tune its trademark control scheme and run n’ gun gameplay. Thankfully, Modern Combat 2 is everything one could want in a sequel.
MC2 controls just about the same as Gameloft’s previous shooters, but it feels tighter thanks to a good dose of tweaking. The game utilizes a virtual analogue stick to move, and there’s an assortment of virtual buttons to shoot, throw grenades, and crouch. You can look around by dragging your thumb anywhere else; you can also drag your thumb while shooting to look, which is absolutely necessary if you plan on not dying. The default settings position the icons in a very pretty, albeit extremely uncomfortable arrangement. Thankfully, you can reposition all of the icons in the in-game options menu, and I strongly recommend that you do so.
One issue I did have is that the grenade and crouching icons are much too small on the iPad’s large screen, and it took me a good bit of tweaking their positions before I got them centered in on my sweet spot. It’s not game-breaking by any means, but it did provide some annoyance, especially online. 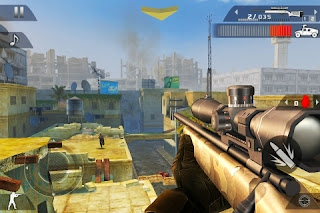 Sniper rifles are essential in some levels.

If you’ve had enough experience with a real gamepad and buttons, you should warm up to the virtual controls over time. It took me a good many hours of playing N.O.V.A. before I felt at one with the controls, but honestly it all boils down to memorizing the button placements, just like a normal game controller. Yes, you can argue that you don’t get the physical feedback, but that was never really an issue with me. It’s simply training your muscle memory.

On the gameplay side of things, Gameloft really stepped up their AI system with Modern Combat 2’s campaign, and while enemies still fling themselves out into the open and like to stand still while you spray bullets at them, it’s definitely a step up from the original N.O.V.A.: Some of them like to take cover behind walls and even attack you while you’re hiding behind cover, waiting for your health to slowly regenerate. The greatly improved animations also lend a hand in making the enemies seem more lifelike.
The level design is pretty solid. There was a particularly fun level where you had to make your way through a World War II-esque battlefield, dodging exploding shells and machine gun fire. It was intense stuff, and left me thoroughly impressed. The gameplay does get a bit same-y after awhile, but if you get burnt out on it you’ll find yourself plugging away at the campaign in a matter of days, if not hours.
The campaign is strewn with about half a dozen quick time events, and it’s obvious that Gameloft had a lot of fun with them – especially the final scene of the campaign. They’re animated well, but some of them are admittedly more annoying than fun and will send you cursing your way back to your last checkpoint. Fortunately the ending sequence more than makes up for it. 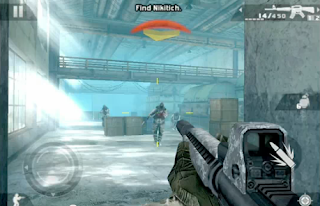 I can has headshot?
The campaign’s all well and good, “But what about online?” you ask. Well, to me, this is where the game really shines. The game employs a Call of Duty-like ranking system, where killing enemies and chaining kills grant you experience points, which increases your rank and in turn unlocks new perks and weaponry. It’s a fun and addicting system, but since I haven’t played the recent CoD games, seasoned veterans are less likely to be as enthralled by it as I was. To its credit, the perks and additional weaponry don’t give you too much of an advantage. It didn’t take me long to climb the ranks and acquire some of the more efficient weaponry, despite my going up against some pretty highly ranked players fairly often. In MC2, skill beats perks. But perks help.
As far as content goes, there’s six different multiplayer maps and just over a dozen weapons. Disappointingly, this includes several different versions of the MN106 Assault Rifle. While this is a cool weapon (and far and away the best of the lot), I would’ve liked some more variety in my loadout.
The 10-player multiplayer modes consist of Deathmatch, Team Deathmatch, Capture the Flag, and Defuse the Bomb. I had fun playing all of them, but my favorite was easily Capture the Flag on the Avalanche map. During my play sessions I felt most like I was playing on a team and working together – making a suicide run into the enemy base to cover my flag-thieving teammate was exhilarating, to say the least.
Visually, MC2 is one of Gameloft’s best looking titles. The framerate’s pretty consistent, and the environments are both varied and well-made. As I mentioned before, the animation is much improved over past iterations, and while it’s not on the level of console offerings, it’s still pretty darn impressive for a tablet device. Facial close-ups bring to mind visuals of a zombie apocalypse, but given their infrequency it’s easy enough to forgive.
For $US6.99, this game is an absolute steal. I’ve logged a good 20 hours online, and have started playing through the campaign a second time. Of the currently available Gameloft shooters, I consider this to be far and away the best of the bunch, surpassing even Gameloft’s latest, N.O.V.A. 2. If you’re looking for a fun, intense and engaging shooter, then this is an experience not to be missed.

Runes of Magic revenue to provide Queensland with flood relief