An early contender for 2023 GOTY

Mystery. Romance. Monsters. These are common elements of JRPGs. And they are all part of Path of the Midnight Sun, a new indie entry to the genre that has just released. I was lucky enough to have the opportunity to preview the game last month. Even in my brief (two chapters) experience with the game, I knew it was going to be something special. There’s something about it that draws you in and keeps you wondering, regardless of how much you’ve already played.

There is a high story to go through with this one, so I’m going to try to sum it up as quickly as possible without spoiling anything. All of the necessary history is told in the prologue, opening up the rest of the game to the present rather than the past. There is no stopping to explain backstory, it all fits into the narrative in a streamlined way.

The Demon King first appeared 60 years ago. The kingdom stood up to him with the help of eight Legendary Heroes. But he was immortal, meaning he could only be repelled and never defeated. The good news, however, is that it’s possible to contain his power within a human body. That body is the Vassal. Lady Faratras is the current Vassal, and it’s up to her (with as much outside help as possible) to keep the Demon King under control. So when she’s attacked by her own people at her own castle, she doesn’t want to risk fighting back in case it is perceived as the Demon King breaking free and controlling Lady Faratras instead of the other way around. A stranger steps in to protect her. She notices he has red eyes… but only descendants of the royal family (such as herself) have those eyes…! So now she needs all the help she can get to convince the world she hasn’t been corrupted before everyone, everywhere turns on her and tries to replace her as the Vassal.


There is something occurring in the world called Mana Scourge. Animals have been corrupted by the power of the Demon King, despite him being contained for 21 years at this point. His power disrupted the balance of Mana in the world, turning some innocent creatures into fearsome beasts. Suzaku and Shiori (I’ll talk a bit more about them soon) have been sent to quietly investigate Lady Faratras, as some people have become suspicious of her. Considering what she went through at the castle, it seems as though someone has turned against her… are they trying to allow the Demon King to escape and regain power? It’s very possible but my lips are sealed from this point of the story onwards.

There are a few different protagonists. The prologue starts with Suzaku, though, which makes me feel the most connected to him. Suzaku’s full name is Sir Suzaku Ornières, adding a lovely French twist to him. His travelling companion is a blind priestess named Shiori, and she calls him Nini for short. This demonstrates the close personal relationship between the two; they’re not just work partners, they are lifelong friends. Suzaku, the Captain of the Holy Swords of Pylum, has amnesia, so Shiori needs to teach him how to fight. It’s a clever way to insert the tutorial into the main story. At one point, Suzaku meets a dog. And yes, you can pet the dog. Though… it’s not really a dog. It’s a rare dwarf wolf that can sniff out wealth. That’s helpful! It can help players find treasure in the backgrounds.

There’s a lot to love about the characters, whether main or background. Those who appear harsh can be big softies, just with walls up. Suzaku’s amnesia makes me want to care for him. Lady Faratras’ convictions make me want to protect her. Hellios is socially anxious, and I really relate to him in that sense. I truly care about their fates. The character art is some of my favourite in the game (though the backgrounds can be quite stunning). It’s also detailed and creative: enemy dragons wear iron knee pads, for example. 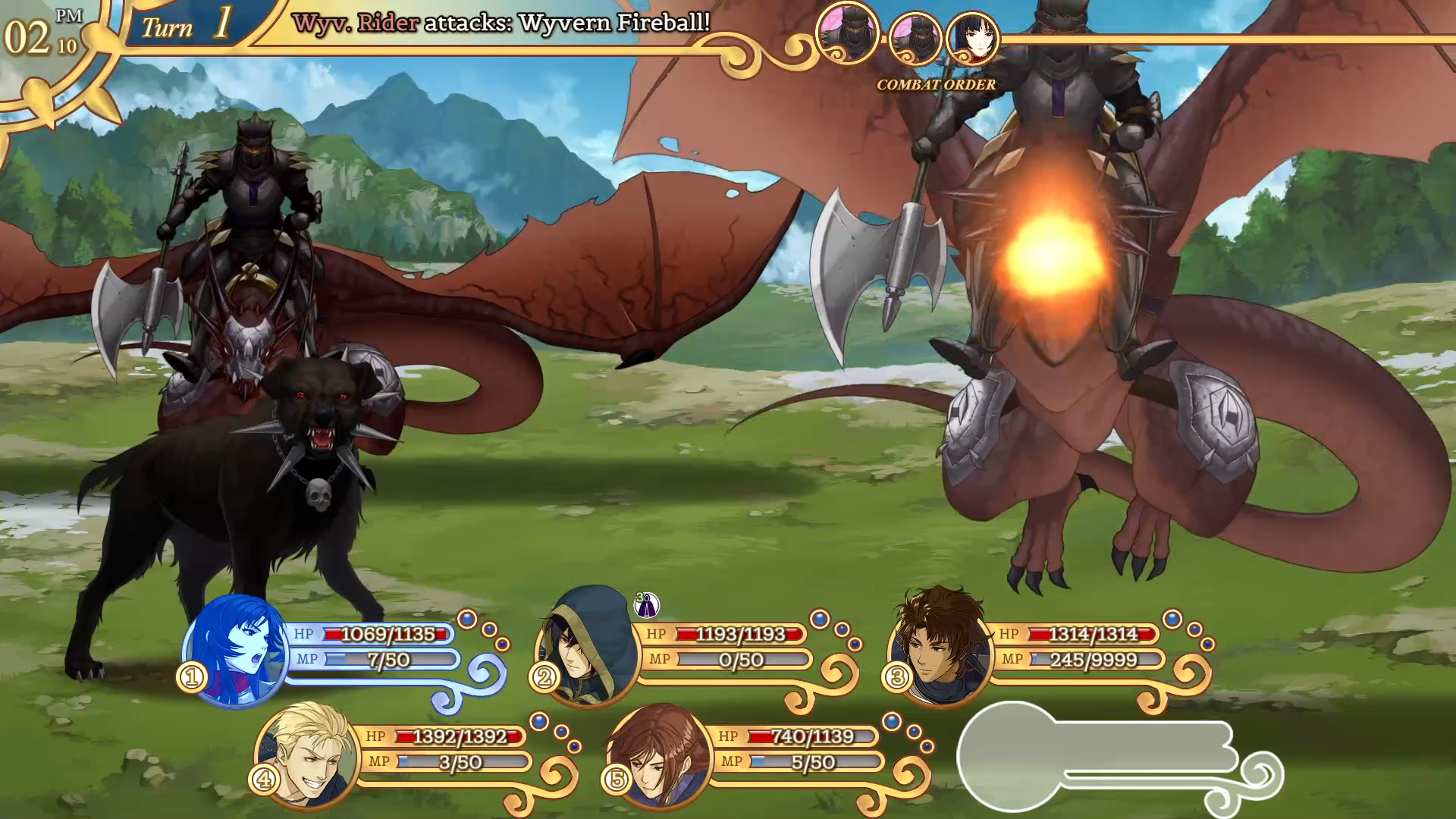 The game mechanics are familiar, yet present a new twist on turn-based play. Everything happens in “phases,” and every movement on the map has an amount of time attached to it (it passes with each movement, not with real-time). When that limit is reached, enemy forces make their move. Every action uses up time. In my preview of the game, I refer to time as a type of currency, and now that I’ve played more I firmly believe that statement to be accurate.

The game includes three different gameplay “sections,” as I call them. There’s exploration, there are maps, and there are battles. During exploration sections of the game, gameplay is similar to visual novels. Go place to place, poking around, talking to people, and continuing with the story. Maps generally contain battles and sometimes secret findable items. On maps, enemy groups can merge, creating extra waves in one battle. I really like the way that the type of terrain impacts the battles that take place on it. There are bonuses or penalties that apply to either the attackers or the defenders, so sometimes it is best to approach the enemy and sometimes it’s best to let them come to you. Battles are turn-based. Players can see what order their characters will fight in, as well as where the enemy will strike.

What’s a JRPG without side quests?! The people are Arvium often need help. For example, one quest is to find a woman’s missing boyfriend. Quests are only available in the chapter they first appear in; after that, they’re gone for good. Another common element in JRPGs is mana, basically a quantitative form of magic. In Path to the Midnight Sun, Mana (capital M here!) is produced when a human is super-stressed, so it accumulates over time in battle. It can then be used for powerful attacks or healing. Players can also use stockpiled Mana in the skill trees to upgrade or learn new character skills. Each party member has their own tree. 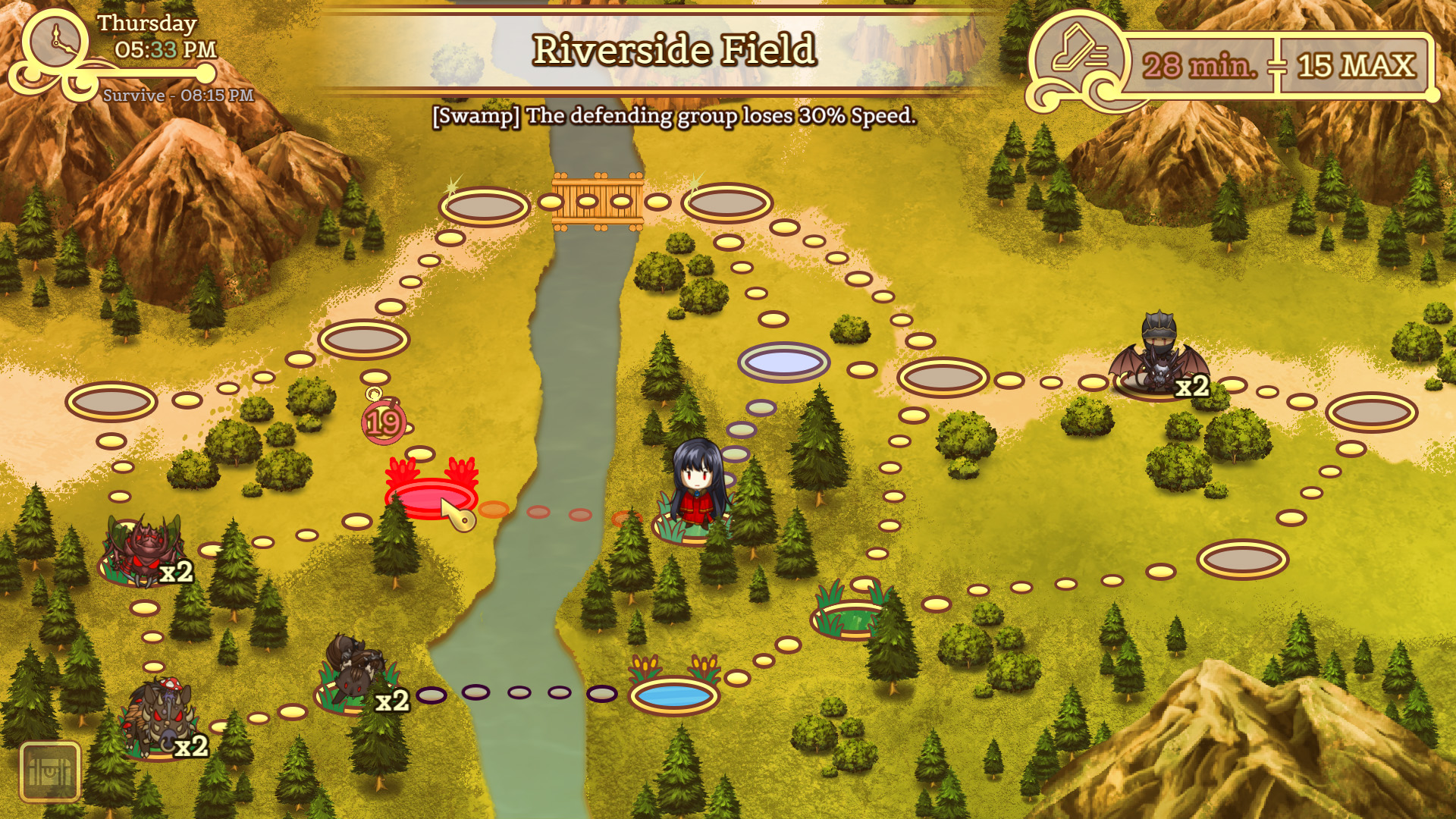 When out of battle, it’s important to keep your party members happy. Talk to them to increase affection and/or sanity, feed them to keep them sane. Mana generation is directly tied to how well the team is doing, so keep an eye on their stats! There are party members, and then there are adjutants. Players control party members, whereas adjutants step into battle from time to time of their own volition.

There are four difficulty modes, making the game quite accessible from that standpoint. My preference is story mode, which focuses more on the story and makes it relatively easy to get through the battle elements without removing them altogether. Up next is easy mode, for those who want a relaxing experience that is rarely challenging (the boss battles get a bit tough but that’s completely expected). Then there’s normal mode, which gets challenging enough to require players to think outside the box. Finally, for those hardcore players, there’s… well, hardcore mode. It inserts the toughest hurdles possible into the gameplay.

Let’s be real: JRPGs and JRPG-inspired games are a dime a dozen. It takes something really special to shine. Path of the Midnight Sun does just that. I never thought I’d be sitting here in the first half of the first month of 2023, saying that a game is a GOTY contender. But that’s exactly what I’m doing. It’s in the running because of its intriguing and often surprisingly original story, relatable characters, and solid gameplay. It’s a love letter to classic JRPGs, but also a game that understands the need to stand out on its own.