I have been looking forward to the sequel to Crime Opera ever since I played it on the Nintendo Switch back in 2021. It was a very indie visual novel, but it had an intriguing, interesting and different narrative, had moments where it hit really hard, and set itself up nicely to spin out into a series. The second title in the series is now live, and it does look good! The developer does recommend that you play through the first in full before getting stuck into this one, so make sure you do that, and then settle in for some hardcore gangster storytelling.

This is an even bigger game than its predecessor, at more than 107,000 words (the original was around 70,000, from memory), and that’s pushing up into the big leagues as far as independent VNs go. As with the previous game, you can choose to play with no choices, or direct the narrative according to key decisions. Additionally, I really can’t state this strongly enough – prepare for some brutal moments. Crime Opera goes dark places (as it should, of course), and is quite unflinching about what it depicts. I believe the developer has plans for even more, so now is a good time to get into the series, before you have too much catching up to do!

One of the games that I love that I probably don’t talk about all that much is Puzzle Quest. I really enjoy the combination of puzzle-matching and RPG, and do wish that there were more of these kinds of games (that weren’t free to play and therefore compromised by premium items and microtransactions and the like). Invasion of the Geminorons is a new game in this kind of genre, with a twist… it was made for the Game Boy Color! 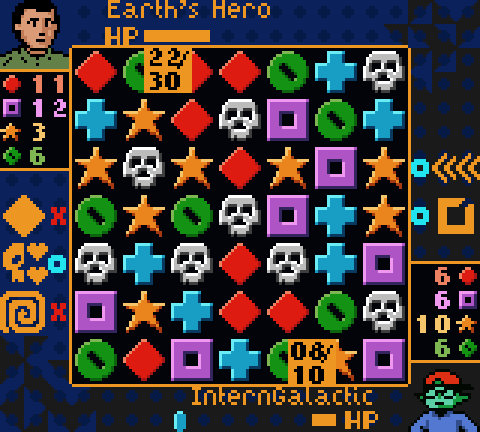 You can play it for free online, or you can pay a couple of dollars to download the ROM and load it up on your emulator (or emulation console) of course. As a game it’s pretty straightforward and no-frills – match items to build up power and attack the enemies that you come across on your quest. What’s impressive is how much depth the developer seems to have crammed into a humble Game Boy format… if this thing had been on a cartridge back in the day I would have lost many (many) sleepless nights to it, I can assure you of that. It’s the perfect type of game for a handheld gaming console.

I do like a “walking simulator” if it tells an interesting story. To this day Everybody’s Gone To The Rapture is one of my favourite storytelling experiences, for example. November could be something in that vein. Featuring “photorealistic” graphics and a story of “tragedy” and “horror”, this is one of those “no threat” games that could still leave you feeling chilled.

It’s nice and short at 40 minutes, and only features 12 voice-over notes to track down and 40 “paintings” to find (I’m not sure why, as the game’s description is anything but useful). It’s only $3 to support, and I do think that short, experimental games should be supported. The production values in general are quite impressive, too, with decent visuals, backed up by surprisingly good music and voice acting for something so small scale.

Finally this week, we have the latest visual novel of one of itch.io’s prolific favourites, ChaniMK (there’ one away from 20 games on itch!). Rapscallions On Deck seems like a lot of fun. You play as Larsa, who is kidnapped by a crew of four pirates (who think that she’s a boy), and set to work on the boat. Soon enough, of course, she comes to realise that despite them being pirates, they’re not such bad people, and then the love story begins.

It’s a full scale indie VN, with 55,000 words, 26 CGs, those four romanceable boys, and nine (nine!) possible endings. The game has a good range of diverse characters, some lovely art, a fun soundtrack that captures the pirate theme nicely, and is just generally a really pleasant VN if you like otome and fun love story things.

Modern classic Japanese board game, Machi Koro, is finally getting a digital edition