Sometimes nostalgia is best left as a warm memory...

Bless their hearts, the team at the developer, Siactro, try hard. The people at this developer obviously love early-era 3D platformers. Previous efforts include Toree 3D and Toree 2, and while they’re not great, the love that goes into them is real and obvious. They’re the kind of projects that are painful to criticise because there is something so genuine about them. You don’t want to tell the developers that you didn’t care for them. Unfortunately, I’m going to have to be critical of Super Kiwi 64 too. It’s better than the Toree games, and the progress towards producing something decent is real. It’s just that this one is not a patch on the games that inspired it.

Super Kiwi 64 aims to be in the vein of Banjo-Kazooie and Donkey Kong 64. The game is split into a number of discrete levels, all with a specific theme, and within those levels, you need to run around collecting stuff to earn gems… which is another resource you need to accumulate. Yep, it’s a collect-a-thon in the truest sense!

These gems can be earned by collecting gear pickups (around 50 per level), tracking down and jumping through a number of hoops in each level (around five per level), smashing targets, or simply figuring out how to reach one that’s out of reach. Some of the environments also have a limited ability to adjust the layout of the level to aid in your search for stuff. For example, standing on a switch in one level causes lava to rise, giving you new platforms to reach previously inaccessible areas. The overall intent of the game is to make each objective and “gem” a kind of mini-puzzle that you need to figure out through a combination of exploration and experimentation. 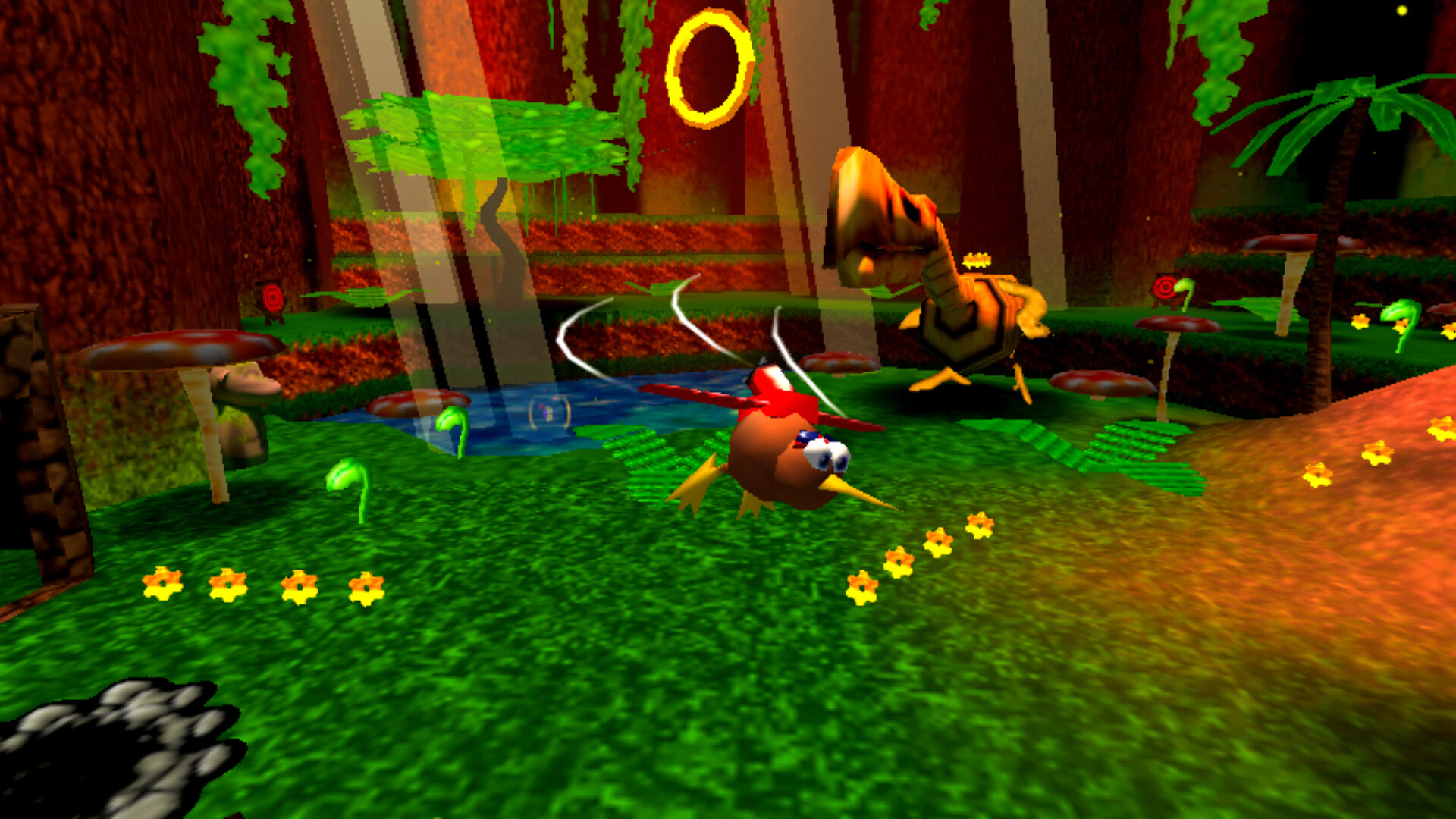 This formula was incredibly popular back in the N64/PlayStation 1 era of platforming for a simple reason: it allowed developers to cram a lot of stuff to do into a relatively small number of levels, and work within the limitations of the hardware at the time. Super Kiwi does get the look right, with some gorgeous low-polygon, 90s-era level design. It’s garish, but appropriately so, so a big kudos needs to go to the art team for their commitment and ability there.

Unfortunately, there’s so little that backs up the aesthetics. For one thing, there’s absolutely no personality for the kiwi that’s meant to be at the centre of the adventure. There’s nothing that introduces the character, no effort to give it a personality in the levels, and when you think of what people loved about these old “collect-a-thon” puzzles, the characters of Banjo & Kazooie, Donkey Kong, Kao the Kangaroo, Ty the Tasmanian Tiger and all the rest were a big part of it. I don’t even know the name of the character here. I’d actually completed two levels before I realised that in the hub world there was a friendly character I could “talk” to that told me I was collecting these gemstones so that we could escape “here.” No, I don’t really know where “here” is either. For a genre that lived and died on its ability to have players chuckle as they platformed, Super Kiwi 64 comes across as particularly humourless and consequently it wasn’t a joy to play through the levels.

To the developer’s credit, it is possible to do the levels in any order. Platformers of that era typically locked off levels until you had earned enough “gems” (or equivalent) in previous levels to progress. I distinctly remember getting so stuck in Banjo-Kazooie because I just could not get anything out of the obligatory water level that for the longest time I gave up on the genre altogether. I much prefer this approach, which allows people to go through the levels they are most comfortable with first. It’s even possible to complete the game without collecting everything, if you ever find yourself really stuck. 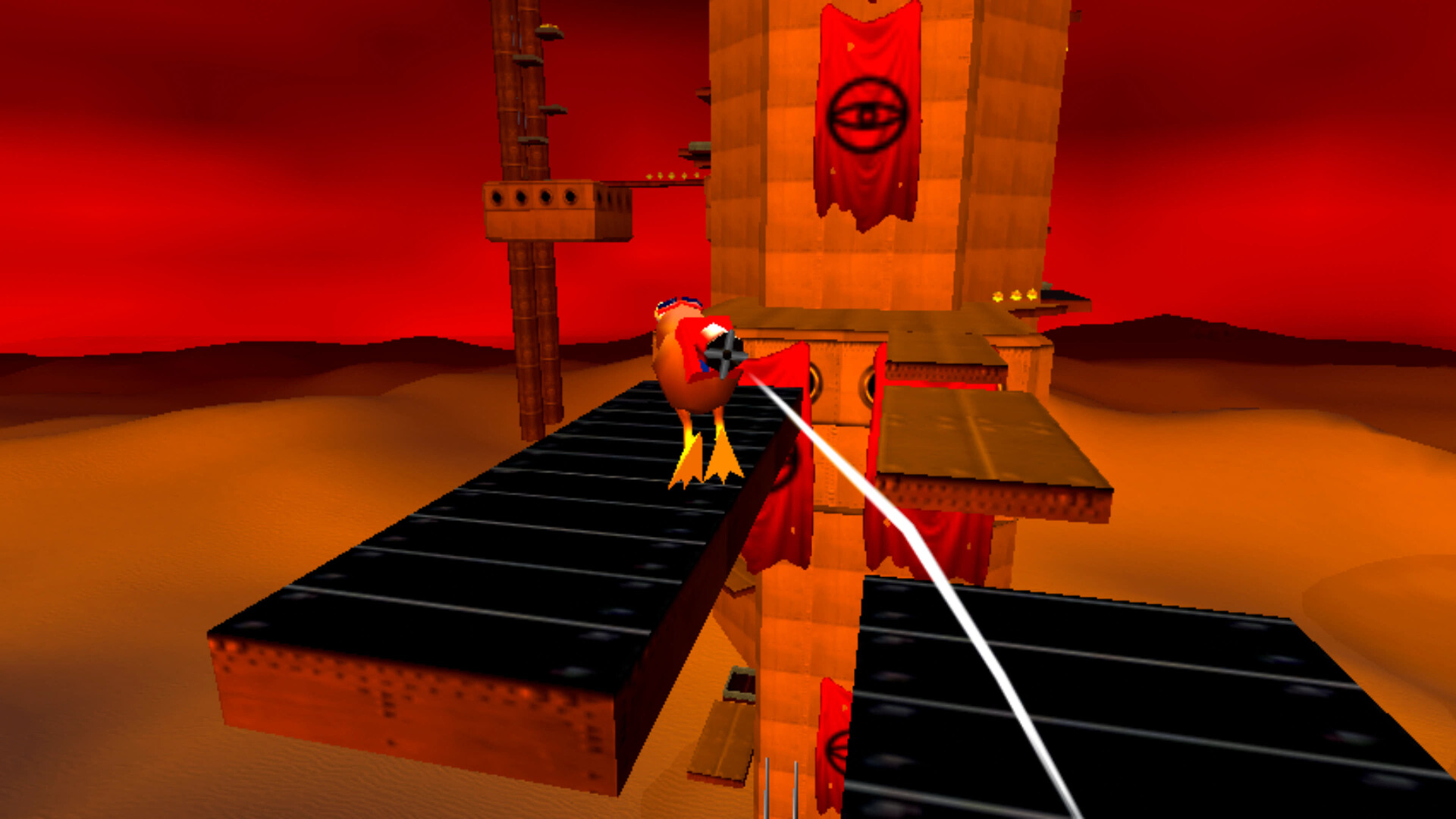 However, Super Kiwi 64 veers far too much in the other direction and it’s far too easy to race through the game, unlocking everything while barely breaking pace to look around. Part of the problem is that the levels are tiny, and therefore it’s really easy to see just about everything you need to complete them from almost the moment you enter them for the first time. There’s also a general static quality to the environments and a dearth of enemy threats which makes exploring them far less dynamic or exciting than they really needed to be. That lack of enemies or moving threats only makes things even easier. The level design is also very rote, and while the developers were probably aiming to tap into nostalgia that way, the end result is a generic-looking and playing thing with little to surprise or delight.

Finally, and I can work out if this was deliberate or not, because the camera of platformers in this era was notoriously terrible, but Super Kiwi 64’s camera is painful to manipulate. Trying to pan or shift constantly results in the camera “falling” through the ground or getting stuck on things that make it hard to see where you’re trying to look at. Camera pans and tilts are also, by default, too slow, but jumping into the settings and ramping up the sensitivity results in the camera becoming too twitchy. I never found a setting that worked quite right for me. Again, this may well have been a deliberate throwback to the kind of camera mechanics we all suffered through back then, but whether deliberate or inadvertent, it’s not good at all.

Of course, the game’s very cheap, and in fairness (again!) to the developer, Super Kiwi 64 distinguishes itself from Toree and its sequel by being a properly complete game, with a complete structure and some kind of extended length to it. You’re still only going to get a few hours out of the eight levels, but it does play like something that has been built as a complete experience, and not just a couple of levels thrown together as Toree was. 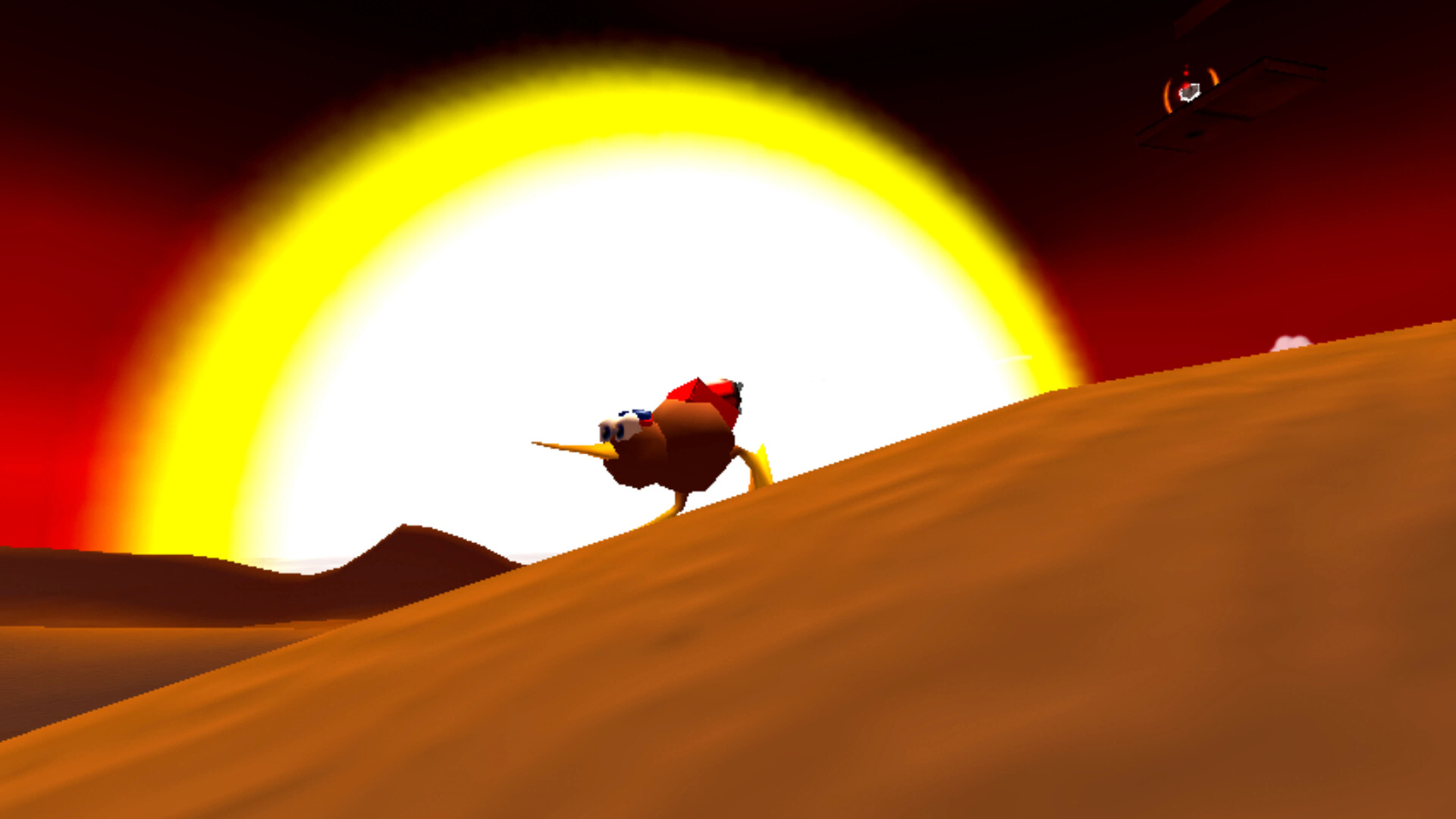 But it’s just not a great game and it doesn’t bring anything new or interesting to the genre. A character that we could get behind, some interesting level quirks, or some humour would have been enough. Instead, all Super Kiwi 64 trades on is the fact that it’s a nostalgic platformer for people that have fond memories of Banjo-Kazooie and are really that desperate for something new in that very specific genre to play. And people that don’t mind a vastly inferior experience just for that moment of nostalgic rush.