This is how open world adventures should work.

Dragon Quest Treasures is a very chill, very laid-back game. It doesn’t ask too much of the player, but gives them a wonderful, vibrant world to explore, filled with sparkly treasure to loot. It would never work as a numbered Dragon Quest – it’s too limited for that – but as a spinoff, it succeeds in identifying the most beloved qualities of the Dragon Quest experience and then letting them shine. In that sense, it’s a game for the truest fans, and almost feels like a grand “thank you” gesture for the many years of commitment your typical Dragon Quest fan has put into this series.

I am a true Dragon Quest fan. I’ve even had the opportunity to go to a VR arcade in Japan and play a Dragon Quest VR experience, where a group of us moved around a large warehouse space fighting monsters by swinging physical swords and wands. As you can probably imagine, it was a blast and probably the best VR experience I’ve ever had (and I’ve done the Mario Kart VR and Hatsune Miku things as well). Dragon Quest Treasures isn’t in VR, but it does share the same celebratory tone as that theme park ride. And, just like that ride, the main focus of the thing is to simply let you exist in a Dragon Quest world for a while.

The world of Treasures is immersive. The main loop involves scouring the world for hidden treasures. Allied monsters that you recruit on the way will give you “visions” (a picture of an area holding a hidden treasure), and it’s your job to search around the area to figure out the exact spot that the picture depicts. It’s a simple kind of puzzle that we’ve seen in plenty of other games before, but here it really works as it encourages you to really slow down, take your time, drink in the setting and explore every nook and cranny as you go. 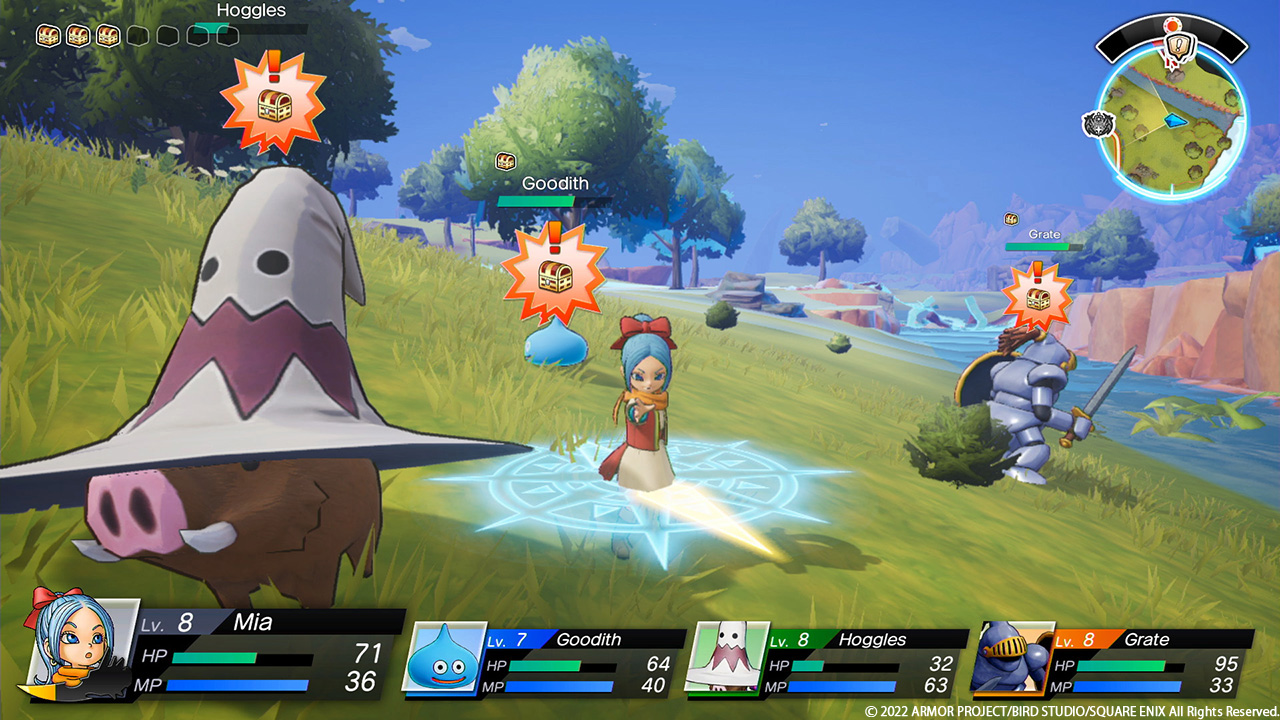 It’s such a well-made world to explore, too. it seems like every time you round a corner there’s something new and fantastic to see and do. Treasures’ appeal as a setting is helped by the bright anime aesthetics, that pop and give the world life, but this is also one of the best examples of open world design I’ve ever come across. So often with open worlds I end up complaining that while they’re big, they’re also exhausting to move across and are filled with stuff purely for the sake of content. In those cases, the narrative and experience itself inevitably be better off were the experience linear. Assassin’s Creed, I’m looking at you. But Dragon Quest Treasures is different. This is an open world where the space itself is part of the texture of the experience, and every square centimetre of it is built for some purpose. As such, it is so filled with delights and hidden bonuses that it’s a space you simply want to putter around in and explore.

The other side to Dragon Quest Treasures is the ability to recruit a wide range of monsters to join your party. They’ll help you fight in battles, they’ll give you the “visions” that you need to track down the treasures, and each has some kind of exploration ability that will help you get past obstacles and reach the most hidden parts of the world. Beyond that, the simple fact that they’re the adorable critters that we have come to love from many years of Dragon Quest makes them worth collecting in their own right.

This has always been a strength of the series, and having a Slime, Draky or otherwise following you around is every bit as iconic as it is to have a Psyduck or Pikachu in Pokémon. On that note, it’s amusing to have the first true open world effort of both respective mega-properties come out side-by-side after many years of tussling in other ways (remember Dragon Quest Monsters?). Whatever other comparisons you might want to make, Dragon Quest Treasures certainly has the lead on production values and technical build. This game has nowhere near the problems that Pokémon Scarlet and Violet do, and I would imagine that there are plenty of people out there that will appreciate that. 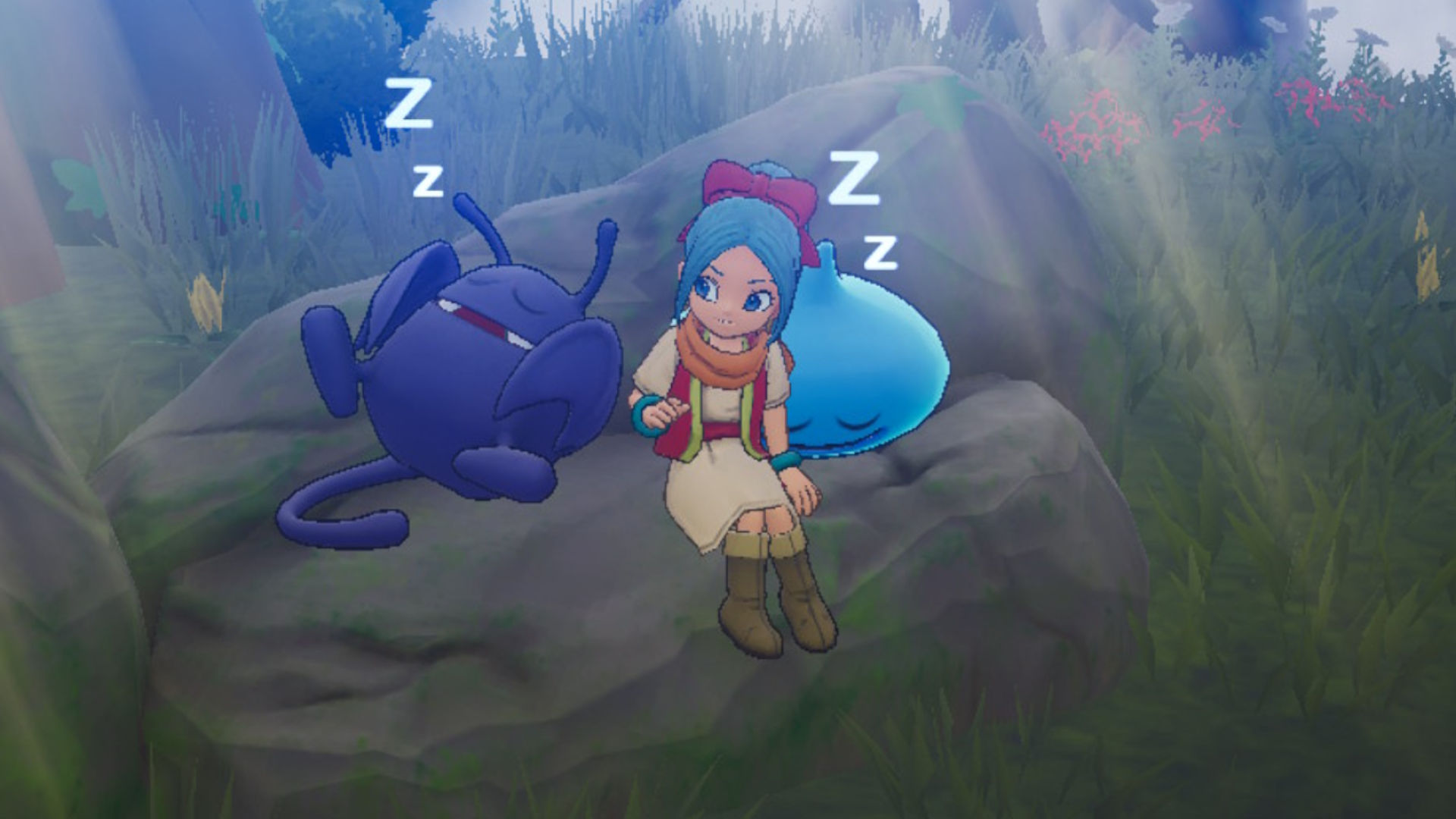 The only real problem with the game is the combat system. It’s largely forgivable because, unlike other Dragon Quest games, combat isn’t the central gameplay interaction in Treasures. You’re more focused on that exploration so you can get to the loot and use it to build up your home base. However, there are still a lot of enemies that get between you and those goals, and dealing with them is both limited and clunky. Attacks don’t flow nicely, and the dodge mechanic isn’t nearly as responsive as it needs to be. Soon enough you’ll be leaving as much work as possible to the monsters that you’ve recruited into your party (who are all AI-controlled), but that makes your direct role very passive indeed.

The developers do give you a sling weapon, which you can use to attack enemies with a variety of “infused” pebbles (effectively magical attacks), as well as provide buffs and healing to your allies. I think this was an attempt to make your role in combat more one of support and tactics but it’s not particularly deep or satisfying in application. Additionally, these battles – including the bosses – aren’t really challenging enough to hold most player’s attention. I understand why the developers felt an obligation to put the combat in there, but it’s very much the weakest quality and too frequently reminds you that this is “just” a spinoff.

In every other way, however, Treasures is the Dragon Quest experience that you expect. The overarching narrative is fanciful but simple – find special stones of monumental power from across a world made up of the remains of two massive dragons – but Dragon Quest does its best work when it keeps the big objectives simple and allows you to enjoy the moment-to-moment interactions. The beloved humour of the series is on full display, and it does not seem to matter how many Dragon Quest titles you play, you’ll never stop chuckling at everything from the character names to their little quirks and mannerisms. It’s a pity that Dragon Quest Treasures is going to be overlooked as a spinoff dumped into the market late in the year, because there’s still in here that the entire industry could learn from. The way that the developers have clearly built an open world around the concept and adventure, rather than the other way around, makes Treasures one of the most meaningfully enjoyable open world experiences this side of the Yakuza series. Yes, the combat is a misfire, but the opportunity to go chill out with and go on grand treasure-hunting expeditions with your favourite Akira Toriyama creations is always going to be irresistable, and this is one of the better opportunities to do just that.