The Bard would be proud.

For years now Zeboyd has been the indie JRPG developer for delivering true love letters to the genre in a way that fans of the genre love. Cthulhu Saves The World and Cosmic Star Heroine are both magnificent, highly entertaining “retro” JRPGs that respect the player’s time and provide a brief, positive, and wholesome diversion. The company’s latest effort – This Way Madness Lies – is also, by far, their best.

The game looks and feels like something from the SNES era, with pixelated art, a top-down map, and a turn-based combat system. The character sprites, however, are particularly gorgeous and detailed and capture the magical girl quality perfectly. 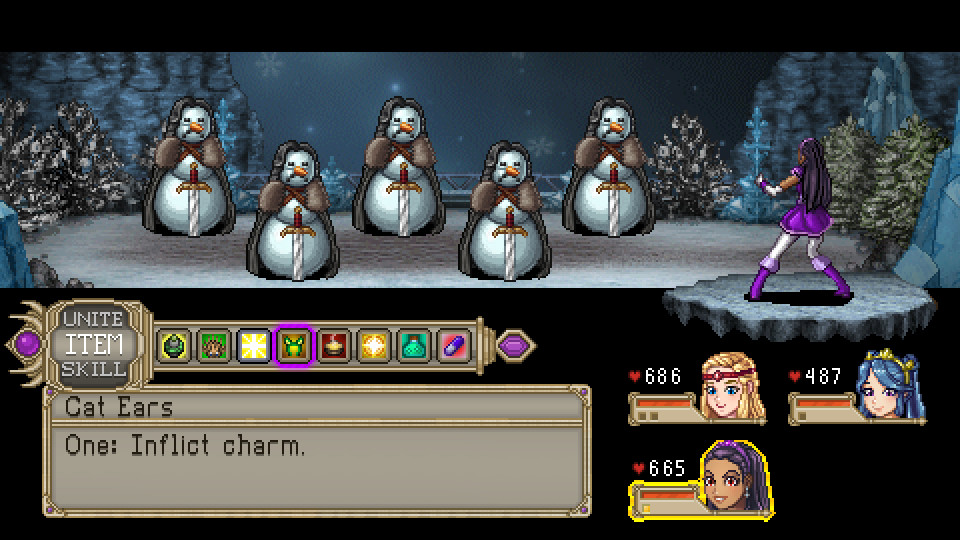 As characters level up they naturally acquire new abilities, but one of the key features of the game’s combat system taps into the camaraderie of your typical magical girl storyline. These girls might not be able to go out on dates with one another as they can in, say, Blue Reflection, but they can team up for big special attacks, with the appropriately flashy pixel special effects.

Meanwhile, the adventure through these Shakespeare-inspired levels is a hoot, and that comes from some of the best writing I’ve ever seen out of an indie developer. You’ve got two options for dialogue – there’s “Shakespearean” and there’s the “modern translation,” which you can switch between at will. The stories don’t exactly follow the path of the plays (there’s no killer demonic tree that kidnaps Romeo in the actual Romeo & Juliet, after all), and so the script blends actual Shakespeare lines with original words. However, whether original or new, those lines are tonally spot-on, and the “translation,” injects a lot of humour into the dynamic.

“Or, if thou wilt not, be but sworn my love, and I’ll no longer be a Capulet,” Juliet says. It’s the most famous line of Juliet’s from the play, and it’s a downright seductive moment where she promises Romeo she’s going to throw everything away to be with him. The “modern English” translation Zeboyd Games came up with, meanwhile, was “If you like the name Romeo so much, I can change my name to Trixy.” Excellent. 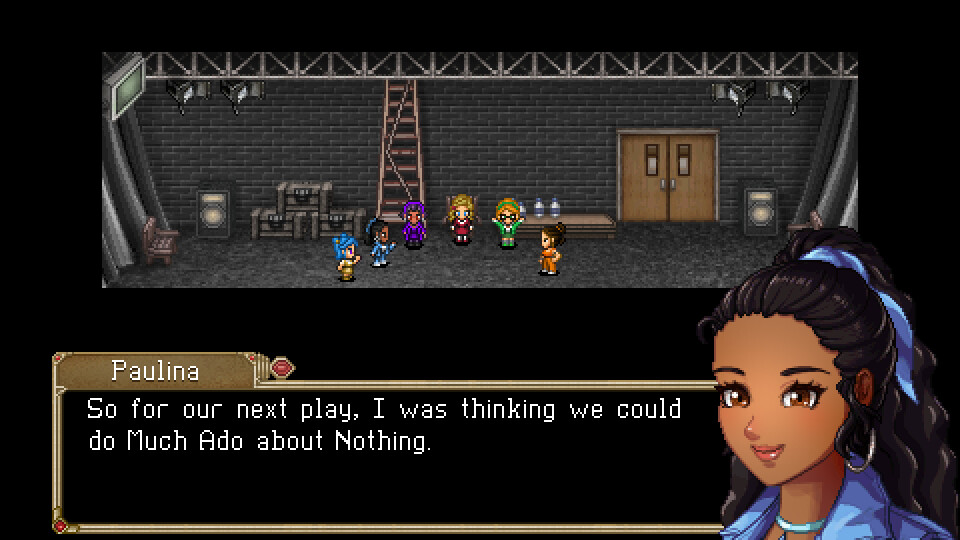 More than a few times in the past I’ve expressed disappointment at how rarely game developers draw on Shakespeare as source material for their work. I genuinely believe that an art form that refuses to engage with Shakespeare becomes questionable as an art form, and the only sincere effort I can think of prior to this was the (excellent) visual novel, Ryan North’s To Be Or Not To Be.

This Way Madness Lies is similar to Ryan North’s VN, in that the developers have taken the base material and used it as a framing for their own satirical deconstruction. It’s not quite as sharp as a deconstruction as the VN, which did admittedly approach Tom Stoppard’s Rosencrantz and Guildenstern are dead as downright literary, but This Way Madness Lies is still a very good example of how a modern artist can play with Shakespeare, using literature that’s so ingrained within our culture that key lines and plot points are known even to those who have never read or seen the play. To be clear, This Way Madness Lies isn’t disrespectful of Shakespeare. This is a grand homage to the Bard. It’s just playful with it and very funny as a result.

The game itself is built with as much love. Yes, it’s a homage to the 16-bit JRPGs of yesteryear, but no this is not an RPG Maker project. The sprites are detailed and the character art is of very high fidelity. Backgrounds, meanwhile, are bursting with vibrancy and careful design. Zeboyd’s team cleverly bring every visual motif back to the stage, giving the art a performative quality, and while dungeons are fairly basic to traverse (little more than finding the right trigger to “unlock” the next, previously blocked area, which some backtracking for treasure and loot), each new location was something to look forward to. Some will, no doubt, point to the brevity of the game as a negative. It is, of course, not a negative at all. This Way Madness Lies is exactly as long as it needs to be to end on a high and leave the player feeling satisfied. Any longer and the jokes would have started to wear down. It’s going to take you between five and ten hours to run through, depending on the difficulty you choose, and that’s enough. That’s the equivalent of two to four plays! I do wish more developers had that level of confidence, to let their game end where it needs to, knowing that some people out there will complain about length.

While it’s a stretch to call it a great and memorable game, because it doesn’t really do anything to stand out in terms of gameplay and design, the concept of This Way Madness Lies will stick with you. I would have perhaps liked a little more emphasis placed on the magical girl aesthetics, since, aside from the transformation sequences that doesn’t come across as well as it could have, visually, but that aside, this attempt at asking the question “what if Shakespeare invented magical girls?” is a resounding success. It is the perfect little game to play in between the endless stream of overweight content we now need to deal with.

Adventure Academia: The Fractured Continent looks for success in the West