Because we all need a giggle in our lives.

The “Loathing” property occupies a very distinct part of gaming and Internet culture. Kingdom of Loathing is 20 years old now (and still going strong!), and one of the pioneers in Web-based, massively online role-playing gaming. Thanks to hugely entertaining stickman character artwork and ridiculously entertaining nerd humour, it was up there with Order of the Stick and B-Bit Theatre as something that I – an RPG fan from childhood – found myself way too hooked into. There was a time when I was losing hours daily to that thing. I wonder if I could somehow recover my account to Kingdom of Loathing (if it even still exists)…

I stopped playing Loathing for quite some time (life happened), but four years ago, West of Loathing landed on various platforms, and it was a brilliant effort to take what people loved about Kingdom of Loathing, and work it into a single-player, offline format. Unlike the more “traditional” type of Dungeons & Dragons-like fantasy that Kingdom of Loathing lampooned, West of Loathing was, as the name suggests, a play on the spaghetti western, and it was excellent. Now we have Shadows Over Loathing. As its name suggests, this one’s a play on the cosmic horror of Lovecraft and, as you can possibly guess, it too is excellent. But are the jokes starting to wear a little thin (or am I perhaps just getting too old after 20 years of admiring this stuff)?

Shadows Over Loathing doesn’t do much to innovate on its predecessors. It is a simple, turn-based RPG that stands out because it offers some surprising levels of non-linearity at times. While not “open world” in the conventional sense, you are largely free to direct your characters around an ever-expanding map of key locations and explore those as you see fit, in whatever order you like, as you navigate a labyrinthine sidequest structure that gives you plenty of shiny things to distract you at every step of the way. While the substance of such quests is always pretty traditional RPG fare, the writing is so witty and silly that you’ll find yourself getting dragged in over and over again. 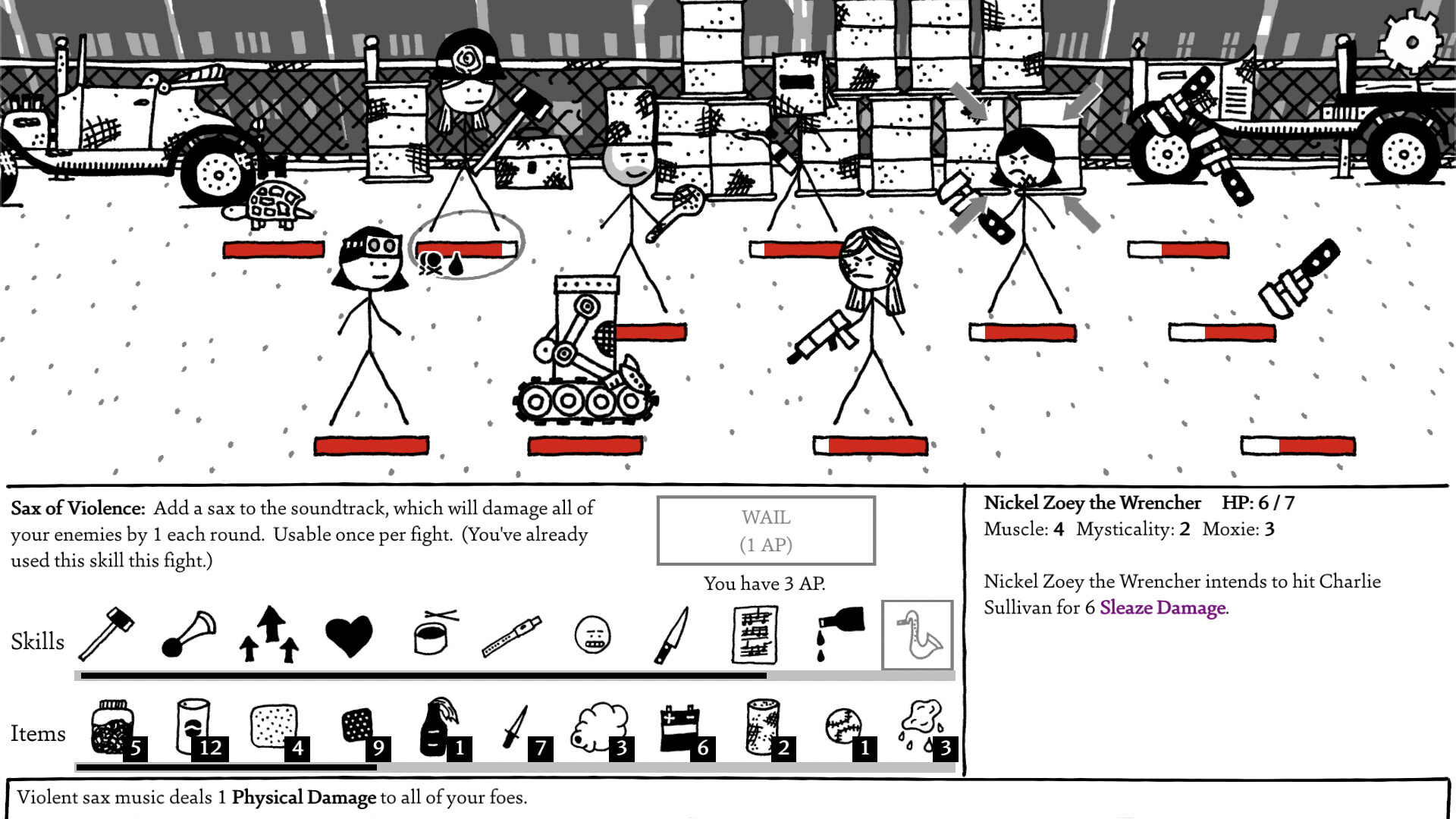 Shadows Over Loathing isn’t particularly deep with the way it lampoons genre tropes (whether that be the RPG genre or cosmic horror), but it’s delightfully droll and deadpan at its best. This is my own personal favourite form of humour, so I found myself chuckling along with just about every line of dialogue and every outlandish situation I found myself in. What undermines that humour a little bit is some of the design decisions around progression. For example, often you’ll find yourself unable to take some quests or resolve some issues because you haven’t “found” that part of a map yet. At other times you’ll find yourself stuck because you needed a critical piece of information to complete a quest, accidentally forgot to note it down somewhere, and are unable to pull that information up again. When these happen they can pull you out of the humour and leave you feeling frustrated, and that is never ideal in the context of a satirical game. These things happen very rarely, but I don’t remember ever feeling “stuck” in West of Loathing, but here there were times when I needed to simply drop quests.

As far as the RPG gameplay is concerned, Shadows Over Loathing is nice and streamlined. Your party heals fully between battles, and there are only three character statistics to keep track of – Muscle, Moxie and Musicality – with each character “job” type being predominantly reliant on one of those traits. This can affect how you approach the game, as some narrative branches rely on you having a specific statistic up to a certain level, but you can also use items to enhance those stats at times to give you an artificial boost.

Indeed, you’re encouraged to accumulate a massive inventory of stuff that can affect your stats in one way or another in Shadows Over Loathing. This is perhaps a holdover from the developer’s traditional MMO beat (and was also a feature of West of Loathing), and it operates on the belief that happiness is when numbers go up – the more stuff you’ve got in your game, the more you’ve been rewarded and the more progress you’ve achieved. It’s the endless dopamine hit. As a rewards system, it is fine, though your inventory does end up so bloated in Shadows Over Loathing that it is hard to manage. 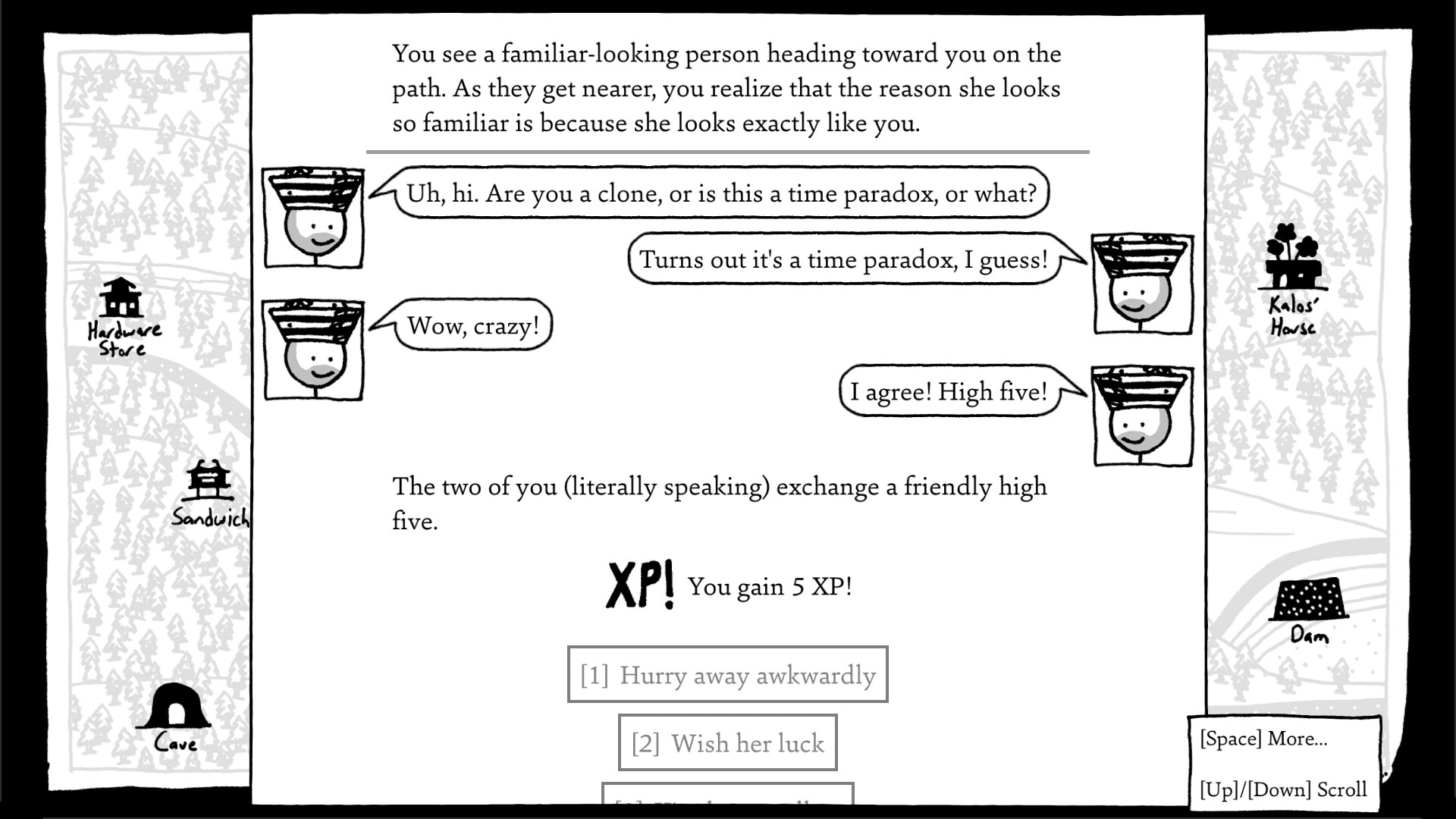 What gets Shadows Over Loathing by is the obvious fun that the writers had in building it. Much like how FromSoftware turned every item into an opportunity for lore and narrative in its souls projects (bet you never thought I’d get a Dark Souls reference into this review), the team at Asymmetric took every opportunity to make everything in their game a pun. It’s a dangerous thing to do, given that humour is perhaps the most subjective of all things and if jokes land flat a game can sour fast, but then again, the Loathing train has been chugging on happily for 20 years now, and so the developers probably figure they’re got a captive audience (with good reason).

The team is pacing Loathing releases out nicely, too. Four years between Loathing games is a good rate, to ensure that the jokes don’t become stale to the player. See, more than anything else, playing Shadows Over Loathing has reminded me, yet again, just how much I enjoy the zany antics of these silly stick figures, and apparently this humour remains relevant no matter how old and jaded you become. The video game industry is better for having developers like Asymmetric in it.

I’ve been in love with the concept of Bear &…