Grab some pizzas and head back to the 90s for a Turtley good time.

A wide variety of companies have held the licence to produce TMNT games over the years, but Konami can lay claim to having been the first. If you were playing a console TMNT game in the late 1980s or early 1990s, it was made by Konami, or one of its subsidiaries (when it was trying to get past Nintendo’s output limits for the NES).

Related reading: Konami actually did a really good job with the Castlevania collection, too. Check out our review.

With so many retro collection packages out there, I was very keen to see what Konami would do with the Cowabunga Collection, if only because other Japanese development houses have tended to be… shall we say.. stingy with their output. Yeah, I’m looking at you, Namco. Don’t think I’ve forgotten you either Sega.

On the surface, it appears that Konami’s being super generous, because Teenage Mutant Ninja Turtles: The Cowabunga Collection includes 13 turtles games from the late 80s through the mid-90s. 13 is famously an unlucky number, and you’d be unlucky if you figured that was 13 different titles, however. What Konami has done here is interesting, because it’s not just a vertical slice over the years around what it did with Turtles games. 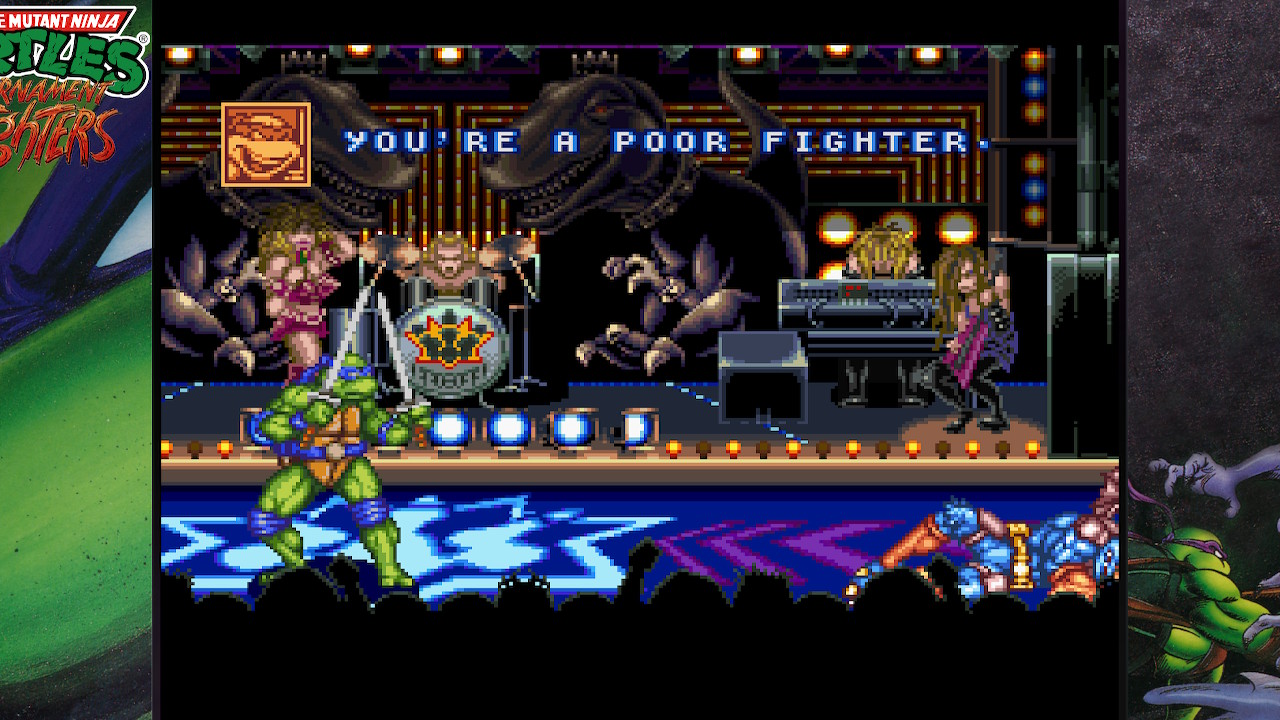 It’s also a horizontal slice, presenting the different format versions of a number of titles along the way. So, when you take that into account, it’s really only 9 games, not 13, specifically:

That’s still a whole lot of turtle power on display, and to Konami’s credit it’s 100 per cent of its output of Turtles games during that era. There were a handful of computer titles and dodgy handheld LCD games that aren’t here, but they weren’t Konami games. Konami did produce a number of Turtles titles from 2003-2005, and it’s a pity that they’re not also present here. The Switch version reviewed might have had an interesting time emulating GameCube titles (though Nintendo themselves have managed that), but there’s no reason why PC, Xbox Series X/S or PlayStation 5 owners shouldn’t be able to run those very smoothly indeed.

Nonetheless, it’s fair to say that Konami did put everything within its range in this collection. 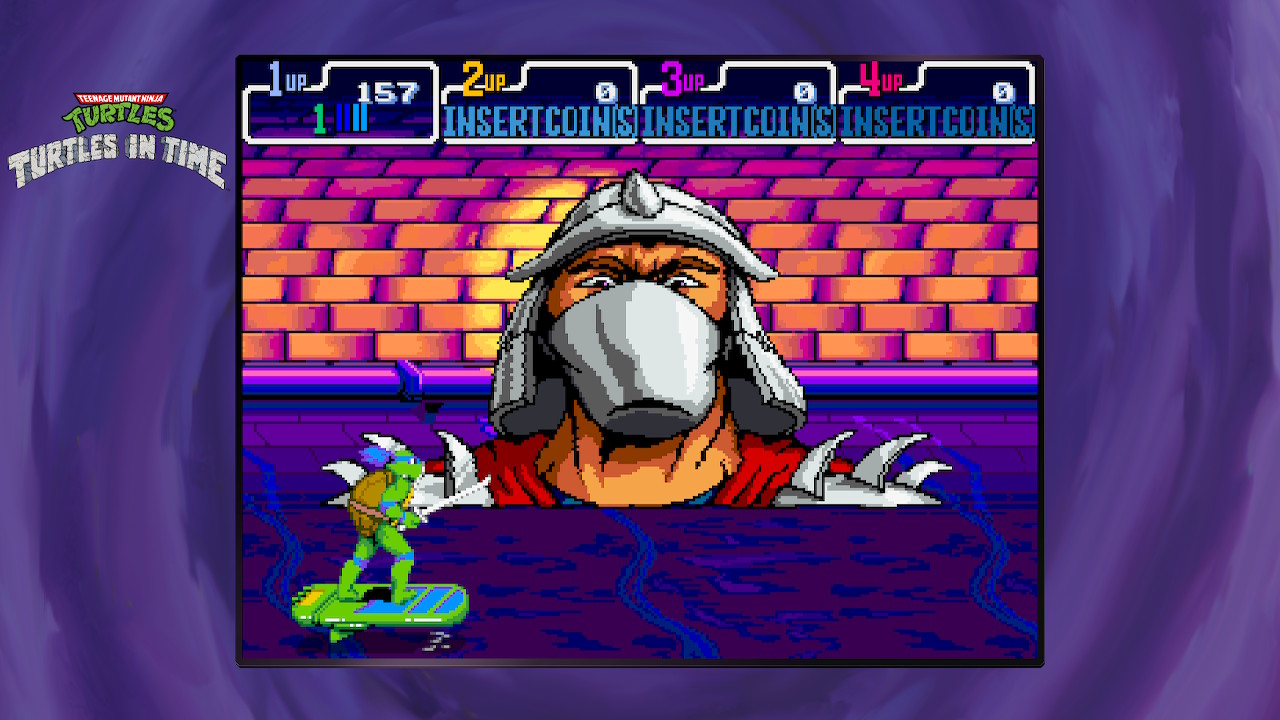 Game collections like this always trade heavily on nostalgia, and your reaction to playing any of these titles, perhaps the first time in many years will undeniably be flavoured by your memories of each game. That’s not the same thing as saying that they’ve stood the test of time, however, and there’s definitely a wide range of quality within the games on offer.

The good news here is that the original Turtles arcade game is still great fun, even if the NES version is understandably limited compared to the full-fat arcade experience. Likewise, it’s fascinating to see the differences between Turtles in Time for the arcade and its arguably superior SNES port. It’s also great to see that Konami’s included both US and Japanese versions of each of the games, because there are some small gameplay differences besides text across differing titles. Pedantically for a full museum-style collection, I would have liked to see the UK PAL versions included as well, if only because censorship issues at the time meant that they were the Teenage Mutant Hero Turtles. Can’t have the kids falling in with that Ninja crowd, now can we?

The Megadrive/Genesis Hyperstone Heist/Return Of The Shredder is an underappreciated little gem of a game, and rather hard to track down these days, so it’s very welcome here. Likewise, the NES-exclusive Manhattan Project shows how you could build on the arcade game model within the NES’ particular limitations.

However, for all of that, the game that a lot of retro gamers will have the widest array of memories around will be that original NES Ninja Turtles platform title.

It’s famously hard, and that’s still true here. The inclusion of a single save state and a short-term rewind function does shave some of the frustration off. However, it also reveals just how badly it’s aged, because honestly, it wasn’t a particularly good game in its own right even back then. Without the lure of the Turtles, who could basically have sold TMNT dog excrement baggies to excited pre-teens back in the late 80s, it wouldn’t even be notable today.

Then there’s the Gameboy titles, which are notable for three reasons. The first two are not particularly great games, but they’re amongst the first GB titles to use really large animated sprites. They look great, even if they’re not all that long or difficult… or engaging. Secondly, TMNT II: Back from the Sewers features a sliding kick move that looks exactly like your chosen turtle is scooting along the floor. It’s hilariously weird, and once you’ve seen it, you cannot unsee it. 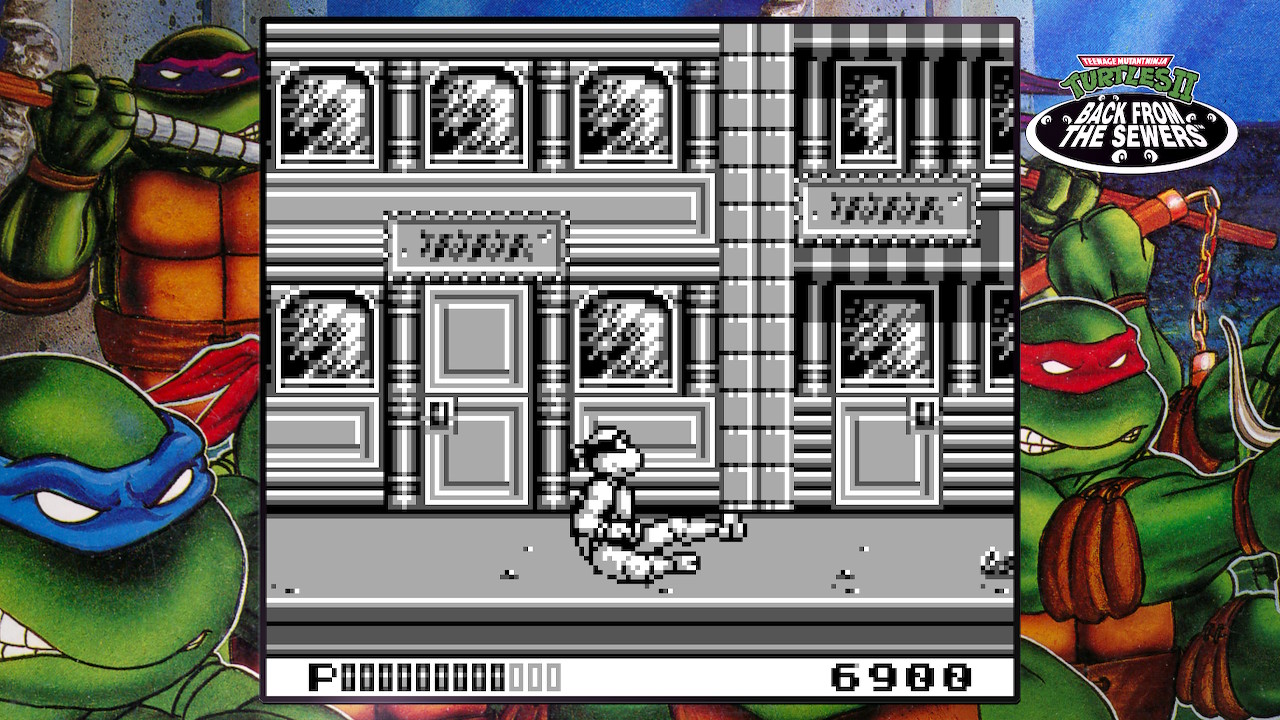 Then there’s the third game, TMNT III: Radical Rescue, which is an important title in gaming history. Why? Because it was basically made by the team that later went on to make Castlevania: Symphony of the Night, and it shows. It’s a proto-Metroidvania, years before the concept was properly codified. Sure, there are some rough edges, because it’s easier to get lost in similar-looking rooms, and some challenges are quite difficult. It would have been amazing to see Konami turn this into a full SNES/Megadrive game at the time, but sadly that was not to be.

There’s also Tournament Fighters, Konami’s attempt to ride the Street Fighter II one-on-one fighter wave of the early 1990s. The SNES game is the best of them, and that’s not saying much. I guess the animation is quite good, but they’re just not particularly good or compelling titles, although again it is interesting to see where they differ, especially between Sega and Nintendo’s consoles.

One notable annoyance with the way the Cowabunga Collection presents them is that there’s no mention of platforms when you’re choosing in the main menu. It’s easy enough to work out the GameBoy games or the NES titles, but the Tournament Fighters games aren’t even grouped together, which doesn’t help. 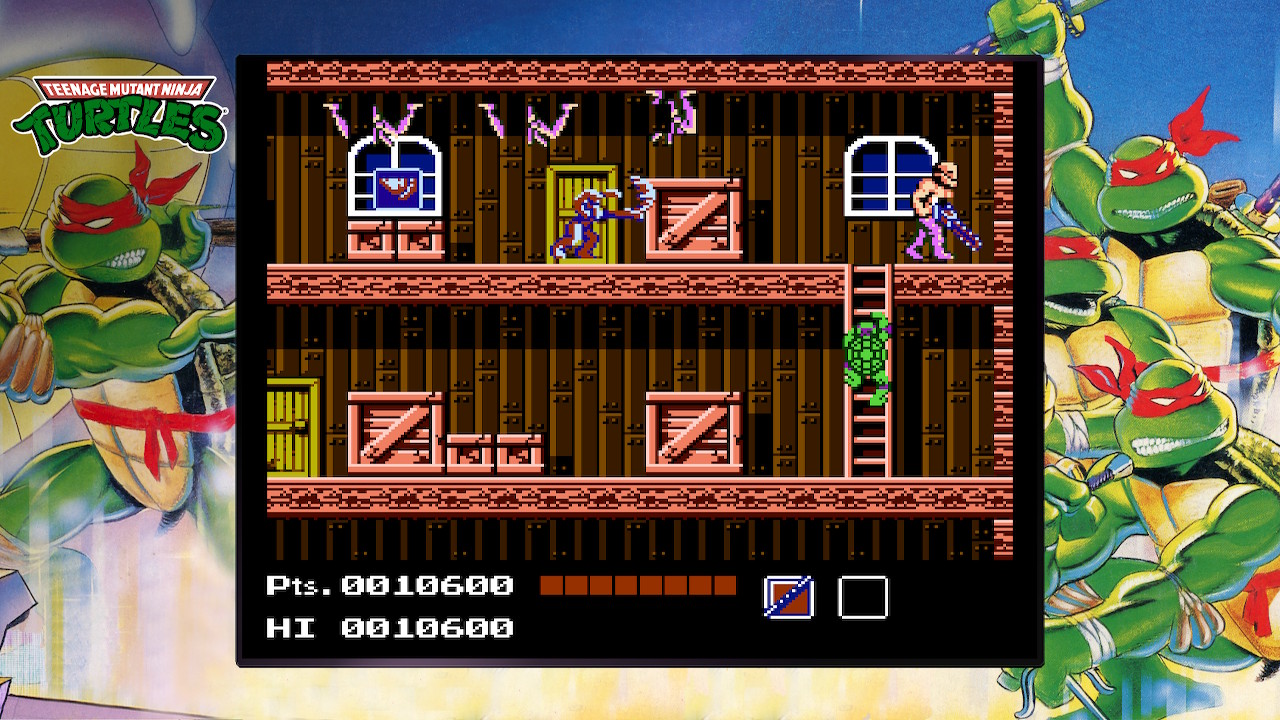 The Cowabunga Collection supports local or online play, but online is only available for the original arcade game, arcade version of Turtles in Time, the SNES version of Tournament Fighters and the Hyperstone Heist.

No, I’ve no idea why a single Megadrive game gets online support. Regardless, because I was playing them ahead of embargo, I couldn’t actually get any online games going. They work off a very simple lobby basis, and if I was a gambling man I’d suggest your best odds are going to be finding folks willing to play the original arcade game more than anything else.

I did appreciate that Konami’s gone to a little more effort with the presentation of the Cowabunga collection package, too. Each game has “enhancements” to make gameplay easier or set starting levels or similar. One realisation I had while playing the Turtles arcade game was that every single machine I played back in the day was being run by money-grubbing swines, because they were way harder than the default difficulty found in the Cowabunga Collection. 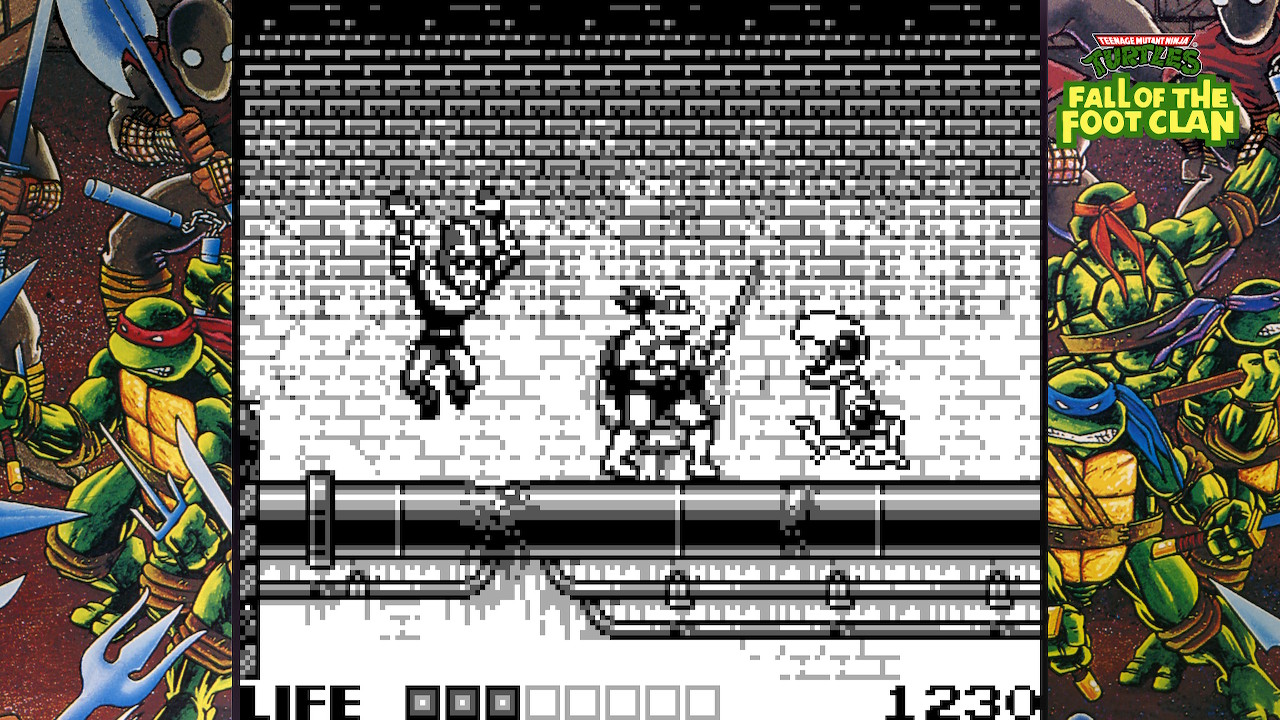 There are even custom-written “strategy guides” for each game, which is cute, as well as a separate box art, manual and promotional material. It’s a nice touch, but I would have liked to also see some of the TV spots used to promote each game, because some of those are quite wild. At a guess, the licensing team at Konami was already paying Nickelodeon for the Turtles licence and didn’t also want to reach into their pockets for Nintendo and Sega brand rights.

There’s also a variety of screen filters if you like that sort of thing. You can also pick between original resolution, an effectively doubled resolution with borders, or a stretched 16:9 resolution if you’re a total philistine with a fetish for fat turtles.

Teenage Mutant Ninja Turtles: The Cowabunga Collection does right by the retro collection format, although at around $60-$70, even for digital, it’s on the pricier side, which won’t sit well with too many gamers, I suspect. That’s a pity, because it’s the kind of historical approach to curation that I wish more companies would take seriously.