The great one deserved better.

Is there a video game character that has been more exploited than Pac-Man?

I’d argue – and I’m right – that Toru Iwatani’s famous pizza slice (or corruption of the Japanese kanji for mouth, depending on which interview he’s giving) – is the video game character that’s been most exploited over time.  Frankly, it isn’t even close.

Pac-Man is also in the movie Pixels, but the less said about that the better.

If you want Pac-Man in a movie, watch 1983’s Joysticks, an 80s teen sex “comedy” that’s remarkable today less for the boobs and much more for the many classic arcade games that are featured in it. But I digress. 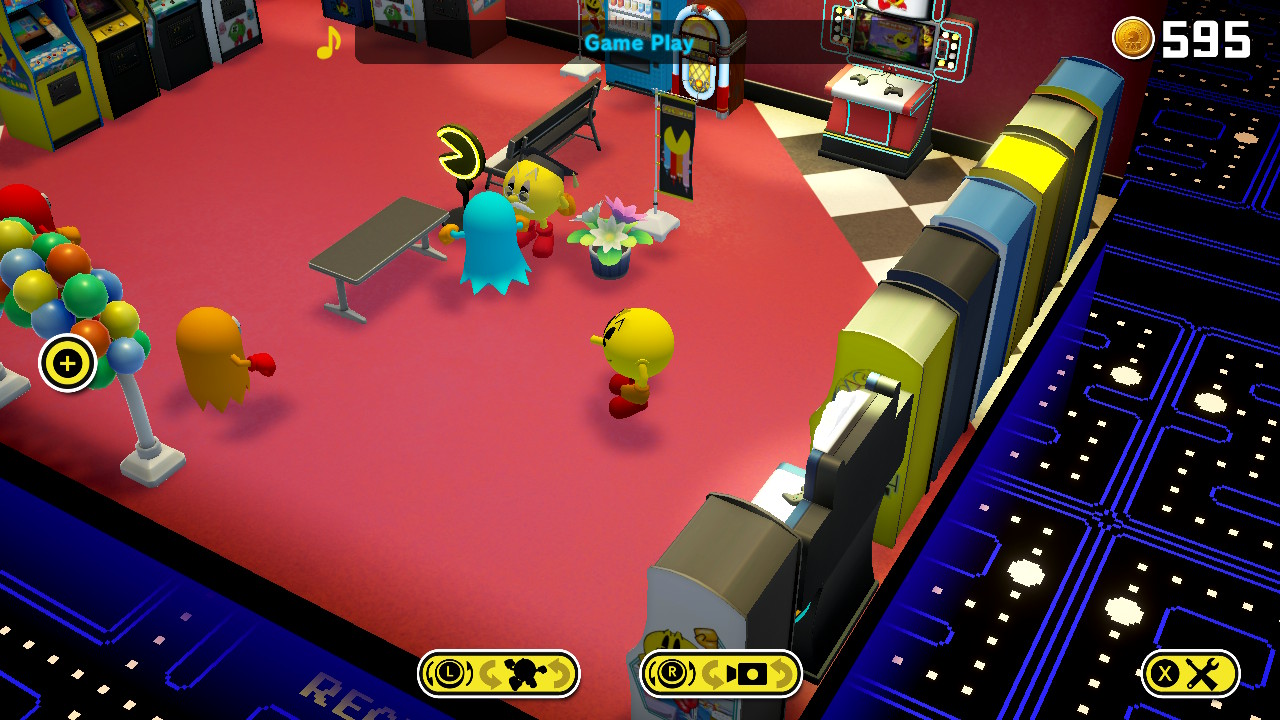 Namco Bandai has done a lot with Pac-Man over the years, including many video games.

At least 16 arcade games, a further 25 or so home console games, at least 21 mobile games, a handful of pinball games… basically it’s a lot of games is what I’m getting at here.

With all that merchandise, with all that cultural apparel, with so many games to pick from, a title like Pac-Man Museum+ should really live up to that museum billing, giving us a rich history of one of gaming’s true leading lights.

Sadly, that’s not really what Pac-Man Museum+ does.

It certainly gets the “a museum is a building” bit right, housing the games within in the context of a virtual arcade of Pac-Man games that you can design yourself within very limited constraints. 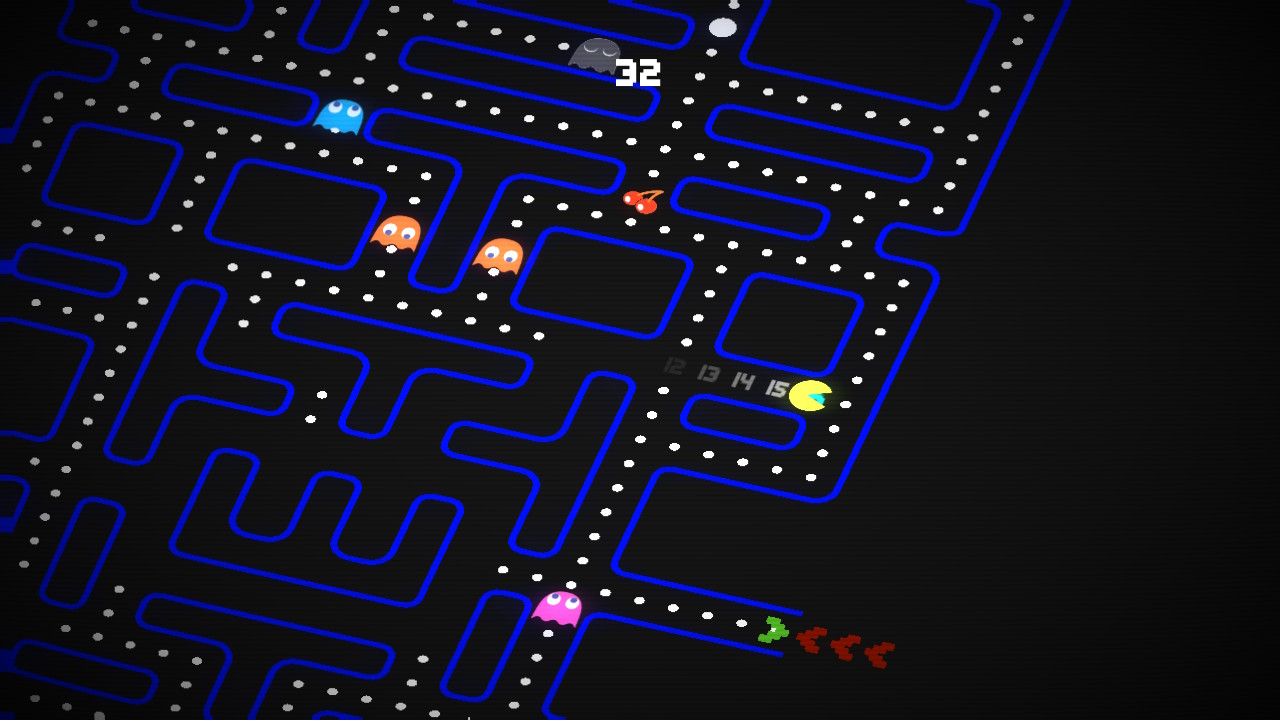 Which on the surface seems like a whole lot of Pac, doesn’t it?

Here’s my problem with it, and it comes back again to exploitation, at least partially. 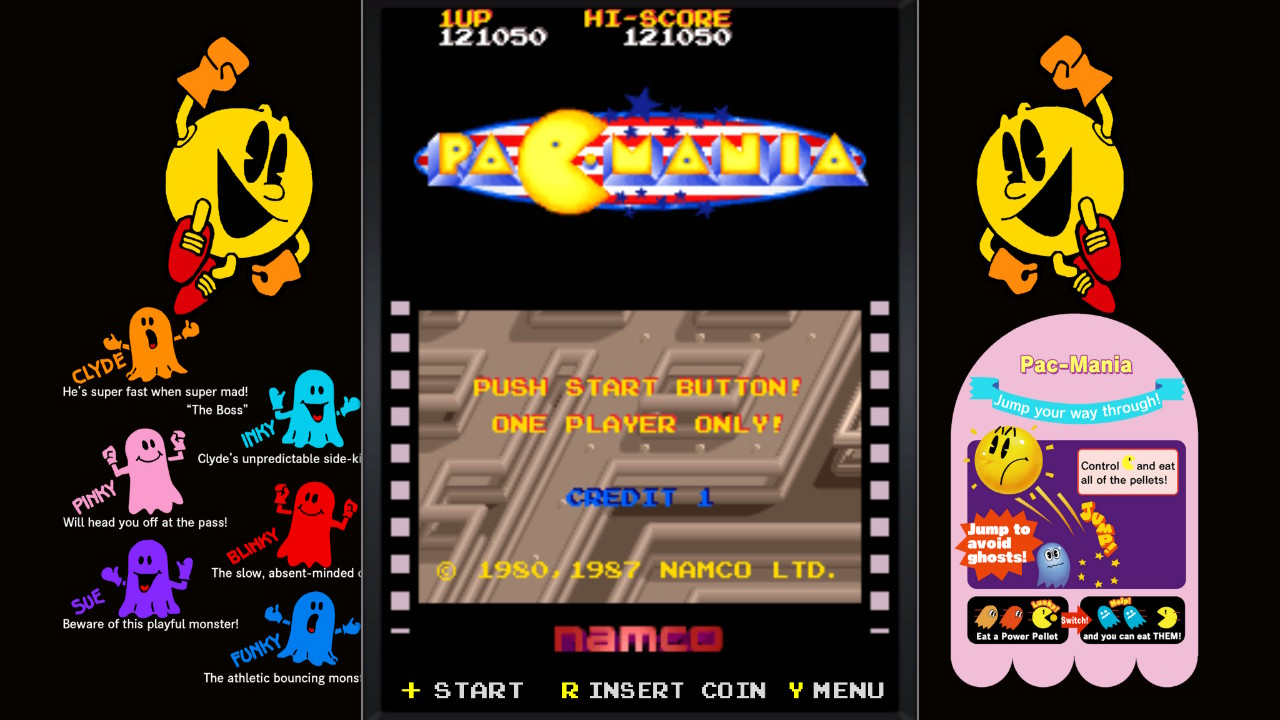 The entire reason that Pac-Man Museum+ is a “plus” version is that it’s already released a Pac-Man Museum title back in 2014 for Xbox 360, PS3 and PC, which had 10 games on board – 9 of which are in this very collection.

You could have also got your Pac-fix in via the 2001 GameBoy Advance Pac-Man Collection, the 2011 Pac-Man & Galaga Dimension cart or the many, many, MANY different ports of Pac-Man and most of the “core” Pac-Man titles over the last 42 years.

It’s not like poor Pac-Man has been locked away in a vault since his early 1980s heyday. He’s been sent out onto the streets by big daddy Namco Bandai to hustle for yen on a consistent basis!

What’s disappointing about Pac-Man Museum+ goes beyond whether or not you’ve got prior Pac-Man collections, however.

It’s the fact that it’s a fairly lazy collection, especially when you consider that 9 of the 14 games in the Museum+ were in the earlier Museum collection. There’s no sign of Ms.Pac Man, for a start, though that’s likely (but not definitively) due to weird ongoing legal issues between Namco Bandai and ATGames, of all people. 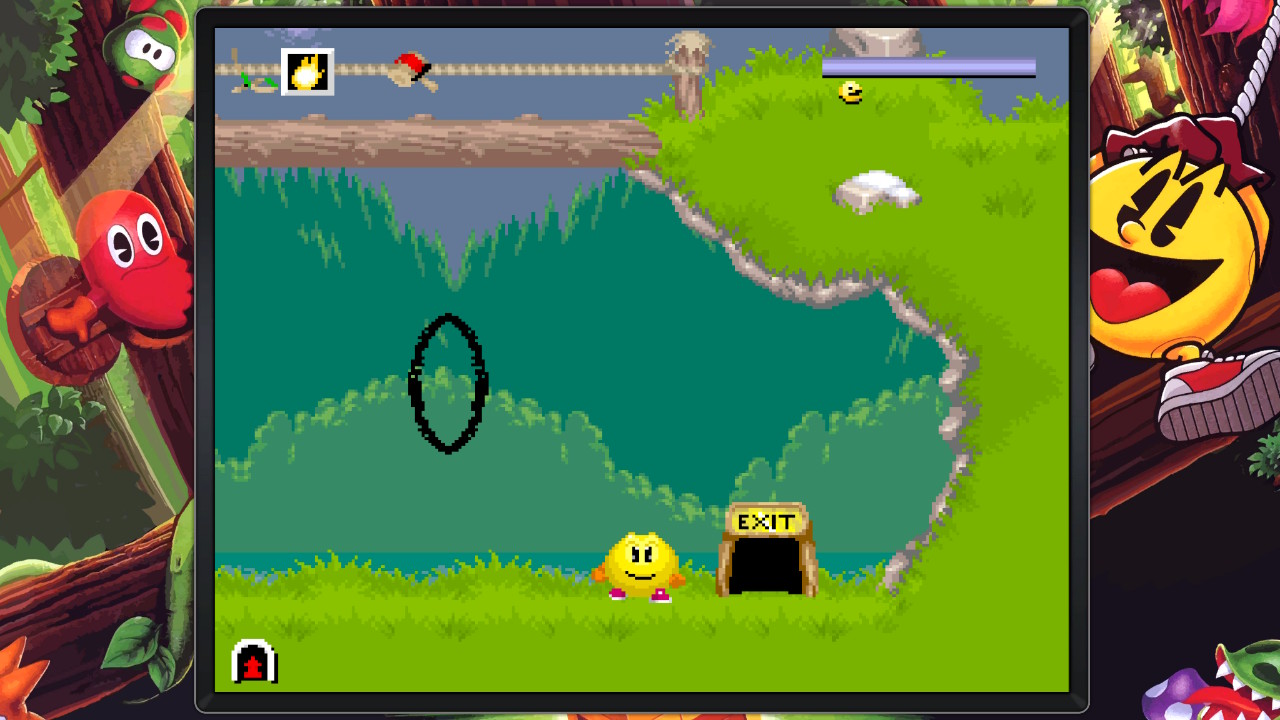 Many of the games here are really good, and have stood the test of time. Classic Pac-Man is still a great game even if you don’t play it via patterns.

The aforementioned Joysticks (seriously, look it up, it’s an awful movie with some great retro games in it) finishes up with a legendary battle in Super Pac-Man. Pacmania has 3D charm, Pac-Man Arrangement – both of them – do clever things with the core Pac-Man formula, and Pac-Man Championship Edition even has the golden touch of Toru Iwatani himself to help it along.

Why is Pac In Time the harder Japanese variant with English subtitles overlaid when there’s a full (if slightly easier) English version already?

Why do none of the arcade Pac-Man titles include a Tate option, especially as that’s a feature of the Arcade Archives version of Pac-Man? 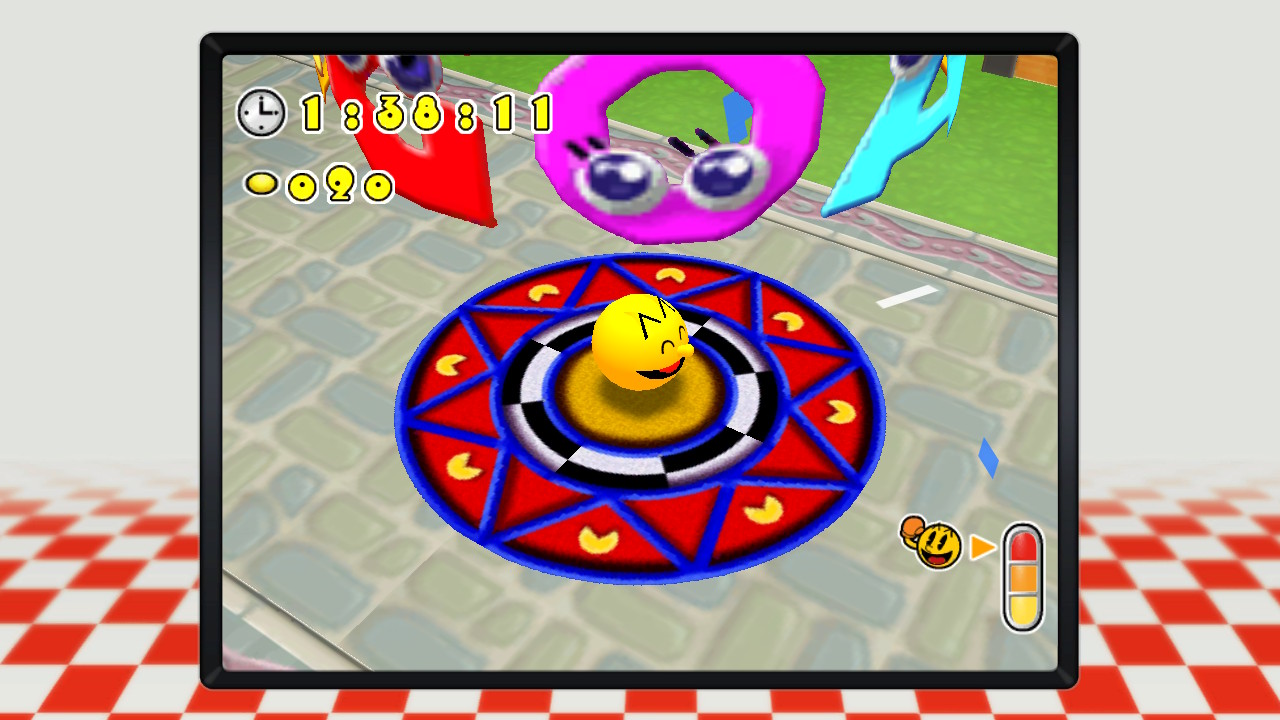 Why not include emulation of at least one of the Pac-Man pinball tables? Or some of the weirder home versions of original Pac-Man?

Sure, the Atari 2600 version is legendarily awful, but that’s the point of a museum, isn’t it? To show the full history, not just a small selection of snapshots.

This is scattered highlights at best, and really just feels like Namco Bandai just wanted a quick Pac-Man title to roll out for the 42nd anniversary with a minimum of overhead work.

The emulation quality within the collection is fine, but very limited. Given so many of the games are score attack games, it’s not reasonable to expect save states or rewind features, but there’s only three screen sizing options on the Switch version as reviewed, and one scan lines option too. That’s your lot.

Oh, and a couple of the games are locked until you’ve played a couple of tries at other games. There’s no rhyme or reason to this, and it took me more than a dozen tries at Pac In Time (one of the weaker Pac games in the museum, mostly because it’s a reskinned earlier Amiga game called Fury of The Furries) for it to accept that I’d played it twice. 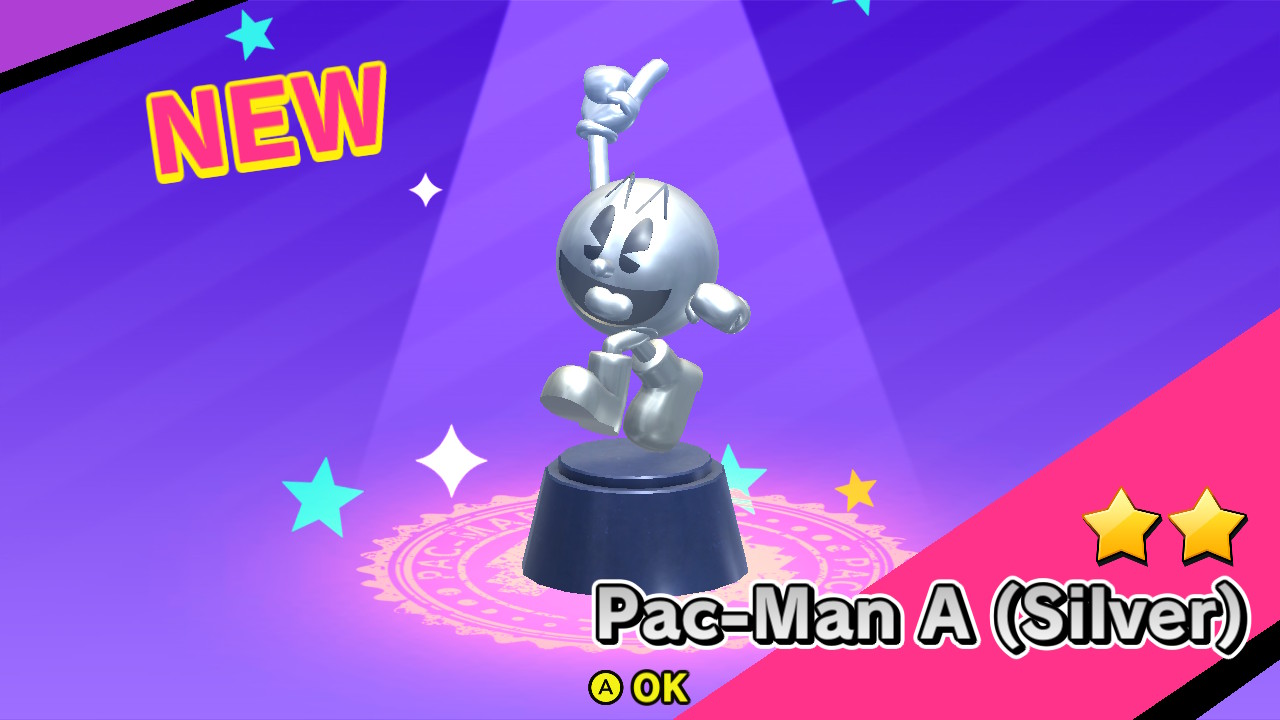 Each game does have “missions”, most of which relate to either clearing levels or hitting high score points. Missions award you unlockable bonuses, but these are either static arcade ephemera or in-game music tracks. Would it have broken the bank to licence Buckner & Garcia’s “Pac-Man Fever”, Namco Bandai?

You might also think that a “museum” title might give you access to interviews, documents, photos and the like to really show off what Pac-Man has been and why he’s such a vital part of gaming history. Over 42 years, countless titles, a few scoring controversies and more, there would be a rich trove of such material, right?

You might think that, but once again you’d be wrong. Once you’ve unlocked the handful of locked down games, the only other attraction within the Pac-Man Museum+ virtual arcade is a gashapon machine. As you win Gashapon, you can display them in your virtual arcade, but all that really does is provide window dressing that gets in the way of getting to the next arcade machine.

All of this might sound like I hated Pac-Man Museum+, and that wouldn’t be essentially true. As long as you like score attack maze games (mostly), and especially if somehow you don’t have a copy of Pac-Man in its earlier iterations in your collection already, it’s a fine grouping of titles that are mostly very playable to this day.

Some are weird – yes, Pac-Land and Pac ‘n Roll Remix, I’m looking at you – and some, like Pac & Pal haven’t aged well at all. Still, there’s plenty of fun to be had here. 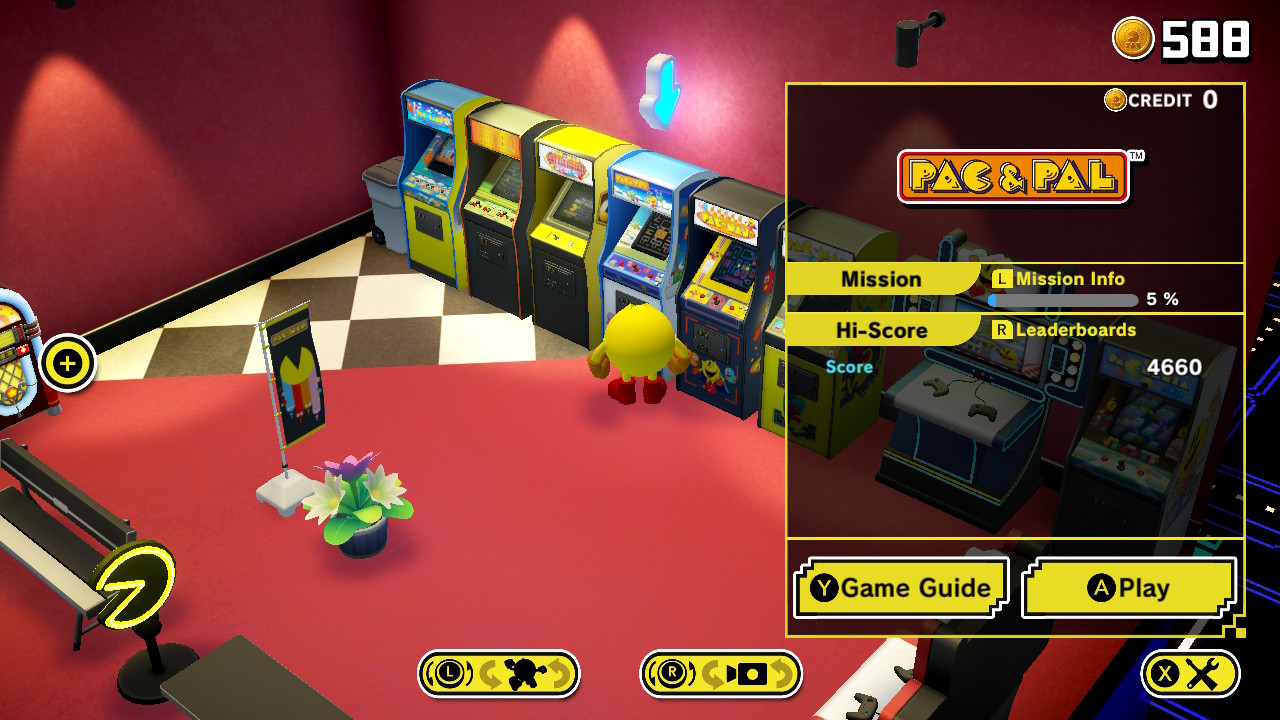 It’s reasonably priced too, with most digital versions running you around $30. Sadly, it doesn’t look like we’ll see a physical release in Australia officially, so you’ll have to import if you still like your games truly old school style.

But still, Pac-Man continues to be exploited. When you look at what’s been done with other retro collections in terms of celebrating their history, it’s hard not to think that he’s being exploited once again here.

Pac-Man’s been through worse, like that Adam Sandler abomination I won’t mention again here. But it feels like gaming’s elder statesman deserves more recognition, and a better museum than this.