The big news in gaming this week is that Embracer Group has gone on yet another one of its spending sprees. This time around it has picked up everything from Tolkien’s Middle-Earth (from film to games), to Snow Bros. (Toaplan, in the company’s first-ever Japanese acquisition), and Limited Run Games (the publisher of short-run physical editions). The response to this news was a lot of chatter on social media and the like and far too much of it was enthusiastic. This is not good. Not for us, as the audience that cares about artistry in video games. Nor for the consumers of content. Not even for the games industry itself. Embracer Group is one of the biggest threats of all to games, and we need to start acknowledging that.

“Ten operative groups. 120 studios. Over 850 franchises,” the company proudly proclaims on its website. The chances are that if you list out our favourite 20 video games of all time, Embracer now owns at least some of them. A lot of what the company sits on is small and “indie.” Some, however, is very big, and since the company does now own The Hobbit, I’ll put this in Tolkien terms – like Smaug, this trash pile of a company sits on an absolutely mammoth horde of gold and has no intention of sharing.

I made a video about why acquisitions suck for the industry, so I’m not going to tread over that ground again – just watch the video below. However, to quickly build on it, there are relatively benign examples of acquisitions, and there are absolutely nasty examples that enter the territory of corporate dystopia. One company acquiring another because it adds to the parent company’s capabilities and provides the company with a strategic resource to make its products better is a relatively benign acquisition. Nintendo acquiring an animation studio makes sense for a company that is, increasingly, relying on the value of its character IP and needs to start making like Disney and Mickey Mouse.

Then there are companies that acquire purely for growth. Companies that have no significant strategic interest in what they are acquiring and are simply looking to gather and horde. Companies that you just know have board meetings where every second word spoken is “content.” Companies like Embracer.

There is no way to make “Ten operative groups, 120 studios and 850 franchises” a cohesive vision. Embracer didn’t acquire Snow Bros., Lord of the Rings and Limited Run Games because it sees some kind of potential for an open world RPG featuring the snow guys teaming up with Frodo to lob snowballs at Sauron, which they will then distribute via a collector’s edition to 1,000 people worldwide. There is nothing that links those properties to any company vision other than “make money, horde money, more and more money.” They were bought because they were IP and Embracer saw dollars. That’s it.

Objectively, as a corporate strategy, doing this works, if for no other reason than you can play some mad-awesome accounting games. You buy a lot of stuff and you start making more money, and that makes the percentages on the annual report look really positive. Embracer’s most recent financial results, posted to its website yesterday, confirm this: “Net sales increased by 107 per cent to SEK 7,118 million (3,433)”. Yes, of course, net sales have increased! If I went out and bought ownership of Edge Magazine, the DDNet publishing arm would suddenly be making a ****load of more revenue. Does that mean the business is that much healthier? No. And we’re getting to why that matters in a minute. 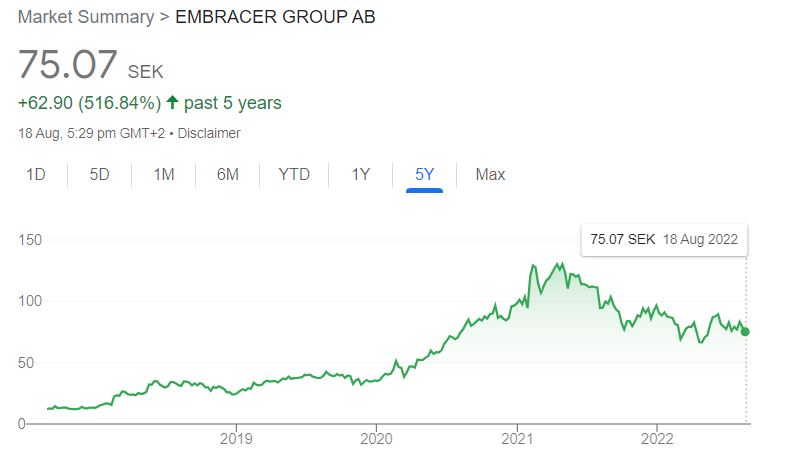 In addition, acquiring stuff does good work for the stock price of a company. I was surprised that there wasn’t a bump to Embracer’s share value yesterday since I would have assumed that the Middle-Earth license in particular would have been seen as a good pick-up by investors, but you can see the long-term effect of the company’s mass-acquisition strategy above. Embracer hasn’t done anything noteworthy outside of acquiring things in recent years. The line trending up over the very long term has to do with that.

The stock value going up is, of course, great news for the executives and board members, who would all hold stock, as well as the investors. In other words, the people who don’t care about anything other than seeing these lines go up. Is it good for games, though? Nope. The more a company acquires the more it sees everything that it owns as a simple commodity, and that means a few things:

I’ve worked for companies that have been acquisition-heavy in the past, and there’s never the sense that there’s any particular creative reason for making them. These decisions are motivated entirely and purely by corporate interests, and if you haven’t figured this one out yet, the corporations in games are not friends to the arts, and also don’t really care about you, other than being a resource for them to tap. To get more money.

Just keep this in mind the next time Embracer waves around all the new stuff it’s added to the loot pile, and remember – that’s Embracer’s loot pile. Not yours. It’s only good for you if Embracer, a global conglomerate, wants to do the right thing.

Tokyo Vice: An American TV series about Japan that is actually worth watching

“We’re screwed. Writing is over. That’s it. It’s time to…

The August 2022 edition of the Dee Dee Zine is NOW LIVE!