Unpacking one of Square Enix's most experimental games in 2022.

We recently reviewed the most excellent The Centennial Case: A Shijima Story, which was a blend of detective fiction gameplay and FMV storytelling. It was a rare treat, as we don’t often get to enjoy FMV games from the biggest of publishers. Though the genre has enjoyed a renaissance, it has been largely the smaller players responsible for it.

Following on from our review, we had the chance to put some questions to Ito Koichiro (the game’s director), and Ehara Junichi (producer) about what they were looking to achieve, the potential of the FMV game format, and just how different it was to develop this kind of game.

Matt S: The “FMV game” has experienced a renaissance in recent years. What do you think is driving renewed interest in this approach to game storytelling?

Junichi E: I think it’s because gamers want to see a wide variety of styles in games, and there’s something undeniably fun about seeing your choices reflected in video footage, right?

Koichiro I: The idea that games have to be an interactive medium may be becoming somewhat blurred.

Personally, I want games to be a series of interactions – and in that sense, The Centennial Case: A Shijima Story is clearly a standard game. However, I feel like there might be some players these days who want to play at a more relaxed pace, in the same kind of way you might watch a film or TV drama. 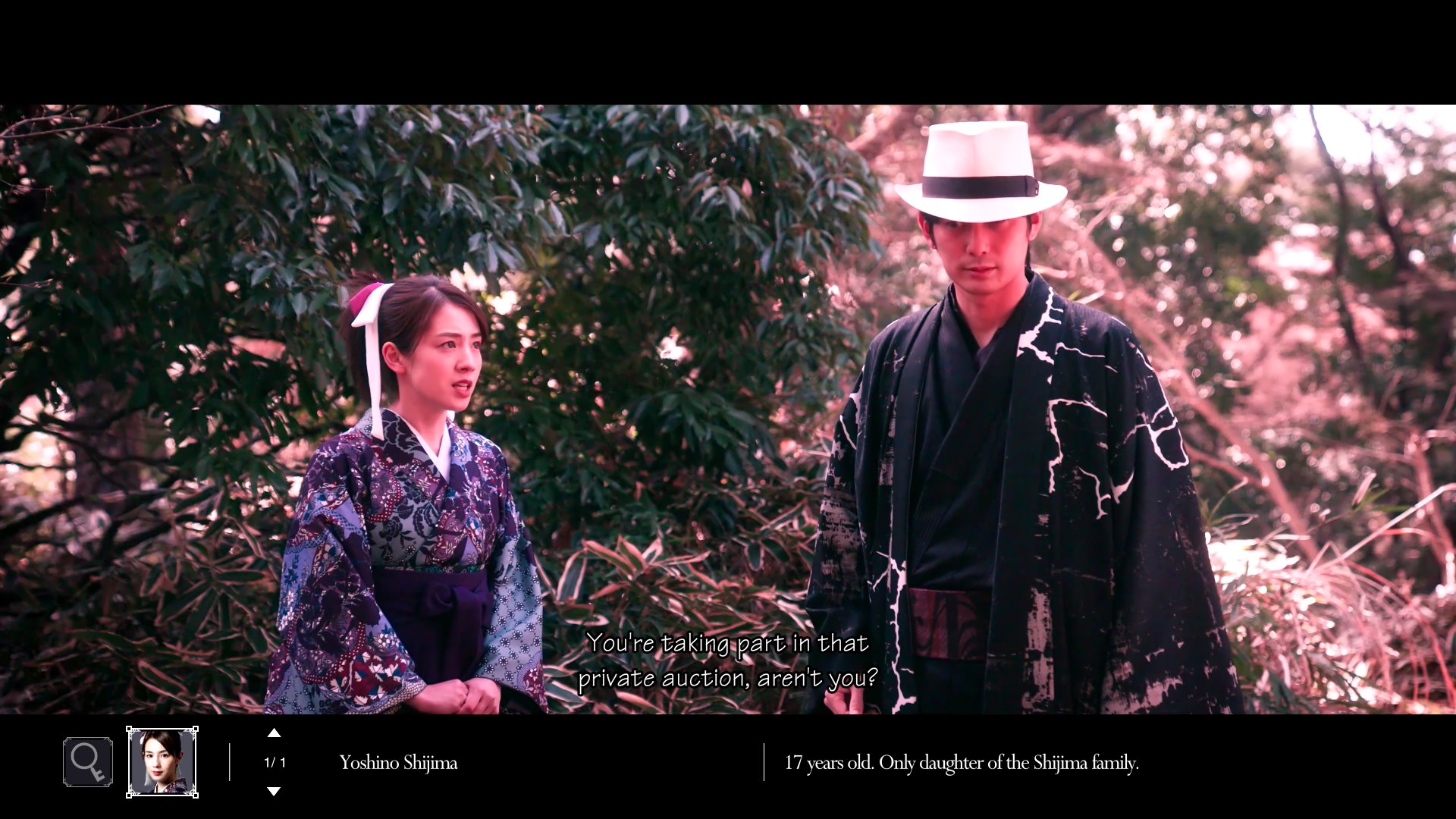 Matt S: Mystery is difficult. You need to challenge players so that they feel rewarded and “smart” when they solve the mystery, but at the same time, you don’t want them to get stuck and frustrated with the experience. What approach did you take to finding that balance?

Junichi E: As you say, this is difficult.

For The Centennial Case: A Shijima Story, I asked the Square Enix quality management team to play the game multiple times. In light of their feedback, I then asked Mr Ito and the team to adjust the difficulty to sit at a level that could be universally enjoyed.

Koichiro I: We included a hint feature that wouldn’t impact the player’s rating. If there’s anything you absolutely can’t figure out, you can use this feature. Players who want to test their own reasoning skills can take on the whole game without using this feature, but we took care to make sure that players who want to focus on the story rather than the reasoning itself would still be able to experience that feeling of becoming a detective. Adjusting the difficulty to match the player is something that can only be achieved in a game, and I believe that developing this kind of system further could make mystery games even more fun.

Matt S: What kind of mystery stories inspire you? Is this a Christie, Ranpo or more modern take on the mystery genre?

Junichi E: I think you’ll be able to feel the influences of Agatha Christie and S. S. Van Dine in The Centennial Case: A Shijima Story.

One reason for this is the fact that these kinds of stories are popular in Japan.

Koichiro I: I love the Kosuke Kindaichi series by Seishi Yokomizo. The premise in this game of a historical family in the countryside, trapped by their own outdated traditions, takes a lot of influence from these works.

Edogawa Ranpo made his debut as a detective novelist around 100 years ago, and this is known as the birth of the mystery novel in Japan. Although it may be a little presumptuous, we decided to use this year – the starting point for this illustrious history – as one of the settings for The Centennial Case: A Shijima Story.

Matt S: Why was it important to have this game set across multiple time periods – what does that add to the game’s theme and narrative?

Junichi E: If we were going to be making a live-action game, we thought we needed an appropriate hurdle for gamers to appreciate our commitment to this concept.

In certain ways, recreating Japan as it was 100 years ago is more difficult in live-action than it would be in CG – so we thought this counted as an appropriate hurdle.

Of course, we also wanted players to enjoy the aesthetics of a retro Japan.

Koichiro I: When writing a story on the themes of aging and agelessness and life and death, the narrative naturally needs to span a long period of time. From that perspective, it would have been more than enough to simply show the modern era and the era of 100 years ago, but we chose to add a point right in the middle as well, in 1972. This was because, rather than portraying two points in time in a two-dimensional, disconnected manner, we wanted to use the unique visuals and sounds of 1972 to portray the changing of the times, using it as a bridge between the modern era and 100 years ago.

Matt S: What do the supernatural elements add to the experience?

Junichi E: The mystery genre has explored and exhausted all kinds of techniques – having some kind of quirky element to the plot makes it easier to create an original story. However, such elements must not be to the detriment of the mystery game, making it feel unfair. So, we took care with the methods by which we incorporated these elements.

Koichiro I: “Agelessness” is a supernatural theme, but I don’t think it’s entirely beyond the realm of possibility – it’s said that humans may one day live to 150 years old, thanks to medical advancements. Although I believe being able to live a long life is great, not everything about it may be good. For example, if, hypothetically, there was a large gap between your lifespan and that of other people – how should you interact with others? It may be that the longer you live, the more people you have to watch die. These were the kind of ideas we came up with when we chose agelessness as a modern theme for the story. 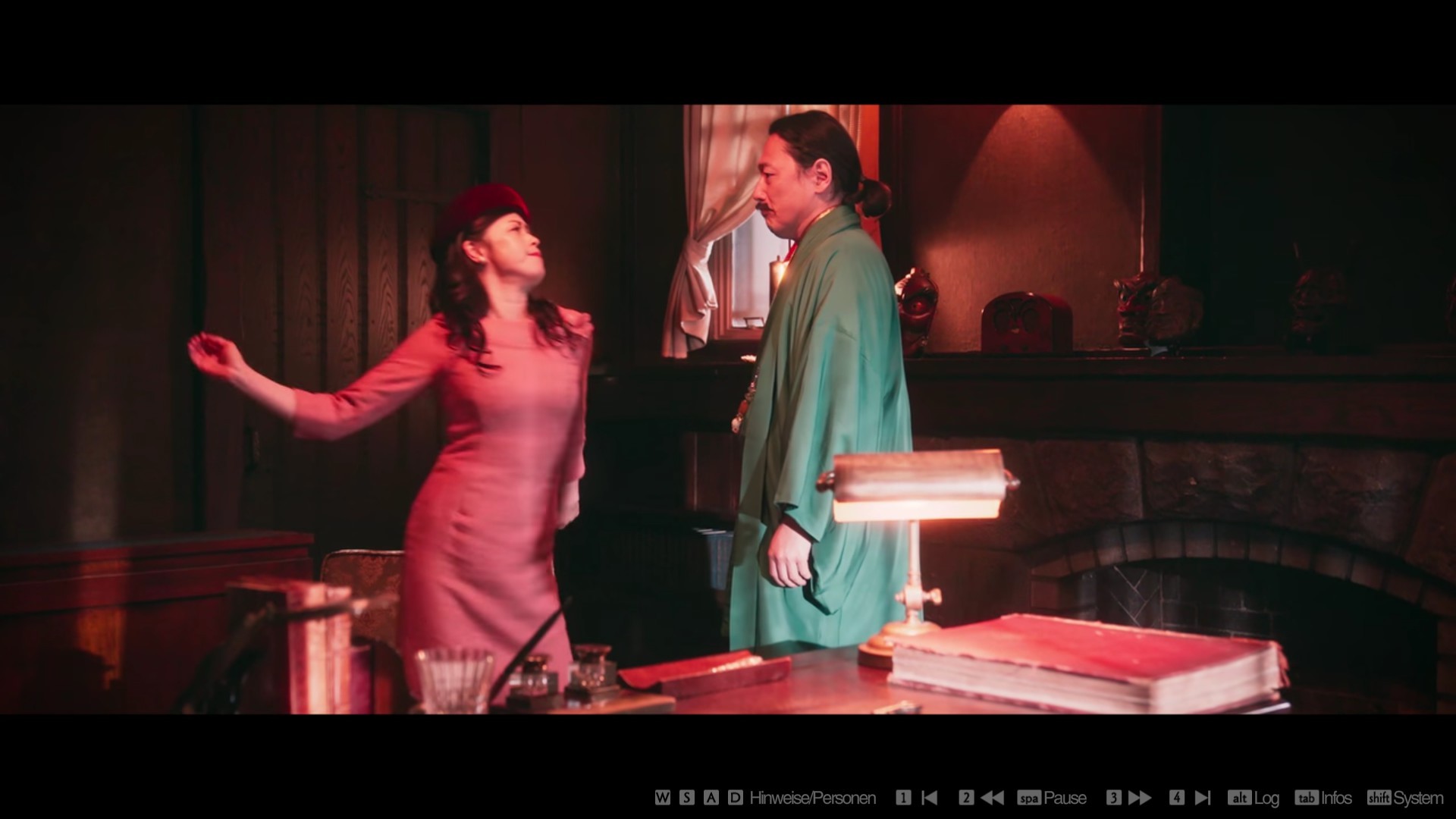 Matt S: One of the challenges with FMV games is giving players a meaningful sense of agency – with video being a linear medium but the expectation being that games are non-linear. How did you look to resolve that challenge?

Junichi E: We thought that it was vital for the player to feel a close emotional connection with Haruka Kagami, who acts as the player’s eyes in the story. If this connection fades, then suddenly the player will lose that sense of agency – it will just feel like watching a film or drama.

Koichiro I: One of the reasons we chose the mystery genre was because we wanted to resolve this issue as far as possible. In mystery games, the player can constantly pursue the puzzles and mysteries in their mind, even when they’re not directly pushing buttons. If we can change the action from “just watching” something to “carefully observing” something, I believe that makes even linear videos more enjoyable.

Matt S: Why do you think audiences might be partial to a game featuring real actions and film settings? What does this approach to making games allow you to do that conventional video game character models and CG renders does not?

Junichi E: The Centennial Case: A Shijima Story has a unique device that uses live-action, so I hope you’ll play it for yourself to find out more. Additionally, I think live action is well-suited to portraying human drama.

Koichiro I: I feel like live-action has a certain appeal that you don’t find with photo-realistic CG graphics. At this point in time, I think it’s still easier to depict subtle movements of the eye, breath, and the warmth of a character’s skin in live-action.

Also, I think it was effective to use real actors to portray the story, when one of the themes is life and death.

Matt S: How do you think FMV games might continue to develop as an art form into the future?

Junichi E: I can’t speak to the medium as an art form, so please allow me to refrain from commenting.

As an individual gamer, though, I hope to see more and more interesting games!

Koichiro I: As we worked on The Centennial Case: A Shijima Story, we kept the fact that it was a game at the forefront of our minds. However, if we see a future trend towards games that don’t particularly demand gameplay, then I think we could see FMV games developing into more of an extension of films and TV dramas.

On the other hand, I also feel like if photo-realistic CG becomes able to depict characters with more humanity than even live action can, then live-action games may not end up developing much, continuing steadily as a kind of nostalgic method of presentation.

Matt S: Finally, what are you most looking forward to people experiencing in The Centennial Case?

Junichi E: I really want people to play until the very end and see for themselves exactly what devices we’ve planted – both in terms of the game, and the story.

Koichiro I: The ceremony where the characters float lanterns downstream to convey their thanks to the souls of the dead and send them on their way to the world beyond. I would be delighted if this creates an opportunity for people to think about the past that we’ve inherited from others, and how we pass it along again to the future.

Life is Strange 2 is a bit of an anomaly…

We had a special guest on the Digitally Uploaded podcast…