I already need more of this FMV whodunnit!

Square Enix is one of those companies that I tend to trust (at least, until the company starts doing NFTs) so I was beyond excited to learn it was publishing an FMV whodunnit, The Centennial Case: A Shijima Story. It combines FMV with a puzzle-like scenario required to solve every case. I had high, high hopes for this game, and was excited to find out if I was right. Just a quick note before I begin: Square Enix very much wants the world not to be spoiled (I can’t even take my own screenshots!), so when it comes to plot specifics I’m going to be pretty vague.

The game follows mystery writer Haruka Kagami and her scientist partner, Eiji Shijima, as they try to discover the secrets of the Shijima family. It all begins with the Fruit of Youth, and Eiji wanting to know if it actually exists so he can study it to stop the aging process. It quickly turns into multiple whodunnits, as there have been many suspicious deaths taking place in and around the Shijima family. Haruka is the main detective, while Eiji has a supporting role despite being the key to the family. He knows the science behind things, which is why Haruka relies on him. The bulk of the solving is on her, though, as it happens in her mind (her “Cognitive Reasoning Space”) and she imagines what Eiji would have to say.

The Cognitive Reasoning Space is intense. The closest thing I can compare it to it Sherlock Holmes’ Mind Palace in the Frogwares series. In it, Haruka pieces together clues to form hypotheses, and hypotheses to solve mysteries. It’s a bit complicated to describe, so definitely check out the latest trailer (below) to understand what I’m talking about. There’s a board of hexagonal tiles on the left side, with some tiles highlighted as mysteries. There are blank tiles around the mysteries, and these need to be filled with clues. Clues are found by scrolling through each scene of the chapter and picking out what’s most important. The best part is that you can’t put the wrong clue in the wrong place, it will only snap if it’s correct. So if you’re stuck, trial and error is more than enough. Clues can be helpful or steer you in a completely wrong direction (no, nobody threw a sword through the dead guy).

I’ve gotten a little bit ahead of myself though, as to get to that point you need to play through the FMV sequences! Each mystery plays like a little mini-movie, when the player is offered a few scattered choices but mostly just sits back and hits the triangle button when clues pop up. If you miss a clue, it will still appear when you’re doing the reasoning portion of the game, so slow reflexes aren’t the end of the world (that and they’re up for a reasonable amount of time). In fact, there is never any sort of time pressure to make any decision. That’s my kind of game!

Related reading: If you also like whodunnits, Agatha Christie: The ABC Murders may be of interest! Our review here.

There are specific rules to solving the mysteries that help make the right path a bit more obvious. One, there is only one killer per case (no accomplices). Two, superhuman or paranormal activity can be ruled out (no, nobody has superhuman strength). Third, those who appear to have no reason to kill the victim might be hiding an ulterior motive (can confirm, motive means less than the facts sometimes). If you get the killer wrong, you can keep trying. The only thing that happens is your rank at the end of the chapter goes down the more mistakes are made.

The actors play different characters in different eras, so that Haruka can visualise what she learns to help solve the case. The acting itself is quite over-the-top, but I maintain that’s what I crave and expect from FMV games. I want them to verge on being soap operas, basically. The original Japanese voice track is easily the best, as there is something that sounds kind of silly with the English dub; I think it’s just because the game is so inherently Japanese that the English language stands out as unnatural and doesn’t do it justice. 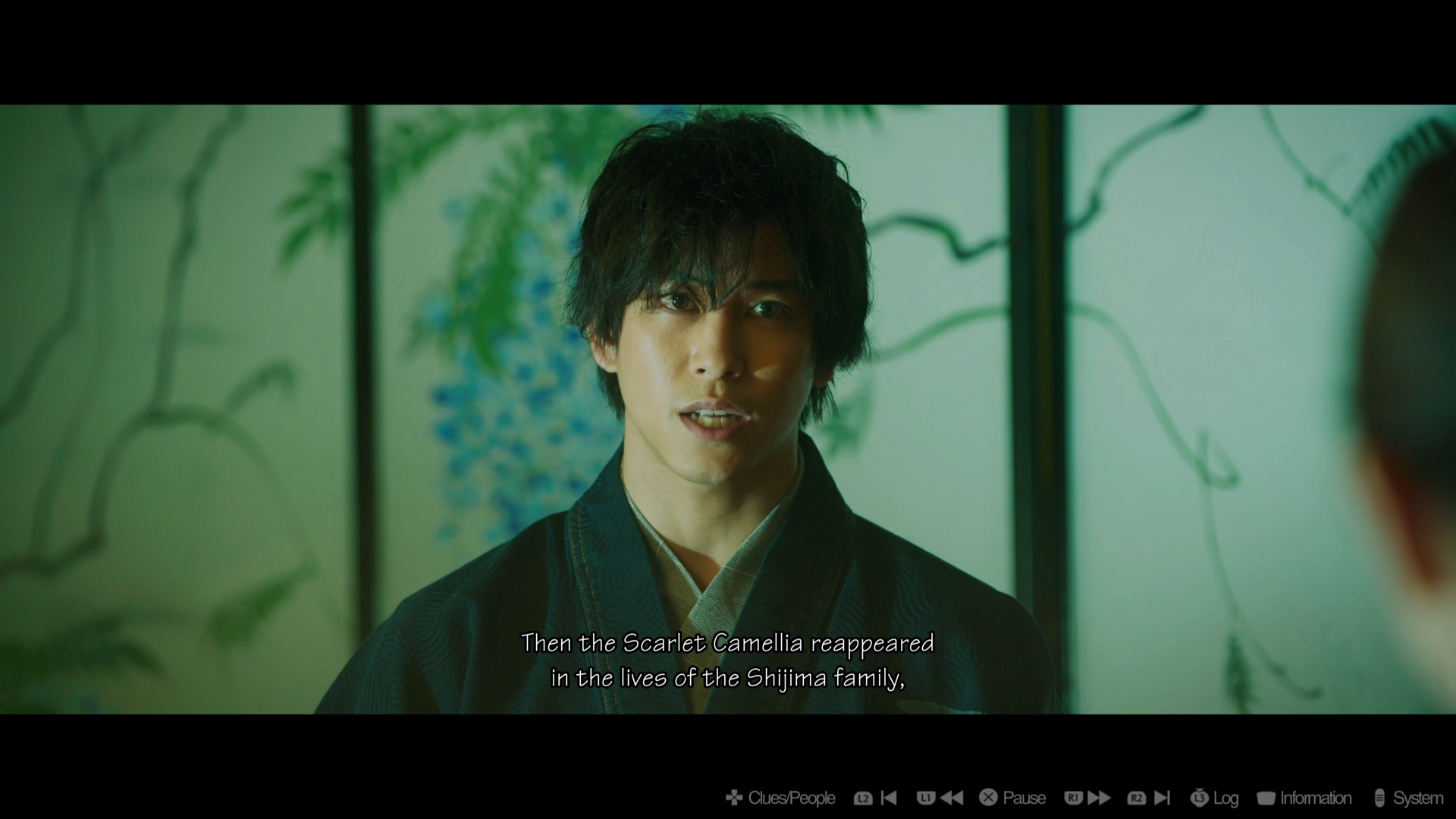 I compared Haruka’s Cognitive Reasoning Space to Holmes’ Mind Palace in a completely different series from a completely different developer, but that’s not where the similarities end; the way the mystery unfolds, the little hints along the way, the red herrings – The Centennial Case: A Shijima Story actually remind me of the original Sherlock Holmes narratives. The game plays like a mystery novel reads. There is something classic about the way the clues are dripped out little by little until all of a sudden you realise you’re collapsing under the weight of them all, needing to sort them out. Good thing there’s that Reasoning Space!

The Centennial Case: A Shijima Story has one of the beefier information menus I’ve ever seen, and I mean that in the best way. It’s got everything you might need to look back at to help solve a case. The relations screen shows who is involved in what case. There’s also lists of mysteries, clues, and hypotheses divided by chapter. There’s a handy timeline that helps makes sense of jumping back and forth through the decades.

The game doesn’t have a lot of accessibility options, just closed captioning. It would have been nice to at least have a way to make text bigger, as on some screens there’s a lot of room and teeny-tiny little text. If I spend too much time in the Cognitive Reasoning Space (and I’m quite slow), I get pretty bad headaches, though I’m not sure if that’s text-related or movement-related (things scrolling vertically and horizontally at the same time can mess with me sometimes). Regarding chronic pain issues, none of the gameplay really caused anything to flare; the FMV sequences are pretty chill to control. 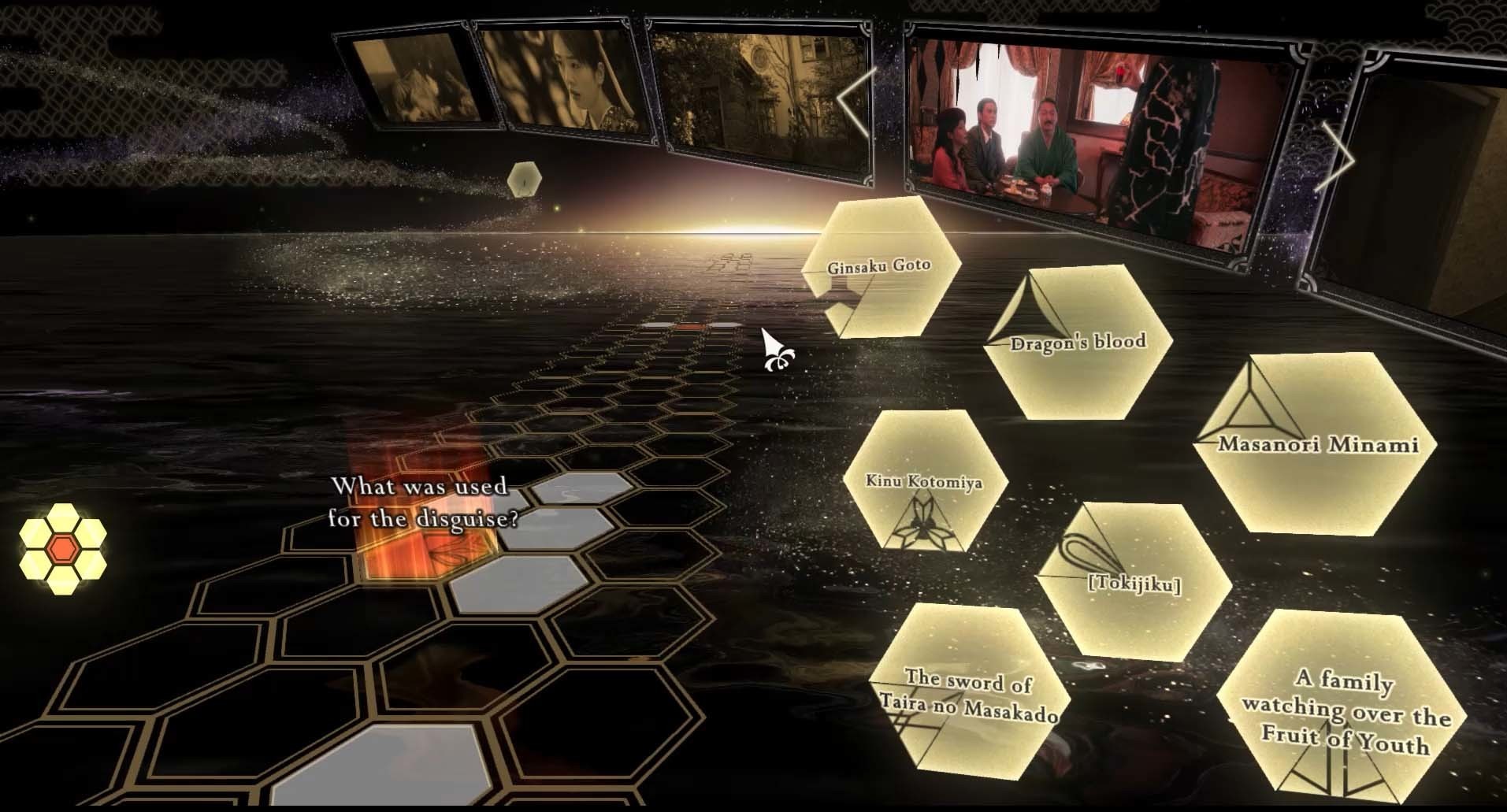 There’s something about the title – The Centennial Case: A Shijima Story – that makes me think this one game may only be the beginning of something wonderful. Maybe the Shijima family has more mysteries? Maybe other families need Haruka and Eiji to solve their mysteries? Maybe I’m just so obsessed with the game I need more of it? Yeah, that last one sounds pretty plausible. But the game is basically foolproof (unless you mess up really, really badly, which in my experience isn’t terrible likely), it’s in the FMV genre, it’s a whodunnit, it plays like a novel reads… who doesn’t want more games like that?!