Happy Birthday, Game Boy! These are 10 classics we want back

The joy of games was simpler then.

It’s the Game Boy’s birthday this week. It was released in Japan on April 21 back in 1989, and remains one of the all-time great consoles, both in terms of the games that were released on it (so many are still highly playable to this day) and the impact that it had on the industry. It was the first real proof of what a handheld console promised.

While we don’t usually give credibility to “leaks” and “rumours,” a couple of days ago it was widely reported that the Switch has emulation for the Game Boy coming, likely as part of Nintendo’s subscription service. Given the timing of the birthday with this news, we figured we’d do a little list of the ten Game Boy games that, firstly, will hopefully get a release on the service if it eventuates, and secondly, you should absolutely make sure you play if they do.

The Legend of Zelda: Link’s Awakening is, to my mind, still the very best Zelda game of all time (the colourised remaster on the GBC is slightly better thanks to a couple of bonus features, but I’m counting the two as effectively one game here). A surrealistic, dream-like Zelda that crunched down everything that people loved about A Link to the Past on the SNES in a way that made sense on the Game Boy, this was a huge game, with the massive overworld, intricate dungeons, and gorgeous aesthetics. It is a wonder how it was squeezed onto the Game Boy at all, and the fact that all the developers needed to do with the Switch remake was 3D the graphics, leaving the rest of it untouched, is testament to just how timeless this game really is. 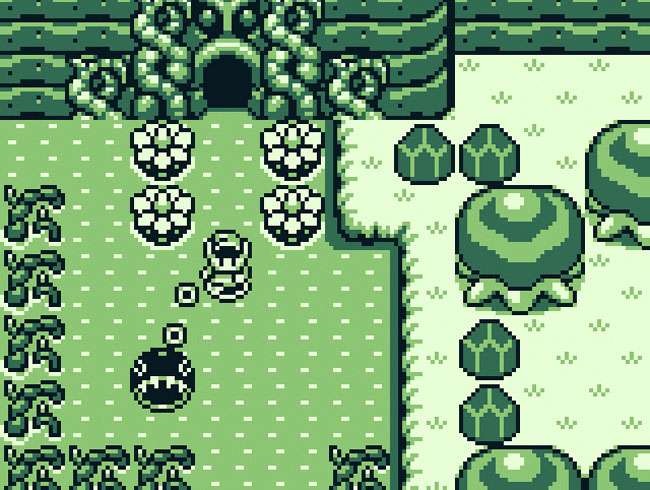 These three games started the entire phenomenon, which has gone on to become the biggest multi-media property of all time. It might look and sound humble now, promising “just” 150 monsters to catch and battle and a relatively small world to explore, but back in those days, tracking down the three hidden great birds, carefully raising up a team of level 99s for competition over link cable, and even the anti-climatic reward for getting every single Pokémon, made for an experience that was all-consuming and endlessly expansive on a handheld. I suspect most hardened Pokémon would find it difficult to get into these games now, but they’re worth it, just for their sheer historical value, and to see just how far the property has evolved. 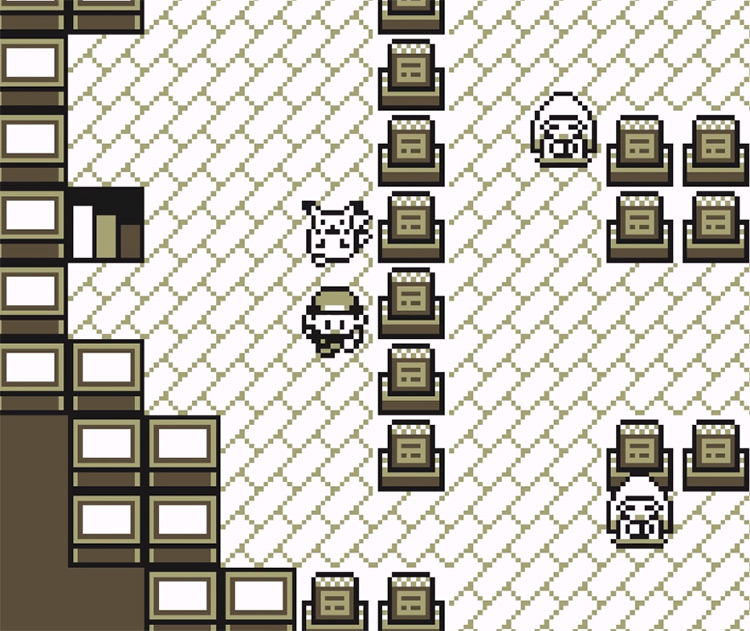 Technically this is a SaGa game that was given the “Final Fantasy” name to appeal to the western audiences, but I didn’t care either way as a kid. All I cared about was the fact that I was sitting there in bed, with my Game Boy, playing an epic, time-travelling JRPG, with turn-based combat and everything. When I replayed the game in the SaGa Collection that Square Enix released on Switch a while ago, I realised just how limited it all is, but back then, this was such a monumental achievement that captured my imagination like none other. It is very much worth experiencing yourself now, just so you know what the very first JRPGs on handheld consoles were like. 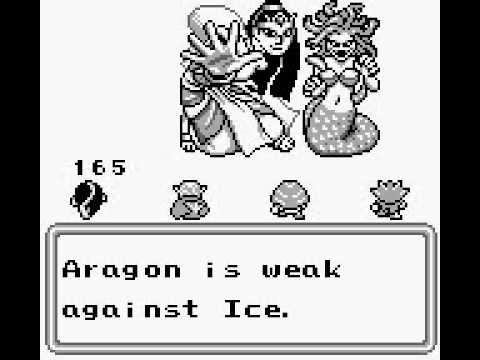 Kung-Fu Master is Irem’s largely forgotten brawler/platformer. Unlike the brawlers you’re probably more familiar with, rather than “free” movement, enemies run directly at you from both directions and you need to punch or kick them before they “stick” to you and start doing damage. As a result, there’s a rhythm to playing Kung-Fu Master well, and the difficulty of it and its bosses makes it a strangely compelling challenge in 2022, despite its extreme simplicity. I actually think the Game Boy version is the best of this little series, because for some reason it has the Bruce Lee license (the other Kung-Fu games don’t) and that was a pretty cool bonus for handheld gamers. 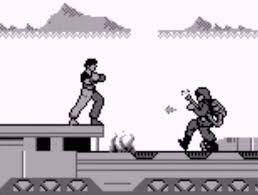 Nintendo released a lot of platformers on the Game Boy. It was a genre that was good for the handheld console and Nintendo has always been the master of the genre. Wario Land was always my favourite because it had a “money-collecting” secondary task that I just loved. After Wario completes a level, he banks all the coins he earned. After he defeats the final boss, he buys himself a “castle” with the cash he has earned, and they range from the cartoonishly terrible (trying to do a “no money” run in this game was a lot of fun!), to the cartoonishly over-the-top (there was a cheat you could use to give yourself maximum money each time, otherwise this would take way too long to unlock). To this day I would have to say that it is one of the finest examples of a secondary objective being superior to the game’s main goal. 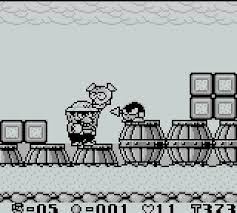 There was a Harvest Moon for the Game Boy! It is the most simple Harvest Moon of all, but for anyone who finds catharsis in the core loop of collecting eggs and milk, planting and watering turnips, and then eventually shipping it all off for cash, Harvest Moon is in many ways the purest realisation of that. There’s no town to wander around, nor land to explore beyond your farm. It’s a much more focused “farming sim” and while I would never complain about the way Harvest Moon/Story of Seasons has evolved since, I also must admit that this game is high on the rotation on my emulation consoles simply because it’s such a relaxing and uncomplicated little loop for a half-hour gaming session. 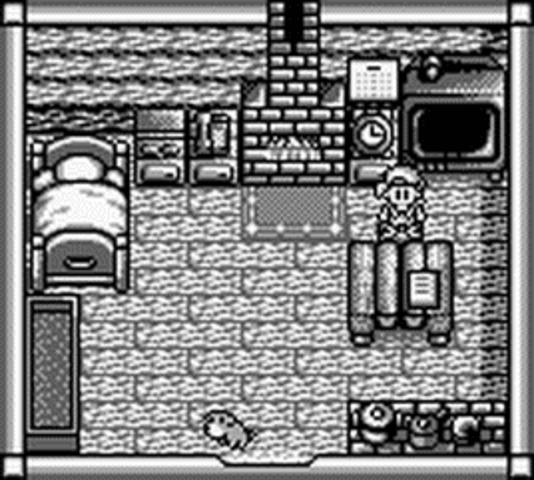 I once saw this described somewhere as “if Dynasty Warriors were on Game Boy it would look like this.” It’s a pretty good representation of Mercenary Force, which is a scrolling action game where you recruit various units (each with their own special abilities), and then control them as a “force” as they mow down armies of the enemies. As enemies are defeated, they’ll drop coins, which can be used to replenish defeated forces, and that little bit of strategic texture, as simple as it is, in combination with the period-piece setting, made Mercenary Force my favourite side-scroller, as other people were playing space-era stuff like R-Type on their Game Boys. 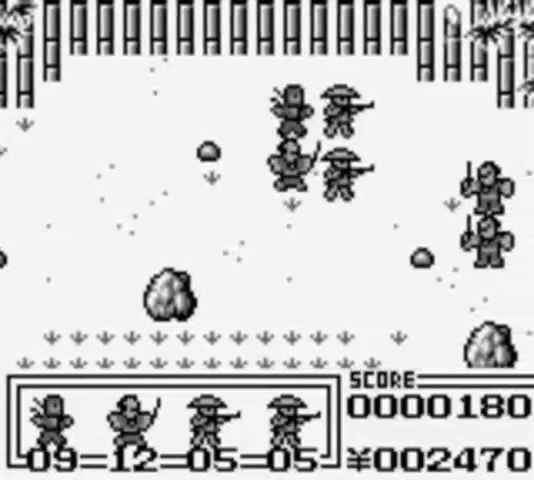 What if Bubble Bobble got better? That’s basically what Snow Bros. Jr is. It’s a “demake” of a largely forgotten arcade game, and while it is a clone of Bubble Bobble, it has merits of its own, especially with regards to the boss battles. Additionally, while Bubble Bobble’s Game Boy port was horrible (taking a single-screen platformer and turning it into a scrolling screen game is not a good idea), Snow Bros. Jr, while less of a true port of the arcade original’s levels, has been better developed for the Game Boy platform. 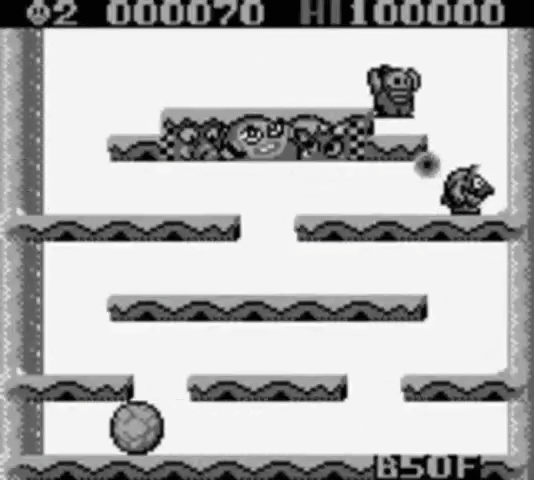 Penguin Wars is one of those often-forgotten arcade games that is a lot of fun when you re-discover it (or play it for the first time). It’s basically dodgeball over a table. You square off against one opponent and start throwing balls at each other. The goal is to get all ten balls on the table down your opponent’s end, and the most effective way to do that is to hit your opponent with the balls that you throw, as that knocks them out for a few seconds, allowing you to get the edge by tossing a few more balls their way. Because of the simplicity of this game, the Game Boy version is minimally different. The physics are not quite as robust as the arcade game, but all the action is there and the format makes it perfect for the handheld experience. 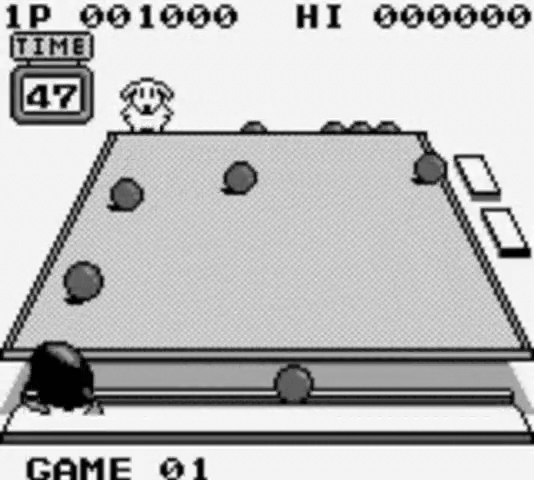 Finally, another great (though these days largely forgotten) arcade hero, Q*Bert is all about jumping over staircase-like levels, turning blocks into various colours by landing on them, and avoiding the various enemies that bounce around too. Q*Bert on the Game Boy went a bit further, though, by introducing a great (and very amusing) reward for playing well; after every couple of successful levels, you’d get a short clip of “Q*Bert The Movie”, which was actually some little cut scenes that told the story of Q*Bert’s battles with a palm tree that liked dropping coconuts on him. With the appeal of a high score being greatly reduced on a single-player device like the Game Boy, working towards seeing the next scene of the “movie” was a brilliant way for the developers to take the arcade game and give it greater relevance on the console. It was a really funny little narrative arc, too. 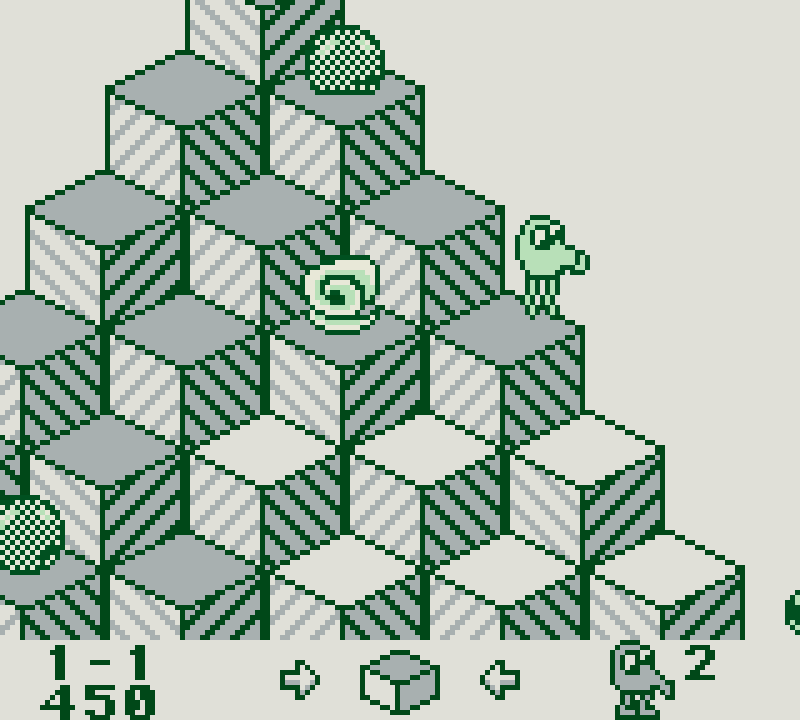