A star-studded whodunnit where they're all terrible people.

Everybody’s family has their own black sheep – at least one person that just doesn’t fit in with the others. I’ve always felt like the black sheep of my own family, though sometimes I think it’s all in my head (I’m the shy, awkward, weird one). Regardless, playing Who Pressed Mute on Uncle Marcus? makes me feel a thousand times better about my place in my extended family, because at least we’re not like the one featured in the game. Somehow they all seem to be the black sheep in their own ways. And to call them dysfunctional would be the understatement of the year, especially considering one of them has poisoned dear Uncle Marcus, and he’s about to die unless you can give him the correct antidote. The real premise of the game, though, is to figure out whodunnit.

Who Pressed Mute on Uncle Marcus? is the latest title from Good Gate Media and Wales Interactive, a pairing that has made other phenomenal FMV games, including The Complex, Five Dates, and Night Book. Like Five Dates and Night Book, the entire game takes place via various webcam streams. This time around, instead of finding true love or avoiding the supernatural, it’s family game night. The main character is Abby, a young woman who doesn’t quite fit in with her mostly boisterous family. The titular character is her Uncle Marcus, another person that doesn’t fit well within the family unit; in fact, he’s mostly hated. So hated that someone poisoned him at a family meeting a few days back, and that poison is about to take his life live via webcam unless Abby can help solve the crime.

Family game night is an annual affair on Abby’s mum’s birthday. Her mum is remarkably self-centered. Her sister isn’t any better. Nor is her aunt. Or either of her cousins. The only seemingly sane, empathetic person in this family outside of Abby is her Nan, a very sweet woman that makes you feel comfortable in her presence. The rest of the game, I spent in discomfort; I can only assume this is intentional because it helps increase the dramatic effect. Uncle Marcus remains in the background as Abby plays trivia games with her family while individually pumping them for information that may relate to the murder.


Who Pressed Mute on Uncle Marcus? plays similar to other FMV games by the same developers: there’s a bunch of talking, then the player can choose between two things to say, and the conversation moves forward. There is a streaming option in settings that will remove any time limits to these responses. I’ve talked about this option before, as I believe it’s incredibly helpful for those like me whose cognitive and motor abilities sometimes just… stall. It gives me time to think it out and be sure I select the right option. Otherwise I tend to panic and choose whatever, and in a game where choices must be methodical that can cause chaos.

After each scene, a screen will pop up letting the player know how much evidence was available to be found, and which of those they actually found. It’s actually remarkably hard to push for information from people when you only have a couple of options for what to say to them at any point. Also, different information will come from different people at different times, which leads me to something I really like about the game.

You’ll have to play it over and over. One playthrough only takes about 45 minutes, but it won’t be enough to find evidence to point a finger at whodunnit. So odds are, Uncle Marcus will die and the killer won’t be found. After that, it’s time to restart. Starting a new game will keep all the previous evidence (unless you chose to delete the whole thing, which is possible), and its the sum of it all that will point to the killer. Saving Uncle Marcus is a bit easier, as there are only three antidote options and you can just pick one per playthrough until you get it right, then keep choosing that one later on. Honestly, I always think it’s a bit genius to build replays into the game in a way that isn’t just time-looping. 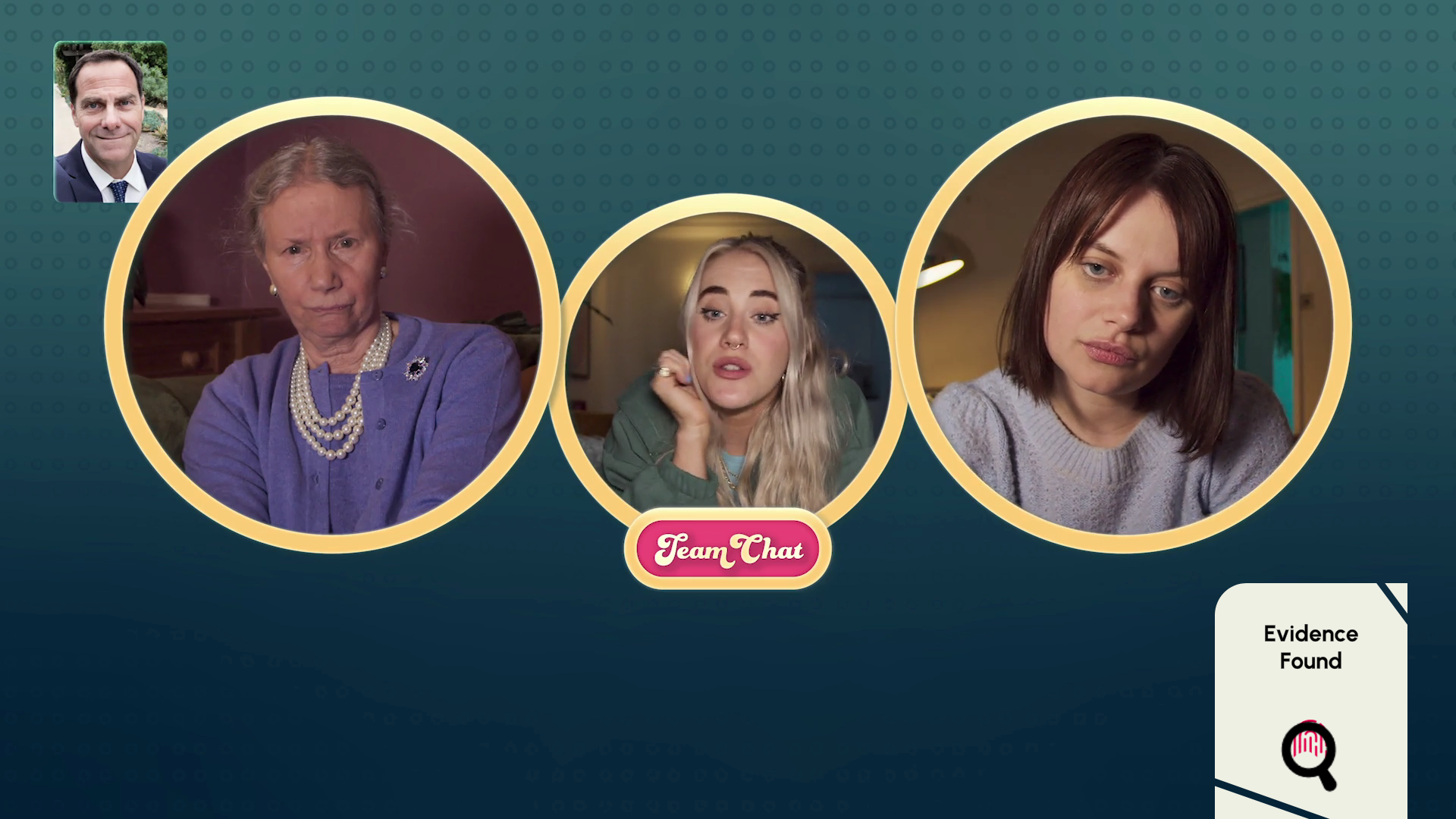 Oddly enough, I think pointing the finger at the wrong person is almost better than getting the right person. Their reactions are priceless, and reveal more about them than any of the conversations happening during the game. For example, one cousin isn’t who he appears to be and we learn about it in a most dramatic/hilarious fashion. Other than the whodunnit aspect, the most fun part of the game is the family dynamic. Are they dysfunctional? Absolutely. Would I want them as my family? No. But it is fun to watch unfold? Absolutely. None of them have any respect for each other and it’s just dig after dig after dig. I don’t like any of them. I’m not even that fond of the more “normal” ones (Marcus and Abby) entirely because I don’t trust that they could legitimately come out of this family being level-headed.

Some of the actors will be familiar to FMV fans: Al Weaver (Toby) was in The Complex as a main character (Rees), and Georgia Small (Lottie) was in Five Dates and Bloodshore. Other actors will be recognizable from their past roles in television: Andy Buckley (Uncle Marcus) is known for roles in The Office (US) and Shameless (US, as part of one of the better storylines it ever had), Abigail Hardingham (Abby) was in 2018’s 12 Monkeys, Robbie Kay (Bradley) was in Once Upon a Time for five years as Peter Pan, and Eileen Davies (Nan) was on Coronation Street starting for a little while (this is the most important one, because Coronation Street is the greatest show on television and nobody can convince me otherwise). Basically, if I hadn’t been interested in the game’s genre and premise, the cast would have sucked me right in. The acting is perfectly over the top yet somehow completely believable that this is how this family would behave during an online family game night.

Who Pressed Mute on Uncle Marcus? is a shining example of everything I love about FMV murder mystery games: the intrigue, the interpersonal relationships, and the quest for the truth. I especially like that no matter how often you fail there will always be another chance to uncover the truth, and without penalty. In fact, “failing” and pointing the finger incorrectly is especially interesting because that’s when true colours really shine. I have such high expectations from Good Gate Media and Wales Interactive that I keep expecting one of the game to be a flop, but alas, this was not!

And today’s eShop nasty is… Beach Girls: Don’t Lie In…