Handhelds have always been a key way that people have played their games. Even before the original Game Boy there were Game & Watch devices. There is something enduring appealing about being able to play a game from anywhere, and have a private gaming experience no matter where you are. So, this week for our poll we put it to people: what has been the best handheld of all time? 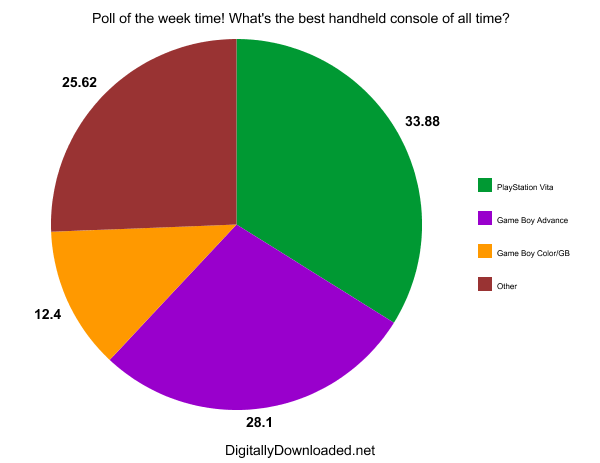 Unfortunately, because the poll only allows for four responses, I needed to make some concessions with this one. There have been a lot of great handhelds released over the years. What I’ve done here is pick consoles from three major moments in handheld gaming to focus on. The PlayStation Vita represents the moment that handhelds could offer a genuinely equivalent experience to the home consoles (paired down, yes, but the Vita could do everything that TV consoles could). The GBA was the transition point between handheld games as primitive experiences (as the Game Boy was), and the point that handheld consoles could be considered “uncompromised” as gaming experiences.

And of course the Game Boy and Game Boy Color are deeply nostalgic devices that got a lot of people into gaming and are fondly remembered for that.

Despite my best efforts to capture the three handhelds that I had assumed would be most fondly regarded, 28.1 per cent of respondents chose “other”, and the range of consoles cited there were fascinating. Everything from the DS and 3DS right through to more niche consoles like the Game Gear, Neo Geo Pocket and even the Wonderswan (note: if you speek Japanese the Wonderswan is very much worth it). Interestingly, however, no one mentioned the PSP, highlighting just how completely the Vita replaced that console in the consumer’s mindset.
The Nintendo Switch also got a few mentions, but only a few, perhaps reflecting that most people see it as a “hybrid” rather than handheld, and that it’s still new and current so perhaps a touch early to be giving it GOAT status.
Of the three options that were in the poll, the Vita swept into first with a third (33.88 per cent) of the votes. It really was a beloved console within the narrow reach of the DDNet audience. The GBA still got a quarter (25.62 per cent) of votes itself, highlighting just how compelling that console was. It introduced us in the English speaking world to Fire Emblem. Fire Emblem!
Finally, 12.4 per cent of people are old enough to remember the joy of whipping out the Game Boy for some Pokémon Blue Link Cable trading (or have fond memories of when Mario Tennis was actually worth playing).