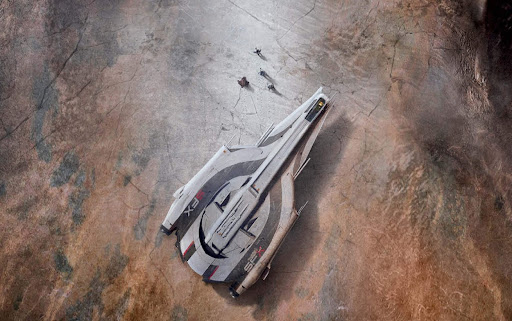 Did you know that it’s N7 Day? No? Yeah, me neither. I had no idea that EA had arbitrarily declared that there would be a day for the Mass Effect series until I saw people writing articles about it, giving the EA PR team a win to meet their month’s KPIs. And, yes, I realise that I’m not helping here, but I do have a point that I assume won’t amuse EA’s minders as much.

See as part of their ridiculous idea of a “holiday,” EA teased a new Mass Effect. One that would seem to imply that it’s a continuation of the Mass Effect series from the first trilogy and not an attempt to turn around the horrible reputation that Andromeda picked up. Or it could be an Andromeda thing. Either way, I’m stuff bugged by this.

Because here’s the question: why? Or perhaps that’s the wrong question. After all, we do know why. It’s because EA sees the opportunity to make money from it. That’s the one and only why here. So perhaps the question that we should be asking instead is what is the creative mandate here?

Let’s say that this Mass Effect is to take place in our galaxy again (I’m going to call it “Mass Effect 4” as in this scenario EA would be wise to just forget about Andromeda completely). What could possibly happen to raise the stakes further over that original trilogy? Shepard and her team of allies already dealt with an existential threat that the entire galaxy faced. The existential threat. Any story that they set in this universe would be doomed to one of two alternatives: either it would lack for the same galaxy-shattering impact of the first trilogy (no good when you’re selling the blockbuster experience), it would be trying too hard to one-up the galaxy-shattering impact of the first (which would be nonsense). Either way, that original Mass Effect trillogy was so fundamentally perfect that people have come to peace with it being the complete package. Sure, they may tag EA into the occasional social media post asking for a sequel, but no one would argue that that trilogy was incomplete.

So let’s say instead that this Mass Effect is some effort to revitalise Andromeda. That’s an even more odd one. Very few people have an attachment to Andromeda. Why not start a fresh science fiction series in that case, and free the team to be creative with their ideas, rather than burdened with addressing what has come before? (Let’s also pretend Anthem isn’t a good argument for BioWare never creating a “new IP” ever again).

The point is, either way, and no matter what EA and BioWare do with Mass Effect, they’re going to be up against player expectations and/or the reputation on the series – both the legendary (that original trilogy), and the precise opposite (Andromeda). And for what? For the outside chance that lightning strikes twice and we get a second all-time great piece of art? With a different creative team, the chances of that, while working with something so powerfully narrative-driven as Mass Effect, is remote.

So, again, why do this? Aside from the money, I mean. And to broaden the question, why is it always the games industry where we have to answer this question? Stanley Kubrick never needed to make endless sequels. Shakespeare very rarely did. By not making sequels, artists in other fields can explore more creative ideas, more often. Shouldn’t we want that in video games too?

Chalk this up as my latest example of how the high-profile end of the games industry often behaves unlike the art form it’s meant to be. Games don’t have to be sequelled into perpetuity. Sometimes, just sometimes, having a story that ends is the satisfying conclusion. BioWare themselves proved that already; Baldur’s Gate 1 and 2 were masterpieces. Then, rather than make a game inspired by Baldur’s Gate, another studio decided to just make Baldur’s Gate 3, and my love for the entire series was trimmed down just that little.

That’s not to say sequels can’t exist. It’s about knowing either when to end them or, if you’re going to push on and keep making them, find other ways to at least keep the creative teams at the studio fresh and… well, creative. I have something like 15 Atelier games on my Switch alone, so it would be hypocritical to say that sequels shouldn’t exist. But look at what Gust does when it’s not producing sequels: it made Blue Reflection. It made Nights of Azure. Look at Bandai Namco – yes, sure, Bandai makes a lot of Tales games, but then it also produced Scarlet Nexus this year. Square Enix has its Final Fantasy and Dragon Quest mainstays. It also dropped Dungeon Explores on us out of nowhere, to our great joy. If you’re going to continue to make the sequels, these smaller and/or different projects allow both the development teams and the players to at least experience some different things.

But the big publishers in the west are focused on making fewer games, and making those games bigger and having them sit on the market longer. The things that Activision, Ubisoft and EA are shedding to enable this are the creative, different games. And they are all becoming exhausting. I am one of the biggest fans of both Mass Effect and Assassin’s Creed out there. I have absolutely no interest in whatever comes next from both series, as you can almost see the creative energy seeping out and drifting into the ether from these companies.

Finally, and perhaps worst of all, doing this undermines the legacy of the original great works. Mass Effect was perfect until Andromeda. Wouldn’t it have been better if it remained perfect?

Poll of the week: What’s the best handheld console of all time?