My Powkiddy X18S arrived today. Touted as the first in the “new generation” of handheld emulation consoles out of China, the device’s more powerful chipset means that consoles that previous devices struggled with (think N64, Dreamcast, PSP and DS) are now within reach. On first impressions the console does indeed run most of the more demanding titles for these devices, and that alone makes me happy, but there are caveats that will make most people want to pause.

Firstly, and most importantly, the build quality absolutely sucks. There is absolutely no resistance in the control sticks, which means that making more precise movements with them is difficult. The face buttons are soft with no spring (which I actually like for use in RPGs and other slow-paced games, but most people do not, and it makes fighting games a pointless exercise). Most egregious of all, though, are the shoulder buttons, which are far too resistant and uncomfortable to press down, and two of them are so tiny that they are genuinely unplayable in just about any context. You should never go into an emulation device expecting the build quality of a Sony, Nintendo or Microsoft device, but where rival manufacturer, Anbernic, aims high and gets close with its devices, this one is almost desperate to remind you that it really is an unofficial console from China, and given that it’s not that much cheaper than current consoles on the market, this is a problem.

With that being said, there’s a lot to like about the device, too. It is a heavy (but comfortable) and large console, about the width of the Nintendo Switch. Running on Android, it has a decent touch screen implemented, and decent WiFi connectivity, meaning that cloud services, Android apps, and other such things can be installed on it. The screen’s just the right size to make bedtime Netflix a thing, for example, and you can even play Game Pass and Stadia through it, if you can wrestle with what the less-than-ideal control inputs do play those games. That functionality is hard to ignore, and the clamshell factor is gorgeous and screen-protecting, meaning that I’m actually more likely to take this thing on train trips and flights in the future than my Nintendo Switch.

It’s also worth noting that while the buttons do indeed suck, there are two little features of the Powkiddy X18S that put that in another context – it has HDMI via an HDMI mini connection AND it has BlueTooth, so you can always pair a wireless controller up and just play the thing on your TV. And, potentially, stream. I’ll need to look into streaming some of the more obscure N64 and PSP games, I think… 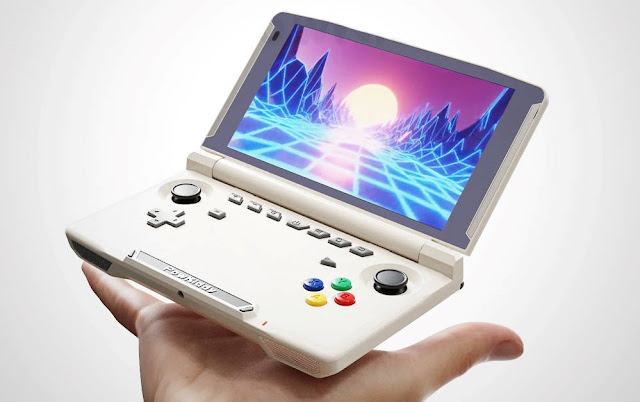 As with any emulation console, you’re going to have to go through a lengthy and deeply unintuitive setup process to start playing. The biggest issue that the X18S has is that you’re going to want to put your games on an SD card so that you have something to play… but the most common emulation platform that people use to play games via Android, RetroArch, won’t recognise the SD card when it’s placed in the device. Cue a long and arduous journey to try and get that working. In the end Robert, my good friend from Tech-Gaming, was kind enough to help me get set up the various individual emulators that I needed to instead. It took a couple of hours, but once you have got the right emulators installed and reading games off the SD card, the Powkiddy X18S won’t need much further setup. Make sure you do factor the cost of a big micro-SD card into your budget for the device, though, because while older emulation consoles didn’t need much storage (the entire Game Boy library of all games ever made only takes up around 200MB, for example), once you’re talking about N64, PSP and Dreamcast, you’re looking at very big file sizes, and as with all emulation devices, you don’t want to be pulling the SD card in and out of the X18S too often to move data around.

Because the device does have a touch screen, and because the screen of the X18S is large enough, DS games work on an emulator console for the first time, with the screen being split into two “halves”. You probably don’t want to be doing something too fiddly for the touch screen side of the action, but there are a wealth of games that were previously painful to deal with (because they displayed information on both screens and/or required the use of a touch screen) that previous emulation consoles could only emulate really poorly. Meanwhile, the screen is large enough that PSP games can be upscaled, and only the most demanding of demanding among them will suffer any kind of resolution drop in doing so. This device is the best console for PSP games to date.

However, it will be the N64 games where I get the most value out of this. We’re not likely to see Ogre Battle 64, Body Harvest, or Aidyn Chronicles on the Nintendo Online service any time soon. Furthermore, some of my favourite sports games of all time – Wayne Gretzky’s Hockey or NBA Hangtime, for example – are unsalvagably out of license. The X18S has been the first time I’ve been able to relieve any of these games to any great reliability, and while I will prefer to play N64 on the Switch wherever I can, for those that I can’t, the N64 is probably the console I get most nostalgic over, and the X18S is a gift from that perspective.

If you can wait, there will be a wave of devices coming that will do a better job of emulating the consoles that the Powkiddy X18S does best. Anbernic, eventually, will have one of its own, and you can be sure that that device will turn some heads when it lands. Even after that happens, though, I think I’ll still use the X18S a lot. It’s a highly portable device, and the clamshell factor is immensely appealing for people who, like me, have absolutely no tolerance for scratched screens. The X18S could have been something more, but on balance I’m also not going to be disappointed with purchasing this. Not by any means.