It is the season for horror, after all, so, with Halloween looming, and so many horror games being released right now, we thought we’d put the question to our audience: Of the classic Japanese horror franchises, three in particular reign supreme. So, what is your favourite? 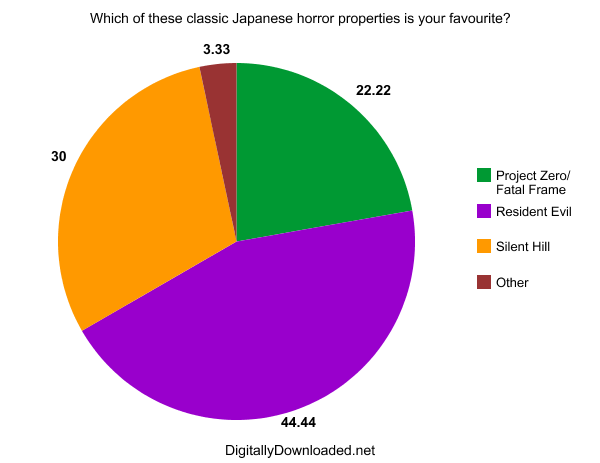 I don’t think that there’s anything about this poll result that’s particular surprising; the three classic properties are fairly evenly split, and only of them got more than 1/3rd of the vote from horror fans. That game was, of course, Resident Evil, which has always been the most prominent of all Japanese horror properties. The B-grade aesthetics and sensibilities draw people in who aren’t usually fans of the genre, and for many of us, it was our first experience with the horror genre in games. It’s also the series that is still going the strongest of the three today, which probably helps its relative popularity.

Second was Silent Hill, with a clean 30 per cent of the vote. This also isn’t surprising. Silent Hill is rightfully celebrated for the masterpieces in the series (particularly Silent Hill 2 and 3), and those games are regarded so highly for their deep, complex narratives and intellect. However, the series has also had some real duds, and many people found the games too difficult to play, even if they enjoyed the thought behind them.
Third was Project Zero or Fatal Frame (for Americans) with 22.22 of the vote. Project Zero has always been about beautiful people (mostly women) and ghost stories that are as tragic as they are angry and violent. This lends the series a “beautiful melancholic” atmosphere, which is compelling for a lot of people. It’s also the truest to Japanese ghost storytelling tradition of the three, and has plenty of fans for that reason too. But many of the games have had tiny releases (some not being localised at all, and others skipping America entirely), so of the “big three” it has been the most difficult to discover.
As far as “other” goes, it was only a tiny handful of people, which goes to show just how dominant these three properties have been in the Japanese horror space over the years. However, Siren did get a few nods (Sony, please bring this series back), and then there was one or two for Clock Tower (and the spiritual sequel, Haunting Ground), showing that a few people have the finest taste of all.