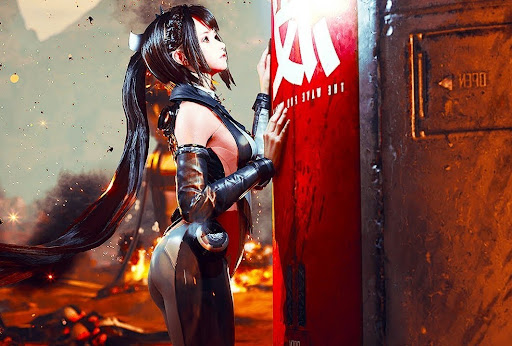 Remember when Sony developed games like Gravity Rush and Tokyo Jungle, and published wildly creative thought bubbles like Oreshika and The Unfinished Swan? Taking a quick glance through the PlayStation Showcase (which I thankfully didn’t stay up to watch) shows that those days are long gone. Gotta keep making the same big blockbusters and all that… but at least there was one game in the showcase that looked like it had potential.

Korean developer, SHIFT-UP, has a new action game in development called Project EVE, which looks like it will be a PlayStation 5 exclusive (though it doesn’t have any firm release details yet). The game has some interesting-sounding features to go with its action focus, as described by the director, Kim Hyung Tae:

In the not-too-distant future, mankind is expelled from Earth after losing the battle against the invaders called the NA:tives. To win back Earth, the player becomes Eve, the survivor of the paratrooper squad deployed from the Colony, who must fight through powerful enemies with new comrades. We invite you to join Eve’s adventure in the face of unknown creatures on a desolate, destroyed Earth.

The Earth, embodied with such graceful graphics that take full advantage of PlayStation 5’s power, will convey unprecedented vibes that stand out from other post-apocalyptic worlds. As you accompany Eve throughout the game, you get one step closer to the secret hidden in this unusual world. Combat in Eve is deliberate—including attack, defense, and evasion—while remaining fluid and zestful. The only way to survive is to grasp the attack patterns of various enemies and counter with precise timing.

Continue the flow of battle after parrying and evading by weaving in multiple combo skills. Taking down enemies culminates in a spectacular and amusing display of power. The DualSense wireless controller’s haptic feedback amplifies this experience by manyfold. From the sensation of the blade slicing into the enemy to the exceptional skills that tingle your hands. We can’t wait to reveal new weapons that vividly showcase the DualSense controller’s features in the future.

The trailer shows quite a lot of promise, too. This is one we’ll have our eyes on.