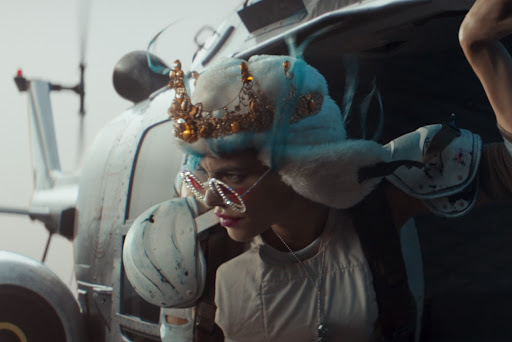 One of the biggest things to come from Sony’s big day of announcements today was, apparently, an advertisement. I wish I was joking, but of course, capitalism and such, so I’m not. There was a press release about it and everything, as though it was something newsworthy that we writers should be passing off as exciting news via our channels. “New Global Ad Debuts,” the headline of that press release writes. Sony has released an advertisement. Get excited because you’re being marketed to.

The advertisement is very much an advertisement. It’s a hollow, empty shell of content that sure makes Sony seem big and wealthy and powerful and impressive, but there’s no substance nor thought behind it. It no doubt cost a fortune to make and will make the fans feel warm and fuzzy about how blockbuster Sony is, but it doesn’t mean anything. Hell, there’s not even anything about a game in this particular advertisement. People were joking on social media about how the chess metaphor in this ad was more interesting than half the stuff in the State of Play show, and I’m inclined to agree. I very much would like a new Battle Chess game with these kinds of visuals.

“This powerful new spot ignites the feeling of exhilaration that comes with PlayStation’s unapparelled gameplay experiences”, the media statement reads. Now, I admit that I do love the typo there. It was meant to be “unparalleled”, I’m sure, but then again perhaps they did mean PlayStation’s naked gameplay experiences. The rest of it, though… no. Sony. Just no. This is not what you pitch to any media (aside from marketing/advertising industry press, I guess). An advertisement is never “powerful.” It’s never going to “ignite” anything other than my desire to start ranting about capitalism. An advertisement is not there for the media to push for you for free. You’re meant to pay us to run this stuff on our websites. An advertisement is there to sell stuff and nothing more. It’s not a piece of art, and while I know the blockbuster end of the video game industry really struggles to understand that marketing collateral and art are different things, they really are different things.


The thing is though, I’m not sure any of this is even good advertising. Good advertising, to me, does still have an informational component. It should tell you something about the product that it’s trying to get you to buy. An advertisement for a game should have something about the game in there. An advertisement for a console that plays games shouldn’t confuse people about whether what they’re watching is some kind of unannounced game, or if it’s just junk.

I genuinely find this advertisement here deeply, weirdly confusing. If it wasn’t for New Order’s Blue Monday playing in the background (the best song of all time), I would have turned it off. It’s not a two-minute film, as Sony apparently wants us to see it (as press statement goes “The film tells the story of two rival Kings, who battle in through an epic game and follows the progress of a Pawn, the most unassuming piece on the board, as she makes her way through the city. On her way she encounters different challenges posed by the opposition, but ultimately makes her way to the rival King’s penthouse to win the game for her team”). It also doesn’t tell me anything about PlayStation, other than that they spend stupid amounts of money on indulgences. Sony could have funded the development of Tokyo Jungle 2 with the budget this “film” likely had.

Remember Tokyo Jungle? What a game that was.

But I digress. Perhaps the goal here was aspirational. A “buy a PlayStation and live the dream” kind of messaging. It’s quite possible that I’m just that jaded and cynical these days that I’m immune to this kind of marketing nonsense. Or perhaps I’m just old-fashioned because I’d rather get excited about games I’ll actually play. But even then, even if this “film” represents a visionary future of advertising that will appeal to the young ‘uns in a way that millennial me is too old to appreciate, it’s not news, Sony. It’s an advertisement.

This late-stage capitalism nightmare really is ruining the games industry, when we’re expected to see being marketed to – unapparelled marketing, as it were – as news.

But then again, I did just post the advertisement here, so Sony got me. You win yet another round, Jim Ryan. If you’ll excuse me, I’m off to research same-day alcohol delivery.