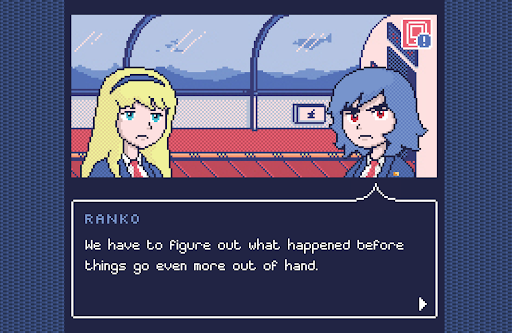 I can’t tell you the last time I sat down and played a straight-up, old-school visual novel. I’ve gotten used to visual novels with branching narratives, or that include point-and-click components. The Mysteries of Ranko Togawa: Murder on the Marine Express promises to be that classic experience. While it delivers in gameplay, does it deliver where it really matters – the narrative?

An all-girls preparatory school has been chosen as passengers on the maiden voyage of an underwater submarine that connects the American west coast to Japan. The train is in a glass tunnel, but also completely waterproof in case there’s an issue with the tunnel (this matters to me, I don’t know why). Let’s be real, the ocean is far too deep for this to even be possible, but I’ll go with it anyway. There’s a good chance that the school wasn’t selected so much as some of the students’ parents pulled some strings, but what matters is that the students of St. Joachim are now speeding underwater between the eastern and western worlds. The trip offers fantastic views of marine life, thematic activities, and luxurious food.

Of course, it can’t go smoothly; after all, the word “murder” is right there in the game’s title! Halfway through the first day, disaster strikes as a favourite teacher named Mr. Sheppard has been murdered. Yes, a bunch of teenage girls are stuck on an underwater train for multiple days with a killer, just what everyone wishes for! But who would murder someone so beloved? And will anyone else fall to the hands of the killer? As much as I’d love to speak details, I’m not about to ruin it for anyone – sorry. I will, however, say that everything was pretty predictable and at no Aha! moment was I legitimately surprised by the truth.


The protagonist is, unsurprisingly, Ranko; she is often found with her best friend who pees a lot (Astrid) in tow. I say this because that’s what Ranko says. She’s rude, unlikable, snippy, and more often than not flat-out mean. Every now and then there are glimpses of a softer Ranko, such as when she’s nervous to see the crime scene even after the body has been removed, but mostly she’s a certifiable cruel girl who doesn’t actually experience any growth as the story progresses. I grew up with a best friend like that. You know what we call her now? A bully who picked herself up by putting myself down. She destroyed five-year-old Lindsay’s self-worth within weeks, and I still struggle with having the confidence to speak up at times. I feel so terribly for Astrid, and I feel so much hatred for Ranko. I don’t have an issue with not liking a protagonist, but I do have an issue with the lack of growth. If the main character doesn’t experience growth, we’ve got a problem. Otherwise, what’s the point? At one point she seems to learn, but two seconds later she’s back to being cruel to the very person supposed to be her best friend.

Ranko’s classmates and teachers are all one-note. Even if someone is hiding a secret, it doesn’t actually seem to affect them past the words that leave their mouths, words that all fall flat and emotionless. There are quick glimpses of real people, but in the end it’s all covered up by having them literally preaching life lessons to the player. It’s actually quite annoying, to the point I’m finding myself more upset with the game while writing about it. Granted, affect and emotion are hard to portray via a visual novel, but it’s definitely possible.

Of course, we have some typical villains, the wildcats. They’re supposed to be mean girls but Ranko is far, far more demeaning to anyone she comes in contact with, so the wildcats almost seem pointless. Named Catherine, Mao, and Katya, the wildcats actually experience more growth than anyone else. 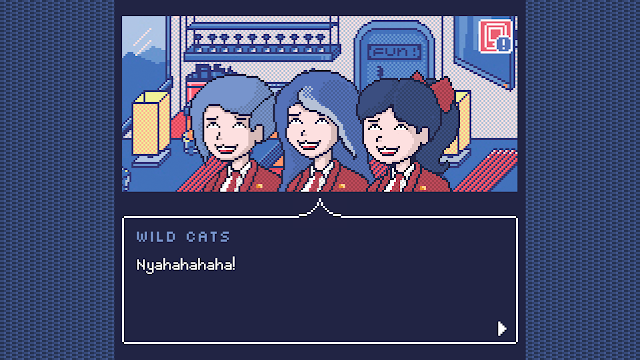 The entire time I’m playing, there’s a nagging thought at the back of my head: why the hell are the teachers and train staff allowing two students to investigate a murder? Why isn’t everyone immediately locked in their rooms? Why are students allowed to interrogate authority figures? I can understand going behind their back, but Ranko and Astrid don’t even try to be subtle. Where are the adults and why are they not adulting?!

The single other gameplay element is the phone. It’s mostly used to save, although it’s never made clear that’s where saving should take place (saving is hidden under settings) so it was kind of a crapshoot there. The phone includes Marinet Chat, an app where students can talk with each other. But there is an excessive amount of unrelated chatter that’s driving me mad so I stopped checking at some point. There’s also a gallery so you can change the phone background, which is also the main screen background: mine is kitties! 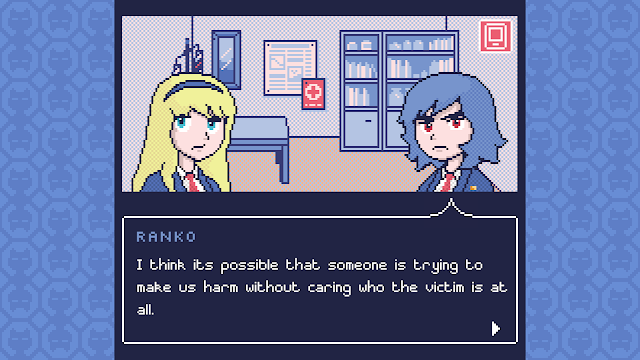 There are a few things about the game that make me want to correct what is being said. Sometimes the students refer to Mr. Sheppard as “Teacher” and I honestly couldn’t tell if that’s a placeholder for his real name or actually what they refer to him as until it later becomes obvious it’s just a nickname (it isn’t seen in reference to any other teacher). Sometimes the English feels a bit broken (“Hey! We are hearing you!” when it should be “Hey! We can hear you!”) but that’s nothing a good editor couldn’t fix. My two biggest beefs involve how they talk of suicide, and how they reference serial killers. First, suicide. It used to be illegal for someone to kill themselves, thus the term “commit suicide.” This is basically an antiquated term that doesn’t appropriately describe the actions of someone who dies at their own hand; “died by suicide” is far preferred. Second, serial killers. To qualify, one has to kill three or more people, but long before that Ranko is going around shouting about a serial killer. There is no serial killer. At no point can the killer actually be described as “serial.” I suppose I can chalk that up to kids exaggerating, though.

My original mental conclusion to The Mysteries of Ranko Togawa: Murder on the Marine Express was that it was perfectly average. But honestly, after reading my notes I disagree with myself: it’s actually kind of subpar. No character growth and a predicable (mystery!) story make for a rather bland experience. I mean, it was okay, I guess, but that’s the closest to a superlative I can use to describe the game. It’s a good thing it only took me just under three hours to play, or I’d have given up at that point regardless of completing the game or not. It’s the first in a series, and only time will tell if things will look up from here.