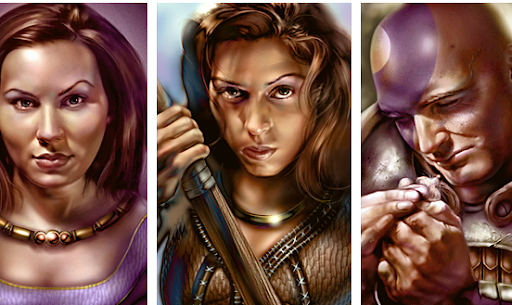 Nonetheless, I do like that Baldur’s Gate is so open and flexible, because I will play it in different ways. Sometimes I’ll miss the optional bits that can be missed on the way to the game’s conclusion. Sometimes I’ll try and explore every nook and cranny. Sometimes I’ll do some of the optional side quests, and at other times I won’t. Part of the enduring appeal of Baldur’s Gate, and why I am still playing it two decades later, is undoubtedly that even when I’m playing with the same party, I’m going to give myself a different experience. 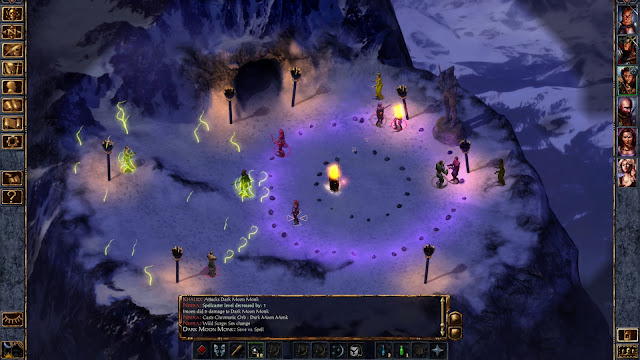 Another, much more simple reason that I continue to play Baldur’s Gate is nostalgia. And here’s the thing about Baldur’s Gate that has always fascinated me; I don’t necessarily know where that nostalgia comes from. Baldur’s Gate was not the first game to give me an “open world” RPG with an open-ended quest structure; four years before BioWare’s Baldur’s Gate, SSI released another Dungeons & Dragons game, Wake of the Ravager, which also had consequence-based narrative trees. For one brilliant example in that game, after your group allies with an underground society, their secret base gets attacked by the forces of evil that run the city that the game takes place in. If you retreat from that battle, on returning to the secret base, all the resistance fighters have been turned into undead. If you succeed in driving off the evil, then everyone that you save remains alive and will continue to help you, utterly changing the complexion of the rest of your adventure.

So Baldur’s Gate, four years later, certainly wasn’t doing anything new (despite often being credited with it). It doesn’t even have a setting that is that interesting. Baldur’s Gate takes place in the Forgotten Realms Dungeons & Dragons setting, which is generic Tolkienesque fantasy. Wake of the Ravager, meanwhile, takes place in the Dark Sun setting, a brilliantly fascinating Mad Max-with-magic location that was as brutal as it was vivid. And yet, while I do still own Wake of the Ravager thanks to GOG, the game that I find myself playing on an annual basis is, nonetheless, Baldur’s Gate.

Part of continues to make it interesting is certainly its size. Wake of the Ravager was largely confined to a single city and various satellite dungeons. Baldur’s Gate was a massive, expansive map with three major settlements, a host of wilderness regions, plenty of dungeons, and so much of it was completely optional, meaning that so much of it was about finding your own way around the world, and that came with some major emergent storytelling opportunities. It genuinely felt like you were sitting at a tabletop, listening to a DM’s description of events, and guiding your party in response. To this day Baldur’s Gate feels expansive, and in many ways the openness was a core mechanic of the game in a way that modern open world games only have the most shallow grasp on. Most modern open world experiences feature a single major narrative and then a whole lot of irrelevant map icon-chasing busywork for arbitrary loot. In Baldur’s Gate, everything you did had some kind of narrative intent behind it. 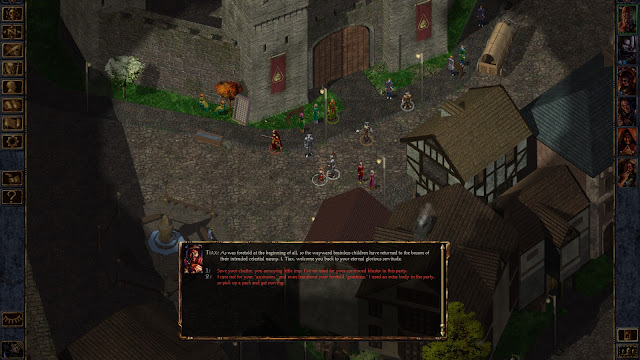 Finally – and I think this is why I have always stuck to the same character mix in Baldur’s Gate – this is a game that allows you to care about the characters. It sounds silly given that they’re a mess of barely-defined pixels to look at now, but the writing for each character was so perfectly ambiguous that it gave you a strong sense of who those characters are, while also letting you take ownership of them. Minsc had his miniature giant space hamster pet, but was his attachment to Boo because he was a simpleton, or was it his sense of humour, coupled with an empathetic softness of the soul? Was Imoen really the “little sister” (but actually the same age) type, or was she the character your MC got good and R-rated with off-screen? Was Xan Dr. House: the wizard or was he Dr. House the wizard? I’ve had genuinely different readings on each of these characters every time that I’ve played, and that’s not easy to write. Too vague and characters are empty husks. Too specific and the player loses control. Baldur’s Gate is almost unique in just how perfectly it hit the right notes.

And so I have rushed out to purchase Baldur’s Gate every time it has been re-released. When it was remastered by Beamdog I was over the moon (especially since they added even more characters – which I’ll never use – to the game and even more quests). I have ended up with it on PC, iPad, PlayStation and Nintendo Switch, and I hope it continues to be preserved like this, because I’m not even close to done with this game.

And perhaps, one day, I’ll break the cycle of Imoen, Minsc, Dynaheir, Xan, Garrick. But probably not.

Review: The Mysteries of Ranko Togawa: Murder on the Marine Express (PC)