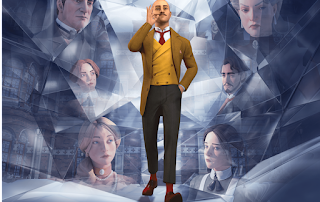 After Sherlock Holmes, Agatha Christie’s Hercule Poirot is surely the most well-known, celebrated detective of all. He’s appeared in a fair few of his own games too, though nothing that has truly hit the high points of the detective story in video games. This new one: Agatha Christie – Hercule Poirot: The First Cases does look good, though.

Related reading: Our review of The ABC Murders – the Poirot adventure already available on Nintendo Switch.

It will be developed by Blazing Griffin, and published by Microids, in collaboration with the estate of Agatha Christie herself. The game will launch on September 28 on PC (via Steam), Xbox One, PlayStation 4/5, Xbox Series One/X/S and Nintendo Switch.

As the title suggests, this game takes place when Poirot was young (though, no doubt, as eccentric as ever). It looks like the game will follow some of the features of previous Poirot games (including the mind-map), and will take place in an exotic, luxurious house “filled with buried mysteries.” Best of all, though, this one will be an untold story, so Poirot fans will be able to experience something new with their favourite hero.


Not long to wait for this one – it’s releasing right in the busy part of the year, but we don’t get all that many true detective games, so hopefully this one resonates.

Nintendo’s going hardcore niche for the next Switch Online update