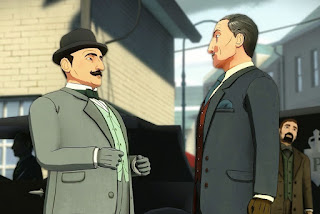 It would be a big stretch to suggest that Agatha Christie’s The ABC Murders is a classic of the point-and-click genre. It has its fans, but it’s niche enough to be one of the stranger ports that we’ve seen to Nintendo Switch. The original game is readily available on just about every modern platform, and I just can’t imagine that there was anyone clamouring for it to be on Nintendo Switch as well. Then again, there are surely other people like me who missed it previously, so perhaps the publisher was looking to lock down the demographic of “Agatha Christie fans who either don’t own any other gaming devices or did, and basically forgot that this game exists.”

I’m not sure that’s a big demographic, but putting that aside, I really am a big Agatha Christie fan. There’s something so utterly compelling about her work. She presents what seem like simple whodunnits involving impossible crimes, but Christie’s skill was in the way that she would dream up solutions that were entirely plausible without relying on an evil monkey to do the deed (please don’t smite me, Edgar Allan Poe fans, I do like him in his own way too). Hercule Poirot – one of Christie’s two heroes – is a bit of a joke today, as seen by the increasingly “eccentric” manner that we see him played in television and film, but in Christie’s fiction he’s an immediately likeable and quirky fellow to go with his complete genius, and even when you already know the end to any of Christie’s Poirot novels, you also can’t help but get wrapped up in the fantasy on each re-read thanks to how personable Poirot is, and how he manages to unravel the complex-but-actually-simple crimes in the end.

The ABC Murders is one of Christie’s books, and the developer has worked very, very hard to capture its spirit and aesthetics in this game. It’s a simple-looking experience, to be sure, but not unpleasantly so. I suspect people who grew up with classic point-and-click adventure titles will feel particularly partial to it, because the game is as much a homage to those experiences as it is to Christie’s work itself. This can be maddening, as you scour every square inch of a screen for that one damned clue that just doesn’t look like it can be there. At the same time, the sense of reward for actually completing a puzzle or solving a mystery is strong with this game, as the puzzles are often quite challenging, and delight in demanding that the player figure them out for themselves.


On a rare occasion, the puzzle design doesn’t work anywhere near as well as it should. If you watch the stream I did of the first hour or so of the game (above), you’ll see me get stuck with a sliding puzzle that wasn’t letting me slide pieces to the position I wanted them, and wasn’t necessarily good with the feedback on why it wasn’t letting me do that. On the other hand, there was a later moment in the same stream where I needed to figure out what a bunch of bird icons were, and that one did feel great to puzzle through without any guidance. For that moment it was like I was using the real detective’s logic there.

But that brings me to my biggest issue with The ABC Murders; there is a thematic disconnect built-in by virtue of the character that you’re playing. Poirot is beyond genuis, and while I was making a fool of myself in the stream making silly mistakes with relatively simple puzzles (they do get more complex), one feeling I could never shake is that the actual Poirot would have no such trouble. I have no idea how developers would be able to resolve this, but it’s a problem consistent across Sherlock Holmes games too. The “hero fantasy” that these experiences aim to provide is to put you in the shoes of a genius intellect with puzzle-solving capabilities well beyond what a standard person could achieve. Most people have much more modest puzzle-solving abilities – they’re the Watson instead, if you will, and, importantly, most of us know it, too. Right off the bat, it makes the suspension of disbelief hard. At the start of last year, I reviewed another detective game called The Raven: Remastered (also available on Nintendo Switch), and in that one you play as a merely adequate cop and semi-pro detective. That character felt far better pitched in terms of the player’s own feasible capabilities. Certainly, it wasn’t the weird disconnect of Poirot getting stuck with a rotating puzzle box, as I did to him.

In general, I do find myself wondering if developers should engage with these characters at all. I’ll explain via a comparison: Take Aragon from Lord of the Rings. Within the realm of video games, it’s relatively easy to simulate the fact that Aragon is a martial hero that can slaughter his way through hordes of orcs; there are a lot of games that have him doing just that. To achieve that all you need is a suitably visceral action combat system. But playing as a great detective poses a far greater conundrum; do you make puzzles that would challenge a great detective and potentially leave the game impossible to actually play for most, or do you pitch the puzzles at a point that the character doesn’t really feel like a true adaptation? Either way, I do think that developers are better off with a “new” character like Level-5’s Professor Layton, whereby the puzzles are, by default, pitched at the point that Layton’s in-narrative character can complete. 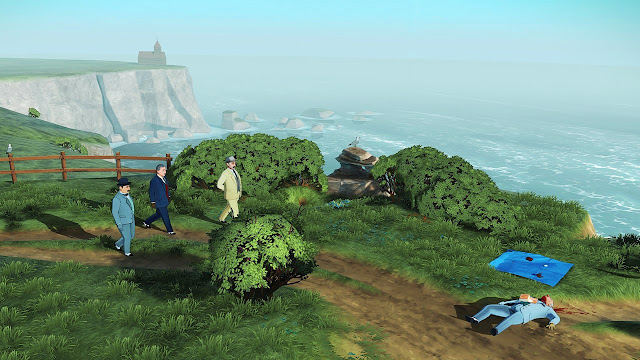 All of that is a bit of a digression, but it speaks to my main issue with The ABC Murders; it’s all quite nicely presented but feels a little hollow as a Christie/Poirot experience. It doesn’t help that puzzles have been thrown in arbitrarily to get their number up (and the play time extended). I did like how the in-game rewards system is tied to “thinking and behaving like Poirot”, though, and that includes moments which are in there simply for character building, like Poirot’s many vanity moments. It’s the closest this game gets to becoming the real, authentic Poirot adventure that I was looking for, though those moments are a little too infrequent for their own good.

Ultimately, Agatha Christie’s The ABC Murders is a perfectly competent point-and-click detective game, competently ported to Nintendo Switch. It’s more difficult to deliver a “great detective” story in a way that feels appropriate to the character and the players than most people would think, but the developers have done an admirable job here overall. Just do yourself a favour and resist looking up a guide. Not all the puzzles are perfectly executed, but for this game to have the right impact on you, you really do want to be solving each puzzle without assistance, even if that does mean that you feel like your Poirot’s IQ has dropped a couple hundred points.