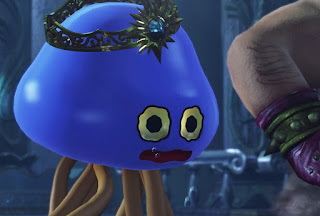 Square Enix announced a bevvy of new Dragon Quest remakes and new projects today. Most of them are good, exciting announcements, suggesting that the series might be hitting a new purple patch. Rather than summarise them all, I’ll just link you to the various Gematsu stories, since they already have it all covered:

Most of this looks pretty good (though the jury is out about how much of it will be localised for the west). It’s the last – and biggest – announcement that really caught my eye, though. Dragon Quest XII, as the next proper game in the venerable series, is, of course, a massive announcement. That it’s going to be a “dark, mature game”, is big news for all the wrong reasons.


I’ll be blunt here: Dragon Quest going “edgy” is a blatant, desperate, effort by Square Enix to appeal to the western market. Over in Japan, the entire culture is wildly familiar with bright, cute things being also thematically “mature” and “dark”. The Dragon Quest series itself often canvasses themes that are incredibly mature, even if that maturity is marginally painted over by big-grinning slimes and puff-puff humour. It’s over here in the west where the literal rules supreme and things are only mature when they are like, totally grim, bro.  Never mind that most western entertainment these days is so shallow it wouldn’t challenge a preschooler, something’s only considered mature here when the brains are splattering across the camera. So it’s blatantly for us and not the domestic market that Square Enix is doing this.

To an extent, you can understand why Square Enix would do this. Dragon Quest has infamously struggled in the west despite being a famous cultural icon in Japan. Where Final Fantasy has found a large, global audience, Dragon Quest has been niche, beyond a single market, and if Square Enix can find a way to spin that into a global property, then that’s a lot of money that it’ll be dropping into the swimming vault.

But, here’s the thing; Dragon Quest has a specific identity, and that identity is what people love about it. A few years ago, before the pandemic banned me from Japan (GodDAMNit, Scott Morrison, Prime Minister of Australia, people have family overseas. Open the damm borders), I had the enormous privilege of playing a VR Dragon Quest game with my wife and another couple that we were randomly teamed up with. We were all in hysterics playing this game, and it wasn’t because we were waving pretend swords around. It’s because there were those slimes, those bat-like drackys, and that Dark Lord that was challenging us. They were all colourful and adorable. It was a fantasy that was there for fun. The various numbered games all had serious moments to connect players to the narratives on a human level, but the defining characteristic of Dragon Quest, from its art to its music, to its very gameplay foundations, was about uplifting players.

“Edgy” is the antithesis of everything that Dragon Quest has stood for, and, sure, shoving “edgy” into Dragon Quest might sell a couple of extra copies to the west, but at what cost? What happens when, at the 40th anniversary, Square Enix puts on an art exhibition (as they did for the 30th anniversary), and needs to figure out how to work this game into an exhibit, when, aesthetically doesn’t fit with anything else that Dragon Quest has ever offered? Will the existing Dragon Quest fans appreciate their love of the series being trodden over just so a handful more Americans can discover the existence of puff-puff, and then take to social media to lecture the world about how perverse that is… actually, everyone knows how puritan you’ve got to make your art to sell over there, does that mean the mighty puff-puff will be removed from the series altogether?

But more seriously… I think: Square Enix wisely dropped a teaser trailer for Dragon Quest XII that showed us absolutely nothing. That trailer (above) features nothing but a swirling flame and an ugly, “edgy” logo. It doesn’t set a great impression or tone, but at least it’s not showing us what an “edgy” slime would look like. I would strongly suspect that the Square Enix PR and marketing teams are going to research closely the response to this “dark and mature” promise, and quickly soften the game if the fans show signs of rebelling. There is, after all, a massive sliding scale of things that are “darker” and “more mature” than the Dragon Quest series to date, so there’s a lot of wriggle room for a near-complete backtrack if it all looks like things are going to get too hairy.

While I would never suggest that a developer compromise their creative vision based on fan feedback, I also sincerely doubt there was any creative vision in taking Dragon Quest and deciding to Dragon Age it. C’mon, Square Enix. Do the right thing here. People come to Dragon Quest for humour, slimes, colour, high adventure and puff-puff. If we wanted Dragon Age, we’d just bloody well play that.

How would a Disney princess look like if she was Columbian?