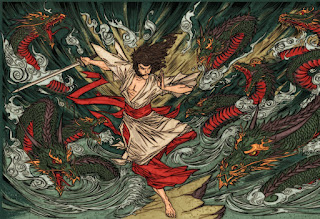 Susanoo is one of the great deities of Japanese mythology. He’s the brother of Amaterasu, and was considered both a benevolent and, at times, malevolent kami (deity). In other words, he’s the perfect source of inspiration for a game, and that’s exactly what developer, Hachikumasoft and Mebius are doing with Susanoh: Japanese Mythology RPG. I’m not sure why other English outlets are localising the title that way, because it absolutely should be Susanoo: Japanese Mythology RPG, but on the off chance that there is an official localisation on the title that I missed, I’ll leave it that way).

Anyhow, naming issues aside, Susanoh (sic): Japanese Mythology RPG is looking absolutely gorgeous. It’s Japan-only for now, but it like a beautiful trip into Japanese folklore and storytelling traditions, backed up with some gorgeous art and the promise of beautifully classical JRPG combat.

The game releases on July 22 in Japan. Sadly we don’t have an English announcement, yet. Some Mebius-published titles have been localised in the past (Creeping Terror, Gnosia), so it’s not outside the realm of possibility. We just need to find a publisher to do it. Put this trailer in front of them. That should do it.