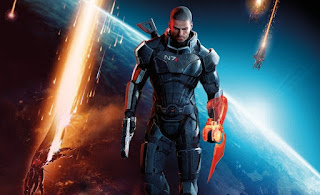 One of the few big blockbusters that I have cared about in recent decades is about to get a long-awaited remaster. Yes, I am talking about the Mass Effect trilogy. Putting aside Andromeda, which was a horrible step in the wrong direction, this series of space operas has captured my imagination in a way that is rare for space-faring science fiction. It’s not usually my thing. Mass Effect was. What’s more, it’s an even rarer beast than that: it’s also one of the few examples of a “shooter” that really captured my imagination.

I won’t have a review up in time for the trilogy’s launch, unfortunately. For some reason EA doesn’t see much value in engaging with DigitallyDownloaded.net (I wonder what that might be?!). But that’s okay. I’m not that interested in reviewing them anyway. I’ll likely do some more thinky pieces as the replay refreshes my memory on the series, but to celebrate the launch of the trilogy, I’m going to instead talk about the black cloud that has always hung over Mass Effect; the ending of the third, and concluding chapter in the trilogy.

It should go without saying that since I’m talking about the finale of the last game here, there are going to be spoilers. I’m going to be as vague as possible, but if you don’t want to be spoiled on this, it’s as simple as this: stop reading. I’m not responsible for you avoiding spoilers on a game that’s generations old at this point. With that disclaimer out of the way, here’s the controversy in broad strokes: after playing through three full-length RPGs filled with intricate and morally complex decisions (seriously, your decisions can range from a close personal friend dying to an entire species being genocided), you get to the climactic final battle with the Reapers. They’re an army straight from the same school of philosophy behind ecological sustainability as Marvel’s purple alien, Thanos. In short, they plan on wiping out all the intelligent life in the solar system so that the next “generation” of species have a chance to thrive.

Anyhow, this final battle takes place on Earth, because ultimately this series is a series of blockbusters and of course it would make a solar system-wide conflict all about the humans in the end. But something strange happens as you battle your way through the intense final engagement. Rather than some epic battle with the biggest monster of all, you instead find yourself whisked away into the heartland of Reaper thought, and the game ends soon after.

There, you’re given a paltry few options to decide between (just three in the original game), and that’s it. Credits roll. For all your careful decision making and the way you have shaped the very solar system around, you, for the hundreds of hours of adventure to that point, your final moments with the great Commander Shepherd involve making a whimperingly ineffectual decision. All that agency that the series manicured to that point is torn from you at that last, critical moment.

It was a classic example of a developer choosing a specific creative vision over the ending that the audience likely wanted. Of course, there was thematic weight in what BioWare did. You didn’t need to necessarily like it, but whether you liked it or not Mass Effect 3’s ending was a powerful deterministic thought bubble, coupled with an underlying sense of existential dread. Ultimately, the game wanted to tell us that humanity is a tiny leaf adrift in a vast ocean that can and will swallow us at some stage, and while our inclination is to fight – and indeed we should – there is an inevitability and futility underneath our actions.

But how the gamers did roar about this. Such themes were much too complex when they really just wanted Shepherd and whoever they hooked up with (Garrus) to win against the bad alien robot-monsters and head off into the sunset to hump away for the rest of their lives. The idea that “Thanos” might win, or at least his darkly grand philosophy continue on into perpetuity, was unpalatable to the gamers.

And so, they did what gamers do best; unrelenting anger. BioWare copped it big time, and copped it again, and again, and again. In the end, BioWare was pressured into “fixing” the ending. That new ending did shift the public perception of the game, however slightly (the reality was that the new ending didn’t “fix” things all that much). It also sucked so much creative purity out of the game.

That was not the precedent this industry needed to set. There had been games previously that had upset players and/or reviewed poorly, but Mass Effect was the first (or, at least, the first really big example) example of a developer being cowed into something other than the creator’s vision by the hornet swarm.

All of this is fine… If you think that video games are a product and a developer is less of a group of artists and more akin to a service provider, like a phone or Internet provider. The difference is significant. Artists don’t need to make things that we like. If you don’t like a book, play, or painting, then, by all means, criticise it, but in those art mediums, there’s never the expectation that an artist should change the work, completely, to satisfy the consumer. If the artist has delivered what they want to, then you can’t fix it if it’s not what the audience wanted, because we’re talking about the artist’s vision. Not the audience’s. In fact, there’s the understanding that sometimes a work of art can (and should) depict something unpleasant or uncomfortable as a way of challenging the audience. An art form only works as an art form if there’s room for the art to be something other than beloved, because art has an educational and conversational role in society which is not satisfied is every single person that experiences it uncritically loves it.

If you do think that games are merely a product for consumption, then I don’t know what to tell you, other than that you’re boring. If your idea of life is to cruise through being unchallenged and uncritically loving every single experience that you have, to the point that you feel entitled to get it changed if it falls outside of your tastes, then you’re living a very limited, shallow existence. You’re never really thinking, you’re never really learning, and consequently, you’re also never going to have the deepest sense of satisfaction that comes from experiencing something powerful, provocative and evocative.

So, as we’re all playing the Mass Effect Trilogy this week, let’s just remember that these games, as wonderful as they are, also changed gaming for the worse. Because, thanks to them, a new sense of entitlement came into the industry and completely disrupted the relationship between developer and audience. Effectively, we were told that no longer was the creative vision of the artist something to value. Now, game developers were expected to give the fans exactly what they wanted, and what fans inevitably want is nice, safe, homogenised experiences. Mass Effect 3, in so many ways, represents the turning point that has resulted in the blockbuster side of video games being rarely worthwhile today.

Be sure to grab the Dee Dee Zine this weekend! What to look forward to