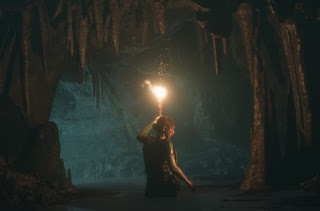 One of the more enjoyable horror experiments in recent years has been the Dark Pictures Anthology. Developer, Supermassive Games, committed itself to a series of horror experience that shares some things in common – a cinematic approach to horror and some standard gameplay conventions – while at the same time playing with different sub-genres within horror.

Related reading: Get started with The Dark Pictures right at the beginning with Man of Medan. Our review.

We’re getting close to the release of the third in the series, with House of Ashes being a different beast again to the Salem-themed Little Hope and the ghost ship experience of Man of Medan. With House of Ashes, we can expect something more action-based, as a group of western and Iraqi soldiers are forced to band together to survive truly ancient horrors that they uncover under the sands of Iraq.

And we really are talking about ancient horrors. Will Doyle, game director at Supermassive Games, said that the team had a great deal of fun researching the history of Naram-Sin of Akkad, an important personality from one of the most ancient nations of all (The Akkadian Empire rose and fell thousands of years before Jesus Christ). “It was huge and fascinating and a load of fun,” Doyle said. “Nobody knows all that much about that period for definite, so we’re gaining our information from old tablets and statues. We took trips to the British Museum, we’d read a lot of literature about the period.

“In some respects, we’re painting our own picture of that time, because when we go there in the game, we have to see all this detail up close and ‘live’. So based on our historical research, we recreated our vision for a place this ancient. We were figuring out what those characters should look like and how they dressed, through to the architecture and art, and it was absolutely fascinating.”

This alone is a significant departure from the previous two Dark Pictures titles, where the development team had a lot more modern and understood reference materials to draw on. In turn, this seems to be giving House of Ashes a stronger element of the exotic and fantastic – ghost ships are one thing, and the well-trodden ground of the Salem witch trials another. A delve into a culture so ancient that most of us can’t conceive it existing is on a different level altogether, and may as well be a trip through a twisted version of Narnia. From the first look that we’ve been given, it looks very good indeed. After its first announcement, my assumption was that House of Ashes would be a spin on the same aesthetics and mythology as The Mummy, but Supermassive Games seem to have done what it needed to do to give us a sense that what we’re encountering this time around makes Ancient Egypt look positively modern.

One thing I did want to talk to Doyle about was the choice of genres for the Dark Pictures anthology. Outside of the field of video games, horror takes on many different forms, and many of those don’t involve much action, or even bloodletting, at all. So far the three titles in the Dark Pictures anthology have been clearly action-orientated, but Doyle and his team are well aware of just how many other directions they can go. What’s more, they’re quite keen to explore all of those options. 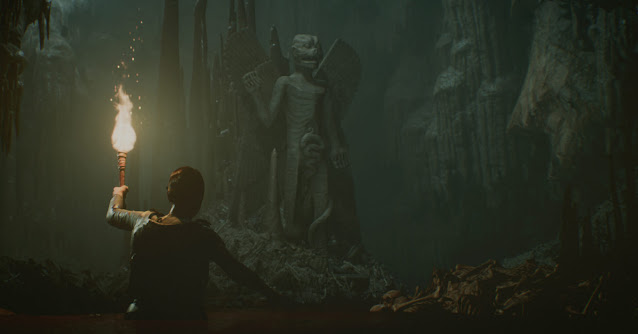 “We have identified 39 different sub-genres of horror, and we’re always chucking around ideas for the kinds of stories that we could tell,” he said.

“We do want all of them to be as different as we can make them. That’s one of the attractions of the series to our fans – you never know what you’re going to get next. For example, the first teaser for House of Ashes came at the end of Little Hope, and that was great because we went from this moody folk aura to, at the end of the game, give players a bright shot of the Iraqi desert and helicopters thundering over it. That tonal shift was great.

“Now, we can’t develop entirely new systems completely for every new game, so our stories do have to git into hose for the most part, but we are developing more as we go, and broadening the range with which we can work.”

House of Ashes will indeed have a number of new features, such as some huge areas (where both previous games were rather restricted in the spaces that you’d explore), and a more free, unlocked camera and focus on light sources and lighting. Players will need to shine their light around to find secrets and solve the mystery of House of Ashes, bringing a kind of exploration element that wasn’t as present in the two previous hyper-linear horror experiences. 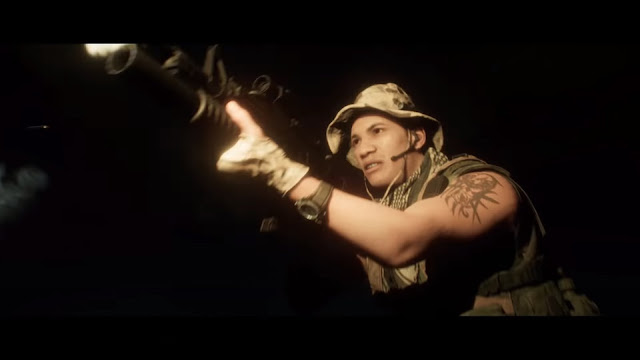 It might be set in a desert rather than the frozen mountains of Antarctica, but House of Ashes, therefore, has a kind of Lovecraftian theme, reminiscent of At The Mountains Of Madness, where intrepid discovery is both critical, and the source of much of the terror.

With Supermassive Games having planned for eight titles in the anthology, there’s so much room for it to move yet. Could we get a horror game like The Thing, where psychological paranoia is a greater threat than any monster, or a majestic gothic horror story of vampires and sensuality? Will George A. Romero’s philosophical zombies show up in one, or perhaps a game in the mould of The Exorcist, where the comfort of religion being shattered is the stuff of nightmares? Doyle is naturally tight-lipped on where the series may go beyond House of Ashes, but if anything eight titles seems modest for the number of dark holes this team could delve with the system that they’ve been building up around horror.

On the meaning of horror

People often assume that horror is one of the more simple genres – it’s just about making people jump and scream (before laughing at themselves), right? In practice, it’s actually one of the genres that encourages some of the deepest studies, because how horror works is so closely entwined with our psyches and the cultures that we live within.

So whenever I talk to artists working in the field of horror, I always ask them a simple question: just what does horror mean to them? 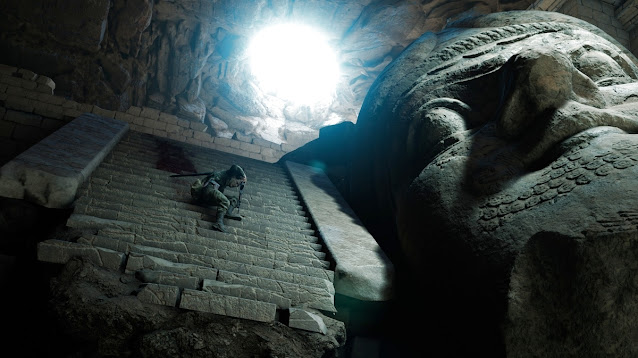 “We want to tell compelling narratives about human beings, thrust into terrible situations,” Doyle said. “And that’s the really interesting thing about horror. It’s taking people out of their comfort zone and put into stressful, perilous situations as seeing how they deal with that. From the point of view of the viewer, that’s one of the reasons why we’re interested in it. We project ourselves into those characters and ask ourselves what would we do in those situations? That’s where the fear stems from, it comes from the question ‘what if that was me? How would I respond to it?’”

The Dark Pictures games are interesting with this philosophy in mind for two reasons: Firstly, the narratives allow characters to die. Or, potentially, not die. Your decisions and your ability to respond to the horror will determine which characters walk (or hobble) out of the other end, and therefore Supermassive Games is very much playing on our ability to project ourselves onto the characters that we’re witnessing.

This is different to many other horror games, which end up being gory action skill-testers by virtue of the “game over” screen being the punishment for allowing the character to die. Such systems are certainly threatening enough to encourage some sweaty palms and a jumpiness at loud noises, but there’s no narrative punishment for how you, as the player, respond. It’s binary, either the character survives or the narrative is ended.

The other point of difference is that most horror games encourage a very solitary experience – put the headphones on, turn the lights out, and feel isolated (and therefore prone to being terrified). The Dark Pictures goes the other way. Entirely. The Dark Pictures actively encourage multiplayer participation through their game modes, which allow for shared control of characters and the flow of the plot. 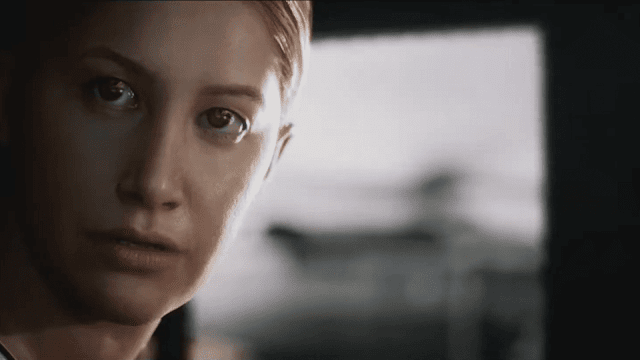 “There’s something magical about being in a room with a bunch of people and everyone jumping at the same time,” Doyle said. “We noticed something interesting when our earlier game, Until Dawn, came out, in which it was being enjoyed socially, and it was a big success on streaming services. That was the genesis for what we’re doing here – we realised that there was an appetite for the social experience in horror and we looked for ways to refine that for this series. I think there’s something just inherently fun about seeing your friends reactions as they are jumping, passing the controller around and saying ‘okay, now it’s your turn.’”

That effort to make The Dark Pictures as cinematic has also led to House of Ashes becoming the most complex project in the series to date, with a massive increase in the amount of motion capture that was performed. The jump to the new generation of consoles has also allowed the team to place additional focus on areas that are crucial to good horror, such as the lighting systems.

In totality, House of Ashes seems like it’s not just going to be another excellent entry in an excellent series, but also a clear statement of intent that Supermassive Games’ creative team wants to really push themselves with each new title in the series. And for that reason alone, you should not only be excited for House of Ashes itself, but the fact that, if this team gets their way, there are still five more to come after it.

Interesting games on itch.io: May 31