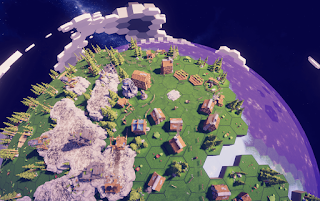 Team17 is most closely associated with Worms (and, these days, The Escapists), but the company has steadily built itself up as a publisher of a wide range of different kinds of game experiences. Indeed, Team17 was responsible for publishing one of my favourite simulators in recent years, Aven Colony. Now the publisher is backing another simulator, Before We Leave, being developed by Balancing Monkey Games, and I am very intrigued indeed.

Note: Before We Leave is currently available on the Epic Game Store, as a self-published thing. The news here is that Team17 has now jumped on board to bring it to Steam and, one assumes, if it does well enough, there may yet be a console port on the table.

Before We Leave bills itself as a “non-violent city-building game.” It’s set in a world that has just recovered from an apocalypse, meaning that the world itself is now ripe for exploration and re-civilising. This in itself is a fascinating concept. Just about any other “apocalyptic” game you can think on leans hard into the violence and lack of civility that you would expect from the world, so this is aiming to give us a very (very) different idea about how humanity might emerge from such a catastrophe.

But that’s not all that’s worth getting excited about. The game also has hexes, and has a wealth of different systems that play against one another – trade, mining, pollution, the happiness of your people, and defence (though no aggression) from beings from beyond the planet.

Since the launch on the Epic Games Store, the developer has continued to refine the experience, so Steam players will get something very polished right out of the “box”. It will launch on the store on May 13.

“Historical action thriller”, anyone? Treasures of the Aegean announced