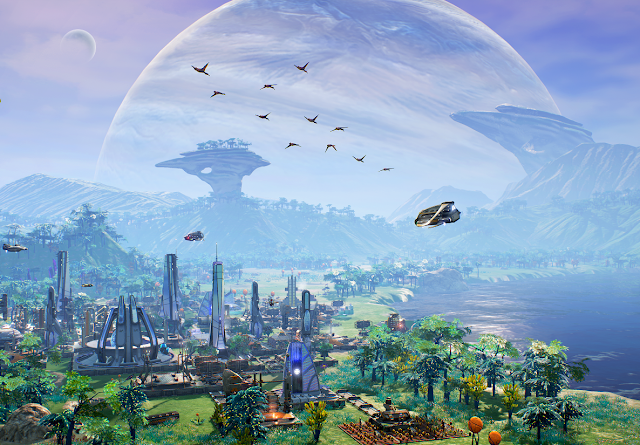 The classical city building simulator is an approach to game design that I’m quite convinced will never die. Decades down the track there will still be developers making games that are, simply, about building a balance of different types of buildings and structures that can handle a growing population in a sustainable manner. Any of us who have ever had an opinion on how our local cities should be run almost certainly gets a kick out of putting our ideas into motion in one of these city builders… to the point where if developers mess too much with the formula people tend to riot.

Related reading: Another city builder on PS4 well worth looking into is Tropico. Matt’s full review.

Tropico might have its humour trappings, but really it’s just Sim City. Cities: Skylines might be the Sim City we’ve wanted for many years since EA ruined Maxis but… it’s really just Sim City. And Aven Colony might be Sim City in space but, when you boil it down, it’s still Sim City, and that’s just wonderful.

The premise of Aven Colony is that humankind is looking for a new planet to settle, and your job is to take a tiny colony of pioneering settlers and grow it to the point where it starts to attract more settlers and eventually becomes a bustling space city. With an environment that is hostile enough that people can never venture outside of domed buildings, walkways, and workspaces, your job is to balance the economy, making sure that everyone has plenty of food, while also building them places to live, making sure they have employment, keeping the air clean, crime down, and giving your settlers things to do to keep them entertained. 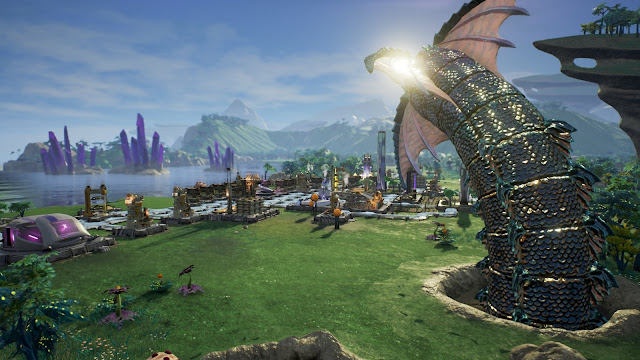 There’s a lot to balance to play well at Aven Colony, but it’s all presented in a beautifully clean interface, and a tutorial that has you comfortable with how to play in less than a half hour. There’s also a number of “story” missions, which are really just tutorial levels with set objectives that further teach you how to balance everything out. Hitting up the sandbox mode, which is where the real fun is, isn’t something that I’d recommend people do at first, but after a few of the story missions I gave up on playing those through and just enjoyed my time building cities from scratch.

Of course, like any environment that’s utterly hostile, Aven Colony’s offworld landscapes are filled with danger, ranging from alien life forms through to meteorite showers and lightning storms. There’s usually a building that can handle each of these issues, but as the colony grows, making sure that you’ve covered the entire environment with these buildings becomes an ever-greater challenge.

A far more subtle, but insidious threat, is winter. Those Game of Thrones fellows that are always complaining about an oncoming winter because it means a bit of snow and some zombie things have no idea what a bad winter is really like. Through winter – which occupies a shade less than a third of the total in-game yearly cycle, farms stop producing food, and greenhouses only produce half as much, meaning that your colony suffers a drastic drop in food availability. On top of that, solar power plants, which are the only source of energy that doesn’t result in a whole lot of pollution, also drop to being one half as effective, and that means other buildings might start shutting down if you haven’t accounted for winter demands. Thankfully, you can build storehouses to hold excess food (and use a trading port to get some emergency rations from off-planet if necessary), and batteries to store excess energy over summer and drain over winter to keep the lights on, but again these things can be expensive to build and maintain. 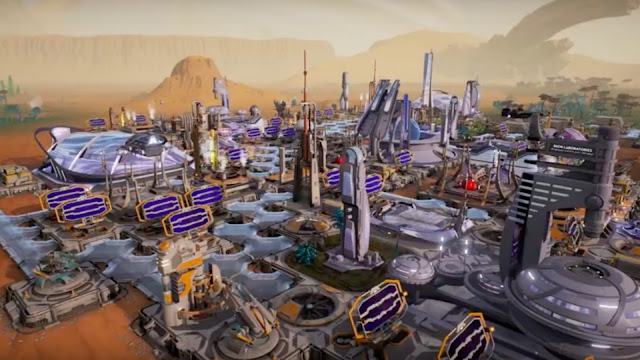 Even as you’re dealing with all those survivability issues, your citizens also demand you take care of their quality of life. They don’t like walking far to work, they don’t like pollution or crime, they don’t like unemployment or homelessness, they want to have access to hospital facilities, and they want bars, shopping malls, and other forms of entertainment. I know, picky, right? As a result of these demands, I noticed that my cities started to have a number of different quirks, which were all kinds of appealing on the eyes, and fun to build. My city would splinter off into a series of micro cities, where I’d have a mix of residential, work, and recreational facilities, with central areas between the micro cities dedicated to buildings that didn’t require workers; storage hubs and certain kinds of power generators. As each city grew, I’d pull the camera back and enjoy the pockets of glistening high rise buildings, connected through highways of tunnels and farms of solar power panels (I always invested in an excess of solar power).

I also started to create little stories and themes around my “CBDs” within the larger city. One area was dedicated to food production, and most of the people living in those areas were the farmer-types. Another area had the geothermal power plant (which hired a lot of people and produced a lot of pollution), factories and mines, and the people living there carried my colony’s backbreaking work, so I naturally gave them the biggest bars in the city to party hard after work. And then over in the other corner was a massive tower which housed my scientists, immigration officers, and other high-skilled roles. They had a park to relax in after work. I like to think they were the the kind if high-income specialists that would appreciate that.

I was creating these stories in my head because I was so thoroughly absorbed in what I was doing that I was really connecting with my little city. The tiny development team behind Aven Colony has done such a great job with the presentation and building variety in the game that I really felt that I was creating something distinctive and unique, and that suited my ideal of a dream offworld city. I am almost certain that other approaches to Aven Colony will be just as successful, and will reflect other philosophies towards city development. 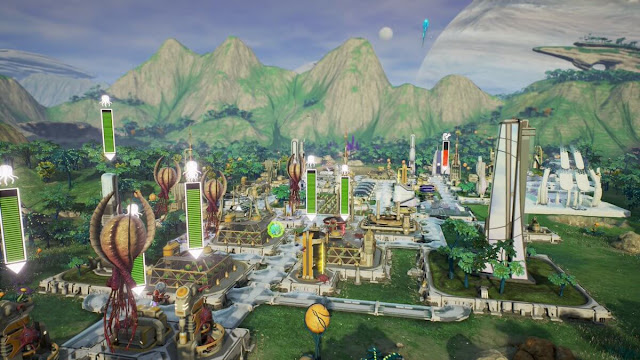 Ultimately, what is so great about Aven Colony is that its many varied systems are designed in such a way as to not be restrictive, and thus reward experimentation. Yes citizens don’t like walking too far too work, but the distance they consider “too far” isn’t so demanding – you can fit a lot of stuff in between their homes and the work location that you want them to end up at. Yes you need lightning towers to protect your city, but the radius that the lighting tower covers is great enough that you don’t need to play Tetris to fit the other essential buildings within it before you need to build the next one.

Related reading: Also recently released is Transport Giant, and what a worthwhile game that one is for people who like their sims hardcore. Matt reviews.

It has been a real joy playing Aven Colony. As with any good simulation game, it’s a fairly relaxed, sedate experience that’s engaging for the mind by offering so many complementary and conflicting systems to manage. Without involving the micromanagement of something like Transport Giant, it’s also a game that offers just enough complexity to offer players a management challenge, and a sense of rewarding satisfaction when they’ve built up a sustainable, large, city. The story mode itself is quite poor, but as with any good city builder, all the fun’s in the sandbox mode anyway, and unleashing both your inner creative and inner city planner at once.