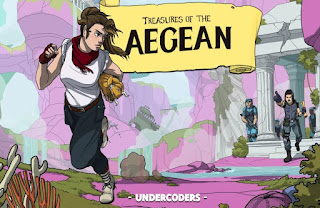 Treasures of the Aegean is being developed by Undercoders and published by Numskull Games, and will release at the end of this year for PlayStation 4, Xbox One, Nintendo Switch and PC. It is billing itself as a “historical action thriller”, and the game has a strong Euro comic-book aesthetic (think Asterix & Obelix or Tintin) and looks like a pacey, exploration-focused 2D platformer. It looks good to us, in other words.

In the game, you’ll be investigating what happened to the Minoan civilization, as playing as “parkour master” Marie Tayloe and treasure hunter James Andrew. Though it’s a 2D game it is apparently an open world that will allow you to explore as you see fit, and the game will challenge you by requiring a combination of precise action timing skills, and puzzle-solving capabilities.

The trailer gives you a good idea of what to expect from this one. Undercoders is a fairly experienced game developer now, having produced SuperEpic: The Entertainment War and Conga Master, annd this one looks like the team’s most ambitious effort yet.

Expeditions: Rome is a turn-based strategy game… sign me up!