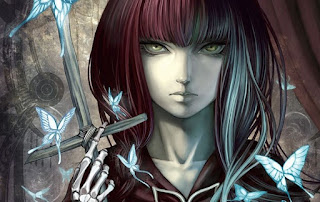 The Nintendo Switch has become a home for the visual noveLl, with more being released on the console than is easy to keep up with. It is a favourite genre of mine, though, so I thought I’d do some quick summary reviews of some of the recent examples that I’ve played: Legends of Talia: Arcadia, Synergia, and The House in Fata Morgana. One of these three, in particular, is a genuine contender as one of my favourite examples of the genre ever.

Legends of Talia wants you to think that it’s going to offer an epic fantasy adventure. Tracking along with the story of a hero of an empire in swords-and-sorcery times, this is a visual novel that promises dragons, drama, betrayal, action and some very fan servicey romance. Unfortunately, ambition well outpaces what this development team had the resources or temperament to give players.

In fact, one of the biggest problems with the game is that the most interesting stories seem to be what happened before the actual plot that the visual novel itself follows. The great hero spends a fair amount of time through the course of this game reminiscing about past military campaigns and romantic flames that sound like they would be perfect material for some excellent pulp fantasy page-turning action. Meanwhile, what happens in the timeframe of this visual novel itself is a battle with a dragon and, without giving away spoilers, the hero has the opportunity to right a wrong from her past. It’s over in about two hours of reading, and because it is so brief, there’s never a chance to give anything context. Rather, it’s a blink-and-you’ll-miss-it experience that doesn’t give you anything to think about, doesn’t say anything, and doesn’t really go anywhere. Imagine if you played a Final Fantasy game but only the first dungeon – you get to fight one boss and learn the names of a couple of characters, but you never really get to the crux of what is going on any why you should care. This is the problem with Legends of Talia. 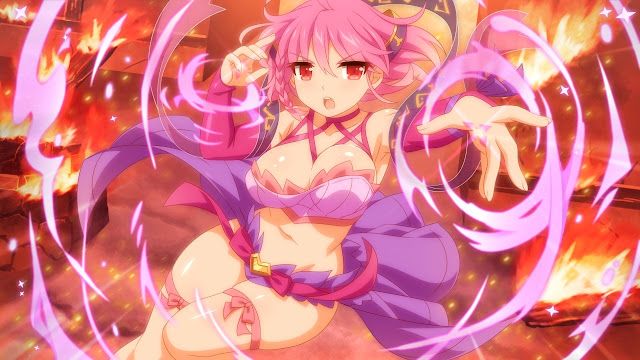 What it does have going for it are the key art CGs, which feature very under-dressed girls in very dynamic poses. The fan service hits real a real pin-up quality in this game (coming from the studio behind the Sakura Dungeon series this shouldn’t be a surprise). Unfortunately, those CGs are not backed up by the character sprites themselves, which are fairly simple and flat, nor the backgrounds, which are very simple and struggle to set the scene. Because there’s a limited number of character expressions available, the developers instead added an element of movement by having the sprites shift back and forth as characters “talk” with one another, but if you’ve got a decent reading speed the sprites shifting all over the screen for no reason whatsoever is a distracting look. Finally, there’s also a weird childishness about a lot of this game, from the character mannerisms through to the Pokemon-like dragon design, which are at odds with the fanservicey tone it otherwise strikes at.

There’s a lot I want to like about Legends of Talia. A fantasy-themed visual novel that isn’t an isekai is almost refreshing, and a morally conflicted, exhausted “hero” at the centre of the story is a nice idea. Unfortunately, this game is trying to do too much with too little, and in the end, it doesn’t achieve much of anything. You can’t achieve an epic narrative arc, culminating in an earth-shattering battle with a dragon, in a two-hour visual novel. The developers should have considered something a little more modest in scope and built up to this if they wanted to make this protagonist and setting really hit home.

On the positive side of things for Synergia, it is a genuine example of the cyberpunk genre. Far too many game developers out there produce “cyberpunk” which is really just a tech-neon aesthetic, and ultimately fall short when it comes time to deliver the punk energy. Cyberpunk isn’t just about robot implants and hot android sex. It’s also deeply anti-capitalistic, heavily rebellious, and, frankly, miserable. It’s a genre that reflects on the question “what if the corporations really get their way on everything,” and it’s hard to do that without a lot of transgression. Transgression by nature tends to make the artwork a risky financial venture, and consequently, too often what might have once been cyberpunk becomes a project nixed and turned into an aesthetic pastiche of the genre. Synergia, however, is genuine cyberpunk. It’s not aggressively boundary-pushing, but it’s certainly not happy about the vision for the future that it presents.

In Synergia you follow the story of a young woman, who, in noirish fashion (a common secondary theme for cyberpunk), is part of the police force, but is on the outer with it for not kowtowing to the powers that be. Her big problem is that sex with androids is illegal, but she can’t seem to help herself, and this becomes an even bigger problem when she comes into the possession of an android with very life-like behaviours and mannerisms. Throw in the presence of a hacker, a “terrorist” rebel organisation, and a chapte-based structure that starts each new chapter with a count down to some ominous event with quotes from existentialists and the bible, and there’s more than enough intrigue to keep the metaphoric pages turning. The language used, meanwhile, being both blunt and clear, gives the story a decisive, confident edge. There are issues with Synergia’s narrative (most specifically the moment where you’re given a “red pill” to swallow, which is easy to chalk up as a Matrix reference, but in 2021 has a lot of other connotations that have far less pleasant implications regarding the intent of the story), but overall it offers up a compelling, taut thriller that straddles the line between noir and sci-fi nicely. 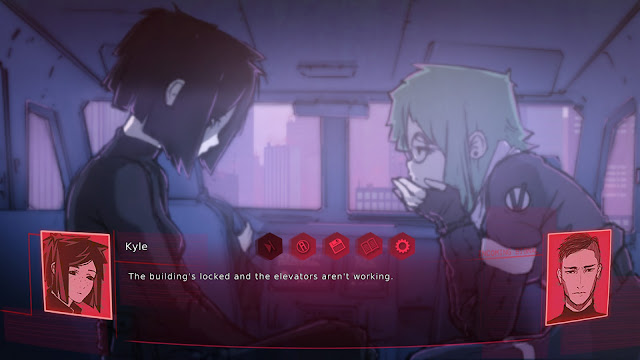 What I cannot stand, however, is the aesthetic the developers have used. The character sprites look washed out on the screen, backgrounds are plain to the point of being truly boring, and the overload of colour would be migraine-inducing if there was more movement, though thankfully there’s virtually no animation. The entirety of Synergia looks like a game that never replaced the placeholder art assets with the actual art. I think I understand, vaguely, that the intent was to give players a “hazy underground” vibe, or lean into the noirish themes by replacing the interplay between light and darkness with colours that make everything look indistinct, but it all comes across as too low-fi and even low-resolution for my tastes.

Still, cyberpunk is a demanding genre, and Synergia is a better effort at it than we generally see. It’s willing to tackle difficult moral questions, it shows genuine distress at the class systems and the hubris of corporations, and it’s science fiction without being gratuitous about it. I can think of a certain big-budget blockbuster “cyberpunk” game that doesn’t even come close to understanding the genre as well as this humble visual novel, and that’s saying something.

The House in Fata Morgana

I’m so glad this got a re-release on Nintendo Switch having previously been on the PlayStation Vita and PC. I would have overlooked it were it not a “new release” here and therefore an excuse to play it. The House in Fata Morgana is one of the most incredible visual novels you’ll ever play. It’s not just that it’s aesthetically gorgeous, but it weaves a complex tale, dips beautifully within both the gothic and Grimm Brothers-like fairy tale traditions, and is written with such a poetic etherealness that when it wants to hit you with something eye-opening, it hits. Hard. Perhaps the most impressive thing about Fata Morgana is how unwilling it is to hold its punches.

This game depits the full gamut of the worst of human impulses. While in theory it’s a story about a haunted house that is so cursed that if you exist within its walls you are guaranteed a miserable end, in practice it’s an exploration of the limits of human depravity. Framed in a very Dickens-like trip through history (i.e. A Christmas Carol-like snapshot of three different time periods and the people that lived then), you’re going to get a view of bestial violence, innocence lost, incest, class warfare, blasphemy, obsession, xenophobia and hatred. Characters are built up as hugely sympathetic, only for the narrative to tear them down in the most spectacular way possible. The story plays on many classic and familiar tales, such as the romance of Romeo & Juliet or the warmth of Beauty and the Beast, and then subverts them them in their entirety. This game is dark, is the point. Beautifully dark, like the most powerful gothic novels, but it nonetheless revels in exploring the bleakest sides of the human condition, and in doing so it represents an exquisite, elevated kind of tragedy.


Backing this up are some of the most beautiful examples of visual novel art I’ve ever seen. There are some moments where it’s not as cohesive as I might have liked (like where the key art CGs are clearly drawn by a different artist, to the point that characters have different hair colour), but every background, character portrait, and key art design all angle towards taking the kind of fairy tale aesthetics that we’re all so familiar with, and subtly disrupting them so that they’re faintly sinister and a portent of the much more overtly sinister stuff that is to come. It’s all very static and the characters aren’t given voices, but I think that actually enhances Fata Morgana in reinforcing the picture book-like motif. Given that it’s also backed up with a soaring soundtrack with some of the best music I’ve ever heard in a visual novel, the overall impression is still very much “premium,” even without the Live2D and other modern visual novel tricks. It’s just premium via the sheer, distinct, original quality and creative energy.

There are moments where Fata Morgana becomes very uncomfortable to witness, and a little like when I played Saya no Uta, I did need to put it down from time to time. This game is nowhere near as explicit or extreme as that one, but thematically it is, if anything, more demanding of the player. It’s a little like how the real Grimm brothers fairy tales are deeply uncomfortable to read, though it’s certainly not of the extreme, overt violence of a Marquis de Sade novel. If you want to see how a visual novel could be elevated to something approaching “high art,” you owe it to yourself to play The House in Fata Morgana. The fact that the Switch release comes with even more stories and features as a “complete” edition just makes it all the more essential.