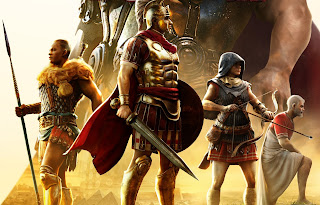 Developer, Logic Arts, has already taken us to the time of the Vikings and the Conquistadors with its Expeditions franchise. Now, in partnership with publisher, THQ Nordic, it’s going to take us to Rome. As someone who has always found the politics and warfare of that empire to be fascinating (and Caligula!), I am looking forward to this when it launches later this year.

In this game, you’ll be taking on the role of Legatus, whose father is murdered and has escaped Rome by joining a campaign to put down a rebellion in Greece. As you grow in power and stature you’ll also find yourself fighting across Northern Africa and Gaul, and dealing with the deadly, clandestine politics of the Roman Senate.

Expeditions: Rome has a turn-based combat system, and we’re also promised a deep, skill-based system of tactics, meaning that you’ll be able to customise your legion to suit your own strategic preferences. There’s even a levelling system for the main characters in your army, with each character able to earn a range of passive and active skills, to give the game an RPG-like level of depth.

The gameplay trailer below highlights some of the depth to expect from this system. It really does look like it will be a rich experience. The game’s only being released on PC at this stage, and I wouldn’t expect it to get a console release, either. None of Logic Arts’ titles has been ported to any other platform.

“Historical action thriller”, anyone? Treasures of the Aegean announced