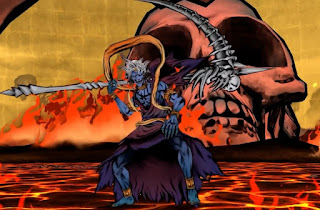 Each day I’ll review three titles from the most recent collection of releases. Today we have PlatinumGames, basketball and rhythm game action to talk about.

It seems that I can’t stop talking about Hyakki Yagyo at the moment. Whether it’s Nioh, Monster Hunter, or now World of Demons, Japan’s enduring love of “The Night Parade of 100 Demons” scrolls and storytelling tradition seems to be right in vogue at the moment among local developers. World of Demons is the most exacting take on that tradition yet, and it is also PlatinumGames’ finest development effort, aside from NieR Automata itself. In World of Demons, you run through small, linear levels, fighting off a gauntlet of yokai that pop off a scroll and directly into the range of your sword. It is visceral, fast, challenging, dynamic, and offers exquisitely precise action. It is PlatinumGames to a “T”. 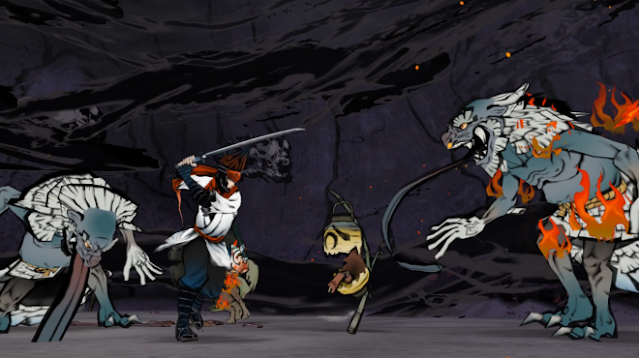 It’s not just awesome that you get to fight a huge range of monsters in World of Demons (over 100, each with their own unique designs, attack patterns, weaknesses and quirks). It’s not even that the game has a wickedly sharp sense of humour, as fits with the vaguely sinister playfulness of yokai of traditional storytelling. This is a game where you get to make full use of PlatinumGames’ trademark mastery over fast action and twitch responses to weave, duck, dive and counter your way through hours of adventuring, where you’ll find new enemies and fighting styles to deal with at an extended drip-feed rate (the benefit of having over 100 monsters to encounter along the way). Hell, this is a game where you’ll get to fight an otter that is a master of the drunken fist combat style, and that combination is just delightful on every level. World of Demons is all of the above, and it’s all that good, but it’s also so much more, because you get to collect these monsters as you fight them, too. Every single monster is a different summon that has a different ability, and while all of these have battlefield utility, many of them are also required for solving puzzles, too. Mixing, matching, levelling up, and forming strategies across such a massive, Pokemon-like range of monsters to collect and turn into special abilities gives World of Demons a level of depth and strategy that you would never expect at first, given how fast and fluid it is.

Factor in the ukiyo-e-inspired art (which, no doubt, will be compared to Okami, but is much more appropriate to this game, given the narrative and visual arts traditions that Hyakki Yagyo belongs to), and a soundtrack that is heavy on the traditional Japanese instruments, and World of Demons is clearly a case of PlatinumGames looking to celebrate traditional Japanese culture and the arts. That is actually something that PlatinumGames hasn’t done before, but the aesthetics, theme, tone, and quality of action here suits the developer perfectly, so, more of this in the future, please.

Amusingly enough, because the Apple Arcade doesn’t allow microtransactions on games, 2K Games needed to strip that monetisation out of the NBA 2K21 Arcade Edition. It’s actually a nicer, friendlier game to play because of it. It’s just a pity that 2K also removed the wrong modes of play from the game. The Arcade Edition only offers career mode and a quick game option, and while I understand and fully appreciate the need to cut things back to make it work on Apple Arcade, why the hell isn’t there a season mode, 2K Games? The one way I like to play my sports games is one of the casualties of the port to the Arcade, and that makes no sense, because season mode wasn’t encumbered by microtransactions in the first place. 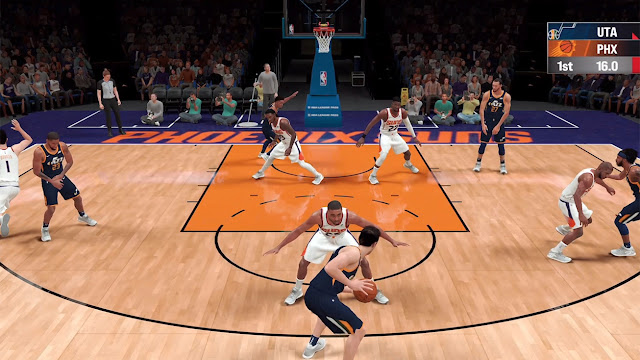 The Arcade Edition does play nicely on the Apple TV with a DualShock controller in the hands. You can set the timing and precision of shots to be managed by player stats if you would like – meaning that the ball will go in the net based on the character’s ability rather than your own timing. Or you can instead make your own ability determine how accurate shots are… I gave up on that quite quickly as I was sick of my team’s stats all tanking. In career mode you need to meet objectives in-game to improve your scorecard at the end. I quickly gave up on that mode though, as I’m just not that interested in career modes in sports games, leaving me with nothing but a quick-play option.

The game looks fine, though obviously paired right down over what you can eke out of your PlayStation 5 version of the game. Just what kind of graphical performance you get seems to depend on your device. On the Apple TV, for example, the crowds seem to have been turned off, which lends games an odd energy and atmosphere; the sounds are still there but the chairs are empty. I call it “COVID-19 match mode”, though, so for now it’s actually timely. Also, the crowds are there when playing on higher-end iPhones. Whatever the case the animation is smooth and the range of camera angles are great. This is a good game of basketball and strikes a good balance between depth and accessibility. I just wish that 2K didn’t use this as a bare-bones demo for the full console experience and gave us that season mode.

Taiko no Tatsujin has become one of the most iconic stars of the rhythm game genre, and that’s because it is so straightforward in concept: you hit the drum in time with the music. Everyone on the planet understands how that works, therefore everyone can play a Taiko the Drum game. Across an expansive soundtrack drawn from vocaloids, anime, JPop, classical and video game music, Taiko has been delighting people in and out of arcades for years now, and while Pop Tap Beat isn’t doing much to add to the property (it even uses the same track list), it’s awesome having this in the pocket for play on the go, too. 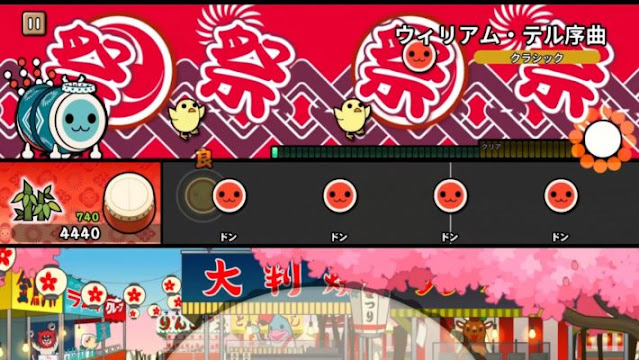 You can’t escape that it is the least version of the Taiko series, however. Tactility is important to Taiko games; the feeling of the drum being hit in time with the music, or, at least, the resistance of pressing down on the button. On the Apple Arcade, this has been replaced with touch screen controls, and I found that the lack of tactility actually threw my timing enough to be an issue. I’m pretty good at rhythm games at this point (hundreds of hours perving on Hatsune Miku… I mean playing with her… I mean playing games starring her will do that), and I found it harder to get good scores on Taiko the Drum than any other version of Taiko I’ve played, or any touch-screen rhythm game that was built around touch screen inputs.

With that being said, there’s all the usual Taiko charm in there, from the expansive range of silly costumes to dress your character in, to the explosion of bouncy energy in the background whenever you get on a roll. There’s even online play, though I wasn’t able to get a match going in my testing time (perhaps it’s not the most popular of the 30 game drop to work through). I’m sure it’ll catch an audience though. It is, after all, Taiko the Drum. That’s a level of charm that is difficult to resist.

We’ll be back tomorrow with three more of these Apple Arcade new releases!