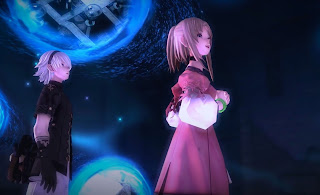 Each day I’ll review three titles from the most recent collection of releases. Today we have some casual puzzle action, a JRPG from some of the genre’s greatest legends, and an update of a game from 1971.

The first weapon shop that you find in the first town of Fantasian really highlights what this game is about. Hanging on the wall at the back of the store is a replica of Cloud’s iconic sword from Final Fantasy VII. You can’t wield it. You’re playing a different character and he’s not Cloud. He is, however, some kind of eco-terrorist and the world is being destroyed via a mechanical-driven plant-robot plague (it’s vague at first), so he and Cloud would have been best pals, and this is clearly a game that stands in homage and reverence to that epitome of the genre. Fantasian travels familiar themes and shares stylistic and aesthetic parallels to Final Fantasy VII, in other words, and comes to us from Mistwalker, the development studio set up by the “Father of Final Fantasy,” Hironobu Sakaguchi. It even has legendary Final Fantasy composer, Nobuo Uematsu, contributing to the score, and it very much looks, sounds and feels like a PlayStation 1-era Final Fantasy title as a consequence. An authentic PlayStation 1-era Final Fantasy, no less, because it has been made by the people that actually made those classic titles. 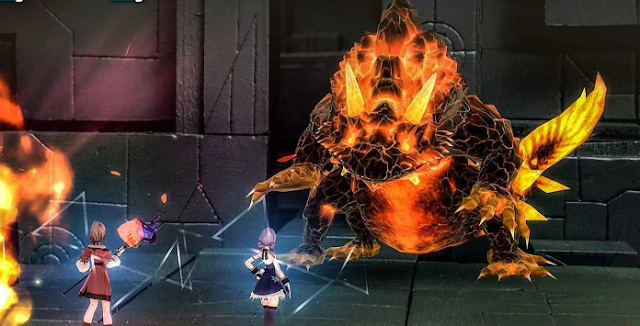 That’s not to suggest that Fantasian lacks its own identity, though. It features storybook sequences, which are vaguely reminiscent of what Sakaguchi did with Lost Odyssey back on the Xbox 360. These sequences need to carry a lot of the characterisation and emotion of the game, so it’s just as well that they’re beautifully written, and supported with some gorgeous hand-drawn art aesthetics. The combat has a fun twist on the standard menu-driven turn-based action, too. Line of sight matters in Fantasian – a burly fighter at the front of a row of enemies can protect those behind him and act as a shield wall, as physical attacks need to draw a direct line of sight to the enemy to be able to strike. However, magic attacks can be curved, so using your party in such a way that you can deal with different enemy configurations is core to the game’s strategy, and while it’s mechanically simple, it does add additional texture to what might have otherwise been seen as a little pedestrian.

The world is beautiful to explore, and apparently, it was created by building actual dioramas of the various environments and then scanning them into digital data. It’s the perfect way to capture the isometric perspective of those PlayStation 1-era Final Fantasies, while also ensuring that it looks modern and a deliberate homage to those classic games of yesteryear. On every level, Fantasian is aware of itself, and also confident that there are still people out there that love the classic qualities of older JRPGs in such a way that they can deliver. It’s a confidence that I certainly believe that the team behind this game has every right to hold.

There aren’t many games that are older than The Oregon Trail. The first version of it landed all the way back in 1971, as an early (perhaps the first) effort at edutainment in video games; you’d be playing a game, but at the same time you’d be learning something (in this case, the challenges and tribulations that the early colonisers of America went through as they headed out west). That original game is too old to play now, in so many ways. In addition to being entirely text-based, the game lacked the certain sensitivities towards native peoples that we now expect. But there have been many efforts to rebuild the game for a modern audience in the years since. Gameloft’s take on The Oregon Trail on Apple Arcade is a good ‘un.

The Oregon Trail is, in very simple terms, a resource management experience. As you trek across the great wilderness of America, your party of explorers slowly sheds health and hygiene and consumes food. Meanwhile, their wagon, which carries all their stuff, can start to damage and degrade, meaning that you might start losing that precious stuff off it. You need to make simple decisions, hunt, and otherwise battle against the attrition to arrive at key landmarks on the road, with the eventual goal being to reach Oregon itself. The Oregon Trail isn’t easy, by any means, and you’ll constantly be challenged to make tough trade-offs in the name of survival. There’s no medicine out in the wilderness, either, so heaven forbid if one of your characters should accidentally hurt themselves. And then there’s dysentery. You think COVID-19’s scary? Wait until your peeps start getting themselves sick with dysentery.

Gameloft has made the game pleasant to look at, with a pixel art aesthetic that bubbles along with colour and verve. Unfortunately, it’s impossible to hide that this is based on an incredibly old game, and we’ve certainly seen similar efforts that offer more of everything, including the all-important random events to experience on the journey. The thrill of exploring the unknown does wear away when, after just a couple of outings, you’re now experiencing the thrill of the far-too-familiar events and occurrences. Still, the educational heart of the game is still there (the lives of these intrepid folks and the little pockets of civilisation along the road are a fascinating bit of history), and Gameloft has done a good job in bringing appropriate sensitivities into the game to make it something to give to the kids to play today.

Simon’s Cat is a very mobile-casual kind of puzzle game. There’s a place for that, and the game gets away with having a particularly attractive aesthetic and fun use of the very fun Simon’s Cat property. It’s certainly more enjoyable, more rewarding, and outright better than the likes of Candy Crush. But it’s never more than a passive time waster.

The puzzle board is going to be immediately familiar, as will the rules – tap on blocks that are joined up by at least one other block of the same colour, and the blocks will disappear. The more blocks of the same colour that are connected, the better the result, and if you start connecting up rows of five, six, ten or more blocks, you’ll also start getting powerups, which can clear large sections of the grid each time. The goal is to achieve a certain objective (clear away a certain number of one kind of colour block etc) within a certain number of turns. Because there’s no penalty for failure, though, this game never feels punitive in its challenge level.

There’s very little puzzle logic involved, though. You don’t know what blocks will drop into the playfield after you clear some away, so most of Simon’s Cat, like the million other games like it, simply involves spotting opportunities to remove blocks so that larger sets of blocks can pair up. There are no time limits to take turns, so you’re not even asked to think fast. It’s the kind of game you can play while watching a movie and not, for a second, think that it’s demanding your concentration. What saves it is the fun – if silly – story that is unlocked by completing “puzzles,” the personality of the cats and characters, and the really gorgeous art style. I would never pay for something like this, but in the context of the thirty other games that got released on to the Apple Arcade in one go, I’m glad it’s there as a relaxing time-waster.

We’ll be back tomorrow with the last of these Apple Arcade mini-reviews features (for now)!