The big news today is that Sony is going to be shutting down its PlayStation Store for the PlayStation 3, Vita and PSP, meaning that you’ll no longer be able to purchase nor download games on those platforms. What does this have to do with the Anbernic RG351V? Simple. Given the utter irresponsibility towards the arts that these companies are displaying, emulation’s the future for those now-classic games. I used to be uncomfortable with emulation, as I do believe that artists have a right to make money from their work, and they have a right to determine how they make money from it. However, the games industry has become so utterly consumed by its capitalistic drive over any respect that it may have had for the arts that I’m now quite comfortable with my hobby of collecting emulation consoles. My newest acquisition, the Anbernic RG351V, even plays PSP games. In fact, it’s the best handheld emulation console I’ve added to my collection to date.

In terms of internal hardware, the console’s roughly aligned with the RG350M, and in testing it plays Game Boy, Game Boy Color, Game Boy Advance, NES, SNES, Master System, Mega Drive, Game Gear, Neo Geo Pocket, and WonderSwan Color games almost universally flawlessly. The rare game might drop a frame or two here and there, but that is the rare exception to the rule indeed. It also emulates most PlayStation 1 games without many internal hardware issues (though the console itself only has one analogue stick, which means the occasional PlayStation 1 game that used two analogue sticks won’t work very well), and has MAME support that will be fine for arcade games up from roughly the same time period as these consoles. The RG351V also has support for Nintendo 64, PSP and Dreamcast emulation built into the default operating system, though these three are much more hit-and-miss. Most N64 and Dreamcast games don’t work particularly well, but with the PSP the odds are better. The more demanding games tend to stutter, but almost all the platforms JRPGs that I tested worked fine, as did some of the lesser action games (the Dynasty Warriors and Samurai Warriors titles I tested worked, for example). You can imagine how happy I was to see that my favourite genre was covered right up to the PSP on this little device.

Given that the entire industry is united in its preference to let the heritage of video games die unless they can continue to re-monetise the games, this console is a great way to access the games from yesteryear. It has two microSD card slots – one card comes installed with the default operating system, and while you can mess around with that (and install alternative OSes, if you prefer something else), that’s mostly for advanced users. For people like me, you can simply leave that alone, buy a 128GB or 256GB microSD card and, once formatted to the right format (it’s the only technical step, and this 10-minute tutorial will walk you through it quite easily), drop all your games on to it. Note that 256GB is going to be more than enough to hold all the games (and I really do mean all the games), so once equipped with one the RG351V becomes a pocket-sized personal museum to the entire history of video games. 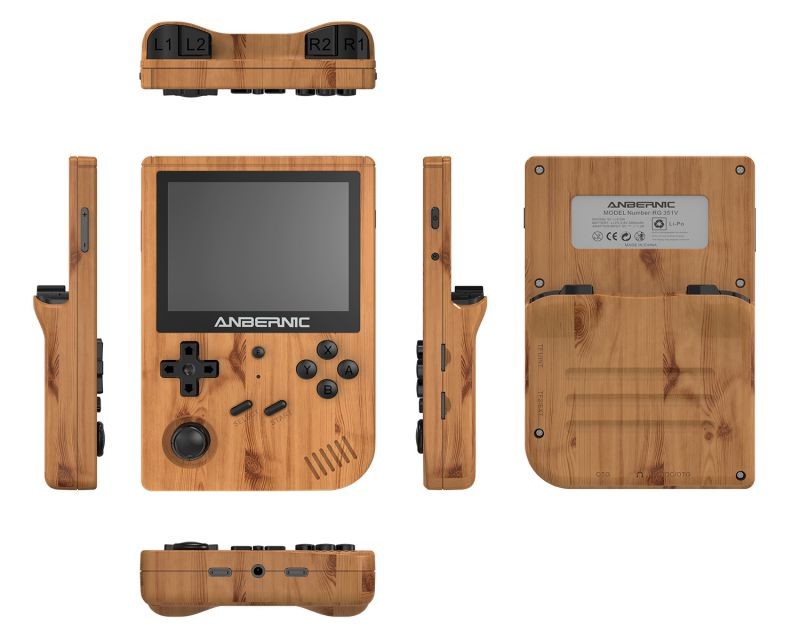 The build quality is absolutely impeccable. I’ve said this about Anbernic in the past, but where other emulation consoles from China may look the part, and be fun to play around with, they inevitably feel like something designed and constructed quickly from cheap parts. Meanwhile, Anbernic consoles have a build quality comparable to Sony and Nintendo themselves, and ergonomic designs that make them comfortable to play for long periods. The RG351V fits the hand like a perfectly-sized glove, with both D-pad and control stick easy to reach on the left hand, and the face buttons all soft and with just the right give for the right. At the back of the console are two shoulder buttons on each side, with the L2 and R2 raised, so that it’s easy to distinguish between the two when you can’t physically see them, and so you won’t accidentally press down both of them at once. The screen is gorgeously big, and the only part of the console that starts to get warm from play is the space behind that screen, where your fingers won’t touch (note: it never gets too hot anyway, but it’s still nice that the heating effect is kept away from the hands). The only thing I don’t like about the design is the way that you need to click down on the left stick AND press the middle “function” button in order to exit a game… though in saying that I’ve probably just not found the setting to change that and I’m just dealing with the default setting. As with all emulation consoles the RG351V is highly customisable… you’ve just got to know what you’re doing.

Related reading: Another Anbernic special is the mini, hyper-portable RG280V. Our review.

This is a good first emulation console, however, as it’s all immediately playable out of the box, and while the “instruction manual” is absolutely terrible (they always are with these devices), the only thing you need to know is how to format the SD card, as I’ve described above. Otherwise, you simply scroll through the interface to find the game you want to play, select it (you can also set up a list of favourites for quick access), and then, when you’re done, remember to press down both the left thumbstick and function button to bring up the menu to exit. The only other thing is to remember to shut down by pulling up the settings menu from the main interface (the “select button” on the console), rather than powering off by pressing and holding the power button on the side. Safe shutdowns are important for preserving the integrity of the SD cards and all that.

The end result of all of the above is that the RG351V is a little more fiddly than “proper” consoles by Sony, but it’s also far more pick-up-and-play and accessible to a casual audience than some other emulation handhelds. More advanced users can get more out of it, but it’s by no means necessary. 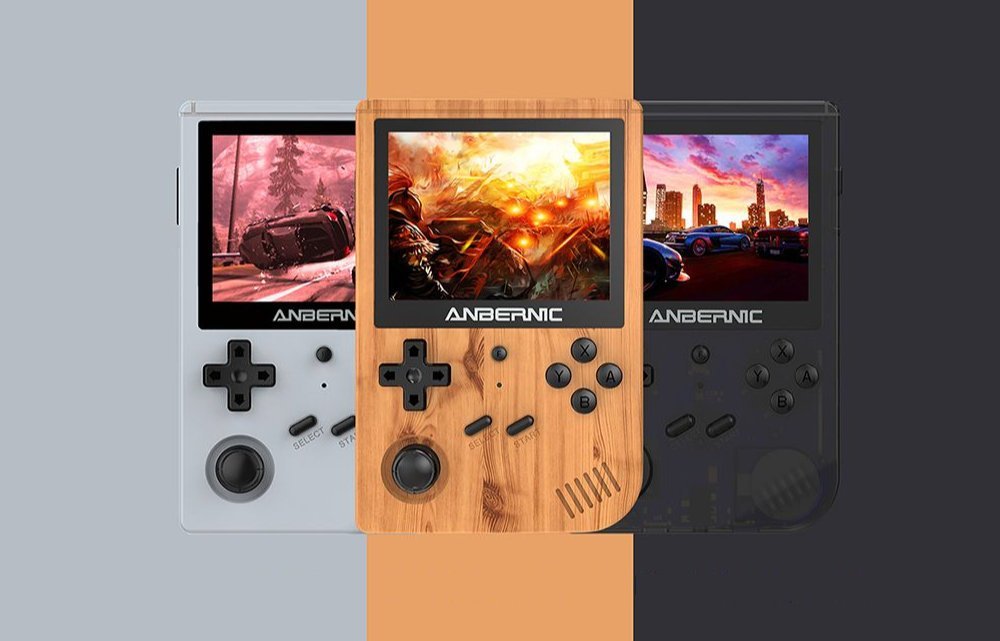 The console is available in a couple of different colour designs, but I immediately gravitated to the wooden aesthetic, as wooden electronics are a favourite aesthetic of mine. Unfortunately, it’s an artificial effect with the RG351V (it’s plastic and patterned), but it’s not cheap looking by any means. Indeed, it’s so striking that when I was playing my unit on a train recently someone noticed it and actually asked me what “new console” I was playing. Anbernic, if you’re reading this, you owe me a commission for that one sale. The console has a nice texture in the hands (it’s not smooth, and feels a little like the PlayStation 5’s “rough” texture on the grips), and there’s a really good balance of weight across the device. It’s not light by any means, but it has been weight distributed so that it settles comfortably into a standard grip.

Really, the only other issue with the console is the battery life, which is not great when playing higher-end games (around four or so hours, I’d say), and charging the console up again takes a long time. In addition, for some reason, the battery indicator on the screen in the menus isn’t always accurate and sometimes claims that I have very little battery power left after a full charge, only for it to fix itself and display a full battery a minute or so later. It’s a minor issue in the grand scheme of things, but not knowing exactly how much battery you have left is a downer when you’re wondering whether you’ll get all the way home from your trip without it running out.

There are a lot of features within the RG351V that I’ll never bother with. I believe you’re able to connect controllers up to it, for example, and it’s fully customisable if you’re so inclined. I’m not looking for that. All I’m really looking for from these devices is a console that is comfortable and enjoyable to play games on, and which will allow me to access all that art that the likes of Sony and Nintendo have decided holds no value, and they’d rather see lost to us than preserved. With its gorgeous screen, premium build and simple accessibility, Anbernic has outdone itself with the RG351V. It’s the best emulation console yet.