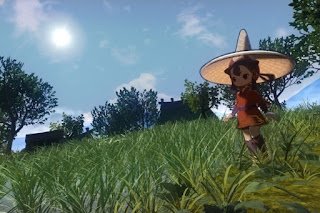 I never played Astebreed, the previous game from the two-person team behind the upcoming Sakuna: Of Rice and Ruin. Astebreed didn’t really look like my thing,t but a game that promises to delve into Japan’s mythology and cultural passion for rice certainly is, and based on my early impressions, Sakuna is the real deal. This is one of the highlights of 2020.

The game offers an odd blend of 2D platforming and 3D Harvest Moon-like crop growth, only that instead of growing a range of crops as you do in Harvest Moon, here you’re focused entirely on rice. The 2D platforming is there to support the farming; by exploring the world, breaking up rocks and defeating enemies you gain a range of materials that are then used for crafting new equipment, creating fertiliser for the crops, and as ingredients for the evening meals.

Those 2D platforming sections look fairly modest in comparison to the work of a developer like Vanillaware, but I was immediately impressed with how well it plays. In addition to a standard blend of fast and powerful attacks, your protagonist and whip around enemies courtesy of her scarf, which is both an effective defensive manoeuvre (it’s effectively the dodge button) and an offensive tactic (to get behind enemies that have shields and so on). At first, it feels a little clumsy, but that’s only at first. A few hours in and you’re slashing, hacking and scarf-jumping with the utmost of mobility and the combos flow with a graceful flow reminiscent of the best fighting games. Enemy design is a little pedestrian at this point, but if you think of the 2D platforming like you think of the dungeon crawling in a Rune Factory title then it all starts to make sense – as much as the promo material wants you to believe that this stuff is core to the game, it really exists in service of the farming.


That farming really is complex, nuanced, and interesting. I go into some detail about just how lengthy and laborious the process is in a video (above), but this game accounts for everything in the rice production process, and you’ll move through a full year worth of seasons for every crop (don’t worry, each season is only a few in-game days long). From tilling the soil in spring, to making sure that the water levels remain high through the dehydration of summer, through to making sure that the rice is harvested and dried before winter sets in, farming in Sakuna is a process and a reflection on something that the Japanese culture holds almost sacred in its reverence.

Speaking of the divine, I’m still a little early into the game to get a really good sense of how it engages with Japanese storytelling and mythology, but Sakuna does very heavily engage with that stuff too. More casual audiences will miss a lot of the references that the game makes to Kaguya, Momataro, yokai and Shinto tradition, but it all comes together to offer an experience that is confidently Japanese to its very core; not just in terms of the aesthetics, but the very thinking behind it. You’ll need to wait for my full review for my thoughts on the overall narrative, but what I can say is that in this early stage I’m as intrigued by it, as a student of Japanese storytelling and culture, as the likes of Okami have previously.

More than anything else, it’s hard to believe that a game this refined, this mature, and this thoughtful was the work of just two developers. It’s easy to dismiss Sakuna: Of Rice and Ruin for lacking the sheer level of detail of bigger games, but you’d still think that this was the work of a small team, rather than just a duo. Given that it’s punching well above its weight in terms of production and gameplay refinement, the fact that it’s also a clearly thoughtful, intelligent project – something big blockbuster projects continue to prove can’t be brute-forced into a game for any amount of money, has made this one of 2020’s standout releases, already, before I’m more than a few chapters in. The developers would never refer to what they’ve put into this game as content, and that’s something that the entire industry should take note of.

Sakuna: Of Rice and Ruin – Why I love this game