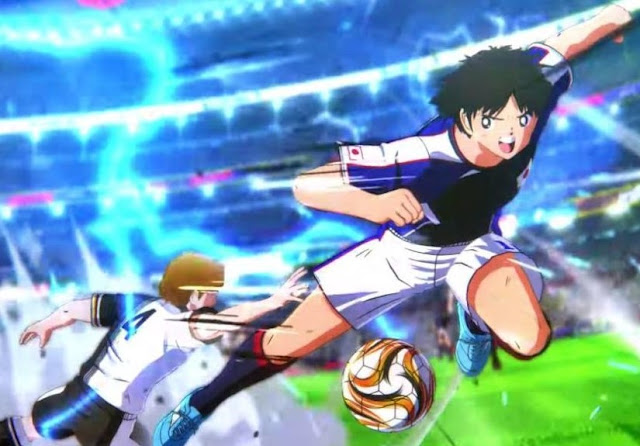 Who the hell needs FIFA and PES when you’ve got Captain Tsubasa to play now? Not me. This humble little “arcade football game”, produced by a tiny team at Tamsoft for a fraction of the cost that EA and Konami’s monoliths are made with, is simply better entertainment. I mean, sure, you can’t stare awestruck at a precise digital recreation of Neymar’s face, but since the real football games haven’t managed to emulate Neymar’s inability to stand up, that “realism” in the face mapping area doesn’t really mean that much, when you think about it. Captain Tsubasa, meanwhile, has real personality and charm going for it.

Unlike the more serious football games, you won’t need to memorise dozens of control inputs with Captain Tsubasa… which is a good thing. I miss when football games were a simple, clean combination of pass, shoot and tackle commands. Key to success in this particular game is managing each player’s stamina for sprints, and knowing when to press the “dodge” button to avoid tackles and efforts to shove your player out of the way and steal the ball. Do it really well and it’s possible to run the entire length of the field with a single character, but of course the higher-level AI will never allow that to happen. Coupled with a fairly pacey flow, Captain Tsubasa does feel like an arcade experience, though one that, unlike some other arcade football titles (remember SEGA Soccer Slam?), still manages to resemble the behaviour of real football.

There’s some real energy to the action. Little cut scenes highlight special shots and particularly heroic displays of tackling and passing. The only real hope you’ve got to score on goal is to let loose with one of those special shots, and each time you unleash one of those, you get to watch the goalkeeper desperately try to grind out a save, which may well end up hurling him, ball and all, deep into the net. Coupled with the cel-shaded visuals and character models that are appropriate to the classic anime and manga property, and Captain Tsubasa is quite the audio-visual treat. All that lets it down is some occasionally wonky AI, but it’s nothing that outright ruins the game. 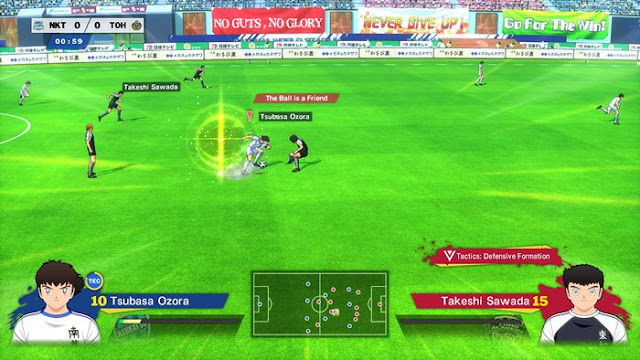 Captain Tsubasa offers two narratives via the story mode, and combined those two form the bulk of the game. As someone who has never actually watched (or read) Captain Tsubasa, I do assume that the first narrative tracks along with the anime narrative arc, while the second is more a self-insert original story. That being the case, the stories are truncated in a way that we’ve seen with plenty of other anime tie-in games, but unlike various One Piece titles or the recent Fairy Tail, Captain Tsubasa is a sports game, and we don’t necessarily expect in-depth narratives with this genre. It’s enough that it gets its story across well enough that even those who are unfamiliar with the property will be able to follow things and recognise the major players on the field.

If there is something to be disappointed about with Captain Tsubasa, it’s that the customisation options aren’t really there. I was certainly not expecting a FIFA-like deep simulation, and I was certainly relieved to find that the developers didn’t try to convert depth into monetisation via that stupid card collecting game that dominates modern FIFA efforts, but Captain Tsubasa doesn’t give you much control off the pitch whatsoever. Some kind of stats, injury and replacement system would have gone a long way (even if it was quite simple in execution) in allowing you to feel like you were making the team your own.

Indeed, beyond the single-player game, the shallowness of Captain Tsubasa does become an issue. You can play a tournament, though with such limited customisation and management tools, this doesn’t play out as much more than a sequence of matches. There’s also online and local multiplayer, which plays nicely, and thanks to the easy arcade accessibility is a hoot in a way that serious sports sims just can’t compare (no one likes to spend an hour “learning” a modern sports game during a booze-and-games Friday night gaming session). However, when playing with mates there are so few teams to choose between that it is an issue in itself, with just a tiny few international squads, and then a dozen or so local squads to choose between. You can create your own teams too but that is a laborious process, and if there’s one thing I will give FIFA it’s the fact that you’ve got a hundred of your favourite teams to choose between out of the box. 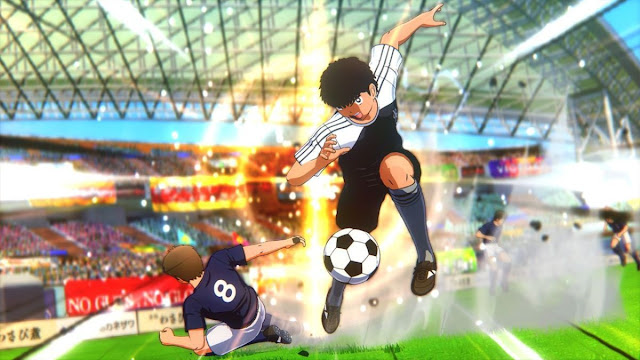 It’s hard not to fall in love with the game, though. The presentation is gorgeous, and the way that the game cuts to little cut scenes mid-match (in the story mode) is a spot-on effort at capturing the vibe of sports sequences in anime and manga, where they are character delivery mechanisms as much as a celebration of the sport itself. The stadia are gorgeous in scope, and because the camera is zoomed quite close in in-match, there’s plenty of movement and excitement filling the screen on-pitch. Some people might be put off by the character models and designs, as Captain Tsubasa hearkens back to the ’80s, and anime aesthetics have changed considerably since then. But then, there’s still a clean “vintage” look about what Tamsoft has done here, and it’s appealing regardless of your experience with “vintage” anime.

Coming to Captain Tsubasa as a fan of football, but knowing nothing of the anime and manga, I had no idea what to expect from this game, but I was more than impressed. Tamsoft, a company better know for little skirts-and-panties games like Senran Kagura, spinoff Hyperdimension Neptunia titles, Onechanbara and School Girl/Zombie Hunter was up against it with this game. After all, how do you compete with the might of EA and Konami without going so far into the realm of arcade experiences that the game is no longer recognisable as the sport? Tamsoft genuinely managed to figure it out. Captain Tsubasa is a back-to-basics football game with excellent pace and considerable verve. It’s not just for existing fans of the anime or manga; this game is perfect for anyone who wants to enjoy clean, entertaining football action with their friends without having to first send them off to a college degree to learn how to play.

Captain Tsubasa: Rise of New Champions – Why I love this game