Sade will also feature five characters, including two that we’ve not met in previous VNs yet. So, over the next couple of weeks, to get you all acquainted with the “Dee Dee crew”. Given that it’s such a quiet week for news and such this week (and it really has been quiet – I’ve been desperate to write something), I figured we may as well do two of these character profiles in the one week, and this time around we’ll look at one of the new characters that hasn’t really appeared in the VNs before, Amelia.

Amelia is the sporty one of the team. She’s an aspiring beach volleyball player – rising rapidly through the ranks of the senior tour, and while conventional wisdom would hold that she’s too short to make it in that sport (seriously, height is very important to beach volleyball – look it up), Amelia’s got the grit and determination to work around that and make the most of her athleticism.

When she’s not on the volleyball circuit, Amelia’s particularly quiet and comes across as quite reserved. You’d never expect that a person like that could gel with a group as… vivacious as Dee Dee and her friends, but everyone appreciates Amelia for her earnestness and groundedness. She is the foil that keeps the rest of them in check. 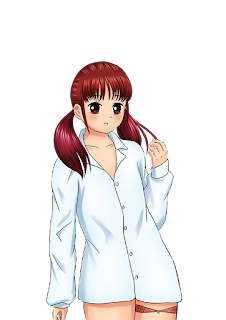 Amelia also has a particularly casual approach to life (outside of how seriously she takes her volleyball). She’s not interested in spending big on fashion or style, and isn’t overly comfortable with dating or partying. She’s as happy to stay home on a Friday night and bust out her retro gaming consoles as she is heading out for the night.

Amelia comes to the group via some social beach volleyball (of course)… she met Dee Dee and Lorin over a game once, and they all hit it off. No one can say a negative thing about Amelia.

Sade will be the first time that Amelia has formally appeared in a VN, though she plays a brief (and unnamed) cameo in Summer Loop, the previous VN. If you support DDNet on Patreon, you will also get the VNs free, with even a $1/month pledge… and you’ll get additional insights information, and sneak peeks that only members can access. For example, the regular updates on the Patreon page that are exclusive to backers include art that hasn’t been previously seen. What’s more, later on this month, Patreon backers will gain access to a special (and exclusive) “teaser demo” of Sade, which will allow you to play through the first chapter of the overall game.

A Japanese novel you should read: Kirino Natsuo’s Out