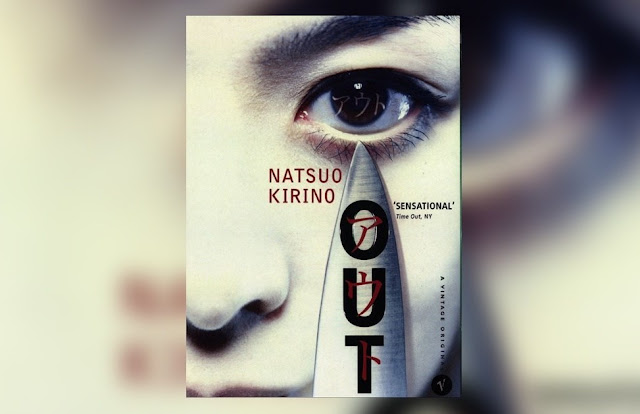 I have previously reviewed Kirino Natsuo’s Grotesque, but with Out, she has solidified herself as my favourite modern Japanese author. Out was actually the first Kirino novel to be translated into English, and if you’ve not had the opportunity to read it yet, you should jump at it – it’s a masterpiece of modern detective fiction.

Just as with Grotesque, Out is a work of crime fiction, but it’s not a mystery per se. We know exactly who the perpetrators are, those who are arrayed against them, and we have a strong understanding right from the outset how things are going. Many people see “detective fiction” and immediately assume some variation of “whodunnit,” but Out is instead crime fiction because it looks at the human condition, how it might lead to crime, and questions who the real victims are in the whole unfortunate situation.

Out tracks the stories of four women who work together on the overnight shift at a convenience store packed lunch factory. All four of the women are feeling the weight of Japanese society pressing down on them. One can’t help but wrack up massive debts with loan sharks to buy things she can’t afford. Another is struggling to send her daughter to college. Another hasn’t spoken to her husband or son in years, and the fourth has a no-good husband that spends all his time at illegal casinos and chasing pretty (and expensive) hostesses around. The fourth eventually snaps and murders her husband, while the other three then agree to dispose of the body. Unfortunately for them a local yakuza got pinned with the crime and decides to take investigations into his own hands, and a too-smart loan shark starts sniffing an opportunity…

Out is a story in solidarity for these four women, and an indictment on a society that allows for this to happen. Just like in Grotesque, Kirino is stridently feminist, but not in the sense that her women are heroes – far from it. Each of them are a kind of cruelty into themselves. Rather, the feminism comes in exploring how these monsters are made, how Japanese society acts to stifle and exploit women, and how isolating the experience of being a woman in Japan might be. To carry parallels to video games (since that is the bulk of what we do cover here at DDNet), the observations in Out (and Grotesque) are broadly in alignment for the experiences that Tokyo Dark explores, and just like that game Out has a tense, oppressive and near-claustrophobic intensity to it. With every turn and revelation, the noose just seems to get tighter around the necks of these women, all of whom long ago become broken shells in service to their lot in life.

These themes make Out an eclectic blend of a page-turner that’s impossible to put down (because you just have to see how events pan out), and something so unrelentingly bleak that it’s difficult to digest. The novel certainly explores the darker side of the human condition, and never takes a moment to surface for a breath. It’s quite the sustained piece of writing, too – one of the reasons that it’s taken me longer than normal to get through it – but it is written with Kirino’s trademark efficiency and pacing (I say that having only read the two novels, but it’s clear that she structures a slick pace around her work).

Because there’s no characteristic “hero” to the story and because there’s the focus on the way that the dark side of society has a tendency to swallow those within it, it can be said that Kirino writes to a kind of modern noir – something that we’ve seen is quite popular with Japanese authors in the space. The difference is that noir generally presents an argument of moral ambiguity – it’s a morality that can be compromised or even overlooked when necessary, usually by a private detective-type sitting outside of the law doing their thing. Out is absolute with its sense of morality – at no point does it suggest that murdering the husband was justified, and even offers sympathy for the yakuza who, against all odds, didn’t deserve to be drawn into it all. Kirino instead paints a picture of an amoral society, highlighting that there’s little value to staying clean in a world that’s going to roll over you anyway, and indeed there’s a form of liberation in putting aside that sense of doing the right thing by anyone – even yourself. It’s not a liberation free of its own consequences, but at the point that you realise that you’ve given up on society anyway.

Many people say that they come away from a Kirino novel feeling deflated and even depressed. There’s not much amusement to be found in the way that she looks at the world. But then that’s also the point; books like Out are valuable because there’s sobering, intense, and poignant. By all rights Out deserves to sit against the likes of A Clockwork Orange or In Cold Blood as a frank and unflinching look at not only the mind and motivations of the criminal, but also the society and conditions that create them.