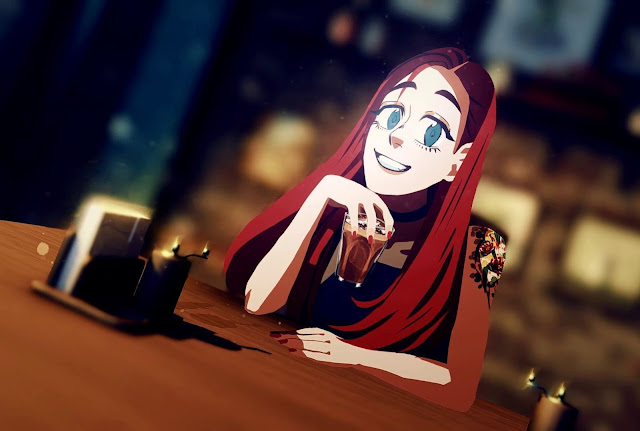 Ballsy move, basing Necrobarista in Melbourne instead of Sydney (insert appropriate humour about the rivalry between the cities here). However, with the developer based in Melbourne, it isn’t really a surprise, and Sydney folk will need to give it a pass there. Regardless of city location, however, Necrobarista creates a unique experience within the video game landscape full of Australian puns and references. For once there is something in the media world that is definably Australian but isn’t a reference to Crocodile Dundee or that damn Simpsons episode. Now we have references to Australianisms like Ned Kelly because there is a guy called Ned who has a tin head.

Set in an undisclosed back ally in Melbourne, the game entertains players to a prospect of the future which those wandering through to the afterlife can find themselves having a cup of coffee before the final goodbye. A pit stop to the afterlife in a city known for its great coffee. Players are introduced to the world of The Terminal, and the baristas that inhabit the world are fluent in the art of necromancy. Somehow it seems like a believable concept, especially as the story starts to develop with genuine human connections between the characters with believable motivations.

While the cast is small, these genuine actions help the universe seem lively and draw the players into the lives of the characters. Maddy hates Ned, an enforcer for the Council of Death which controls the time people can remain on this plane of existence. But the game’s playful about it, and Ned hangs around like a fly stuck to honey. Another character, Ashley, is an inventor that tinkers around with items found in The Terminal… and which are not necessarily above board. She has an obsession with knives, which might be concerning, but she has also crafted a bunch of robots which are used for breaking up the chapters. They’re pretty neat, and give you a summary of events to that point between chapters. 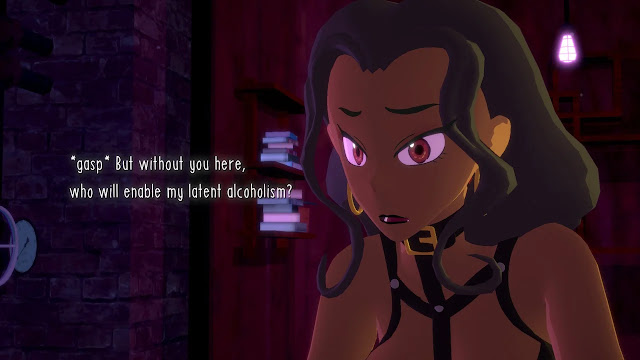 In Necrobarista, those that pass through the planes of existence are given 24 hours before they must move on. This rule isn’t necessarily set in stone and can easily be flaunted in front of a society set on controlling a balance. However, those who overstay their welcome will find their bodies dismantling themselves by the imbalance. This rule is a constant conflict point for characters within The Terminal, with the way each character deals with their own personal demons and beliefs when it comes to this given space of time. However, while there is the tension of this expiration of time, the attitudes of everyone involved is a typical Australian “she’ll be right”. Feelings of dread about impending non-existence are five seconds away from the abundance of inappropriate jokes Australians like to make around the subject of death. While there isn’t necessary dialogue that directly is inappropriate or insensitive, the writing style embodies how Australians commonly communicate cope with the subject of death as a culture.

The main passing through character is Kishan, and his interactions with Maddy, Chad, Ashley and Ned embodies the player’s curiosity for what these characters are doing. The interactions he has are more of a self-discovery journey though he is also assisting others with achieving their own goals as a way for him to feel fulfilled, rather than fixating on his own demise. It’s a clever narrative set-up to ensure that we get to experience a wide range of stories.

Other visitors to the cafe outside the main four outlined above provide fleeting moments to break up the story slightly. They occur at just the right moments to add to the overarching narrative and bounce off the main characters, but unfortunately, these characters do not have an overarching arch, despite being interesting enough that you’ll want to know more about them. Thankfully the developers have committed to DLC exploring additional characters and plot lines. 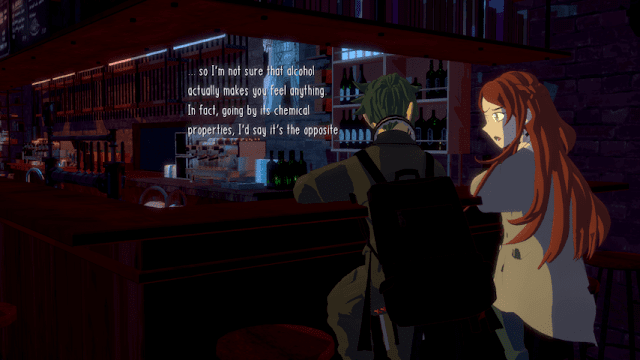 Whether you do experience this future DLC or not, though, the main point is that the universe of Necrobarista is far from barren or unlively… nor is it a passive narrative experience. Every so often you’ll be given a collection of words which you “remember”, which earn points that unlock stuff in the intermissions. It is here that the player can transverse a 3D environment, clicking on various objects that offer additional narrative exposition. For example, at one point you learn about one of the many ways that you can earn additional “time”; an underground gambling ring that Maddy exploits. A story later elaborates on the method used by Maddy to win, and the challenges she faced.

All of these experiences are wrapped up in a bow by the stylistic animation and lighting choices that make characters as well as environments pop. To harmonise the emotion in the story, the game features an excellent soundtrack composed by Kevin Penkin of Florence fame. The soundtrack’s techno beats that certainly fit an underground necromancy community within a cafe. But it also mellows at the right time for more serious conversations that create a feeling of intimacy between the on-screen characters. While at times the soundtrack can feel similar at times, it is utilised well enough that it makes the game feel complete.

Necrobarista is an eclectic mix of things. It’s a character-driven musing on life and death. It’s a deeply Australian story written by Australians. It’s both funny and sincere. It’s one of those games that will stay with you long after it’s done, and it’s the kind of culturally-relevant artefact that gives it value beyond its scope as an entertainment product (though it’s certainly entertaining too).