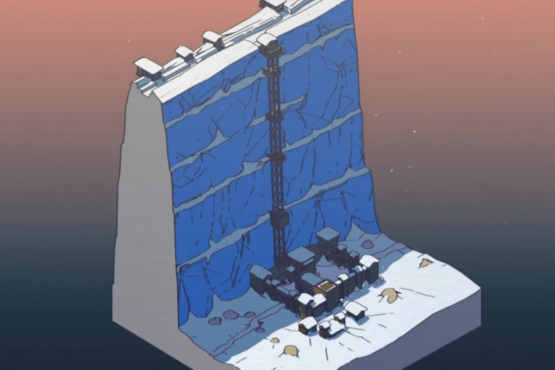 How can it be this hard to do a Game of Thrones video game that does the property justice? There’s more than enough material to work with. You’ve got dark, grim fantasy, monsters and all. You’ve got dark, grim political intrigue, (human) monsters and all. There are gory battles, strategy, tactics, individual heroism, and a long list of different factions, each with their own attributes, leaders, legends and lore. It’s almost as though the novel’s author, George R. R. Martin, wrote the whole thing with the express intent of turning it into an expansive media property. And yet absolutely no developer can seem to get the video games right. There have been attempts, and one or two almost come close to being memorable, but nothing that matches the strength of rival properties like Lord of the Rings. And then there are festering wounds like Tale of Crows which, as a fan of the literature, just hurt to see.

Tale of Crows bills itself as an “idle real-time narrative-driven game.” What that means in practice is that you’ll do very little, and then wait a while for the opportunity to do very little again. In theory, the game traces the legends of the great wall in the north and the various Lord Commanders of the Night’s Watch that were charged with maintaining the wall, marshalling the forces of the Watch, and keeping the nightmares from beyond away from civilized peoples. In practice, this all boils down to reading a paragraph of text, making a couple of limited decisions in response, and then waiting for the next events to pop up.

It’s beautifully designed, which is a nice change from the usual “efforts” we see with no-engagement time wasters. Tale of Crows tantalises you with the kind of visuals that you might expect from some intricate strategy or narrative game, which is why it hurts all the more every time it pulls the rug out from under you by giving you so little to do. When I think “Game of Thrones,” I think of a real struggle and war of attrition, where resources are scarce and you’re constantly up against the (proverbial) wall. The struggle should be as intense as the brutality and that’s why every betrayal and twist feels like a knife to the gut, as humanity constantly undercuts itself in a mad, short-sighted struggle for survival. 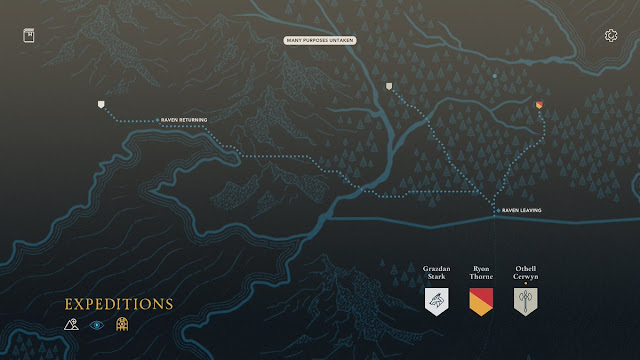 There’s very little of any of that in Tale of Crows. There’s no sense at any point that you’re headed to a “game over”, and while the narrative does sometimes head down some dark pathways, there are so few decisions to make, and rarely do any of them have you struggling over which is the right direction to take. There are no trolley problem hypotheticals. There are no appeals to humanity like you’d see in the Papers, Please-likes. It’s very easy to keep ahead of the one major job that you’ve got to do – keep enough resources (manpower) to continue sending expeditions into the north. This is a game that has been designed to be played for a minute or two a couple of times through the day, and it actively discourages players to become invested in it.

And that raises the question; why make the game at all? There’s nothing wrong with time wasters or games built for short play sessions, but those games are still designed around giving players a good hit of engagement within their short play sessions. Crossy Road, for example, gives you a high score to give you a tangible goal to shoot for. Candy Crush has its range of levels and social features to build a culture around the game. Even most of the clickers and idle games have the endlessly increasing numbers that make it hard to look away. Tale of Crows limits itself to a half dozen paragraphs of text and a couple of choose-your-own-adventure decisions before actively demanding that you go and do something else for a while. There’s also no pressure to come back to make the next set of decisions since the game just “pauses” once the timers have ticked down and the next lot of decisions are waiting for players.

It took me one day to start forgetting to check in to the app to issue new commands. It’s never a good sign when a game that is meant to encourage a constant check-in has lost its audience within 24 hours… especially given that I’m a big-time fan of the property it’s based on. The presentation of Game of Thrones: Tale of Crows is gorgeous and I would love to see a more meaningful game do something with this aesthetic. If only because it would also mean that, finally, a developer has figured out how to do the franchise justice. 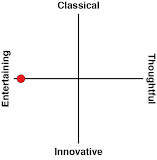 This game is free with an Apple Arcade subscription.

“Masterpieces”: What are they, and do we have them in videogames?

13 Sentinels: Aegis Rim is the most gorgeous looking game