Mittelborg wants you to think that it’s a blend of resource management, roguelike adventure, and esoteric storytelling about a doomed city that exists in the ether between planes. That sounds great, right? It did to me when I started playing this, and while I would very much like to play that game, Mittleborg also isn’t actually it. Beneath the concept, the entire experience is nothing more than a waste of time and energy.

To start with the core gameplay loop; Mittleborg is a turn-based resource management game. There’s a big tree-between-worlds that you need to protect, and a couple of hostile forces that exist to try and destroy it. Each turn you need to assign “wizards” to defensive structures, which will help mitigate against the damage caused by lightning strikes, invading enemy hordes, and similar. As you upgrade various defensive buildings, brew potions, and find treasures in other worlds, your defences get progressively better in repelling attacks.

At the same time, you’ll need to catch magic-rich “winds” which act as a currency to finance these upgrades and defences, and then, on the rare month of calm, you need to venture into expeditions on other planets in order to find additional resources. Finally, while all that is happening, you’ll periodically have “story” sequences pop up in which you’ll be provided with a number of different options in response, with each option having a different consequence. 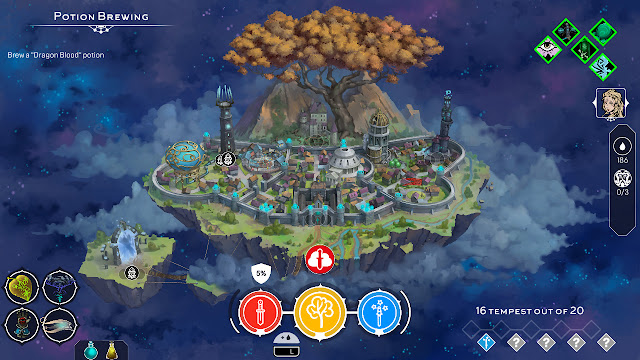 If that sounds like it’s a lot, it’s really not. The game takes forever to explain everything, but once you’ve worked through that tutorial you’ll quickly realise just how shallow and rote the game is. The forces that attack the city are randomised, as are the story sequences, but the responses that you’ll need to make to each are the same every time. Resource management is difficult, in the sense that you’ll never have enough resources and the game is an endless war of attraction and making the best you can of the hand you’re dealt, but it never quite manages to break out of that mould either; playing “well” isn’t really satisfying because there’s never the room to make some really clever decisions to deliver a resounding victory.

Meanwhile, the game’s intriguing narrative premise is all but ruined by a clumsy translation from the developer’s native Russian into English. It’s readable – just – but so clunky that the game fails to develop any tone, rhythm or atmosphere through the writing. With the visual aesthetic being so mundane, Mittleborg really needed the writing to set the scene, and it simply fails at that.

Finally, the UX is woeful. While the game’s design is clearly point-and-click and with the PC as the lead platform, there’s no touchscreen support in Mittelborg. Meanwhile, the controller interface is truly odd, and in a way I can’t easily explain – you need to use a combination of both control sticks to move the pointer between the various city building and other menu items, and it never stopped being the most inefficient way I could think of to navigate around a glorified menu. 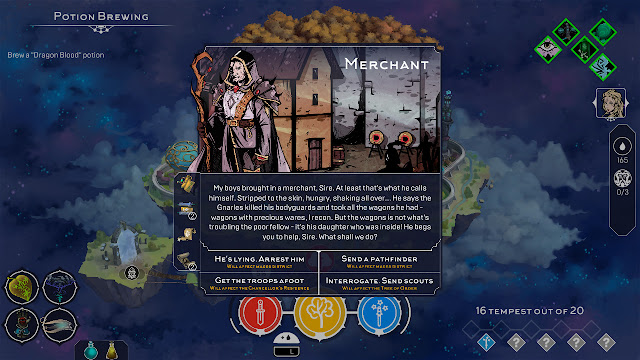 There’s very little else I can say about Mittleborg. The game has an intriguing premise and I want to believe the developers had some intelligent ideas behind what they’re doing, but between the painfully shallow strategy, the laboured (via translation) writing, the mundane, uninspired presentation and the shonky interface and UX, there was nowhere left for me to go to find something I admired about this game. For story-driven roguelike strategy, I highly recommend Thea: The Awakening (also available on Switch). Mittelborg is a different game to it, but the energy and intent does cross over between the two. It’s just that Thea is also made exceptionally well, and this is not.