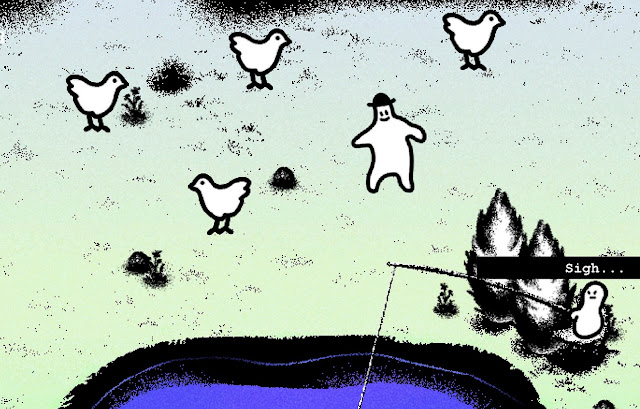 I’ve been coming to appreciate short games more and more in recent times. With a shorter run time, the challenge is on the designer to provide a consistent and structured experience, and often this is done by cutting out the chaff from an otherwise longer game. That’s exactly the ethos with Studio Sott’s Hotel Sowls, a surreal adventure game in which every character and every object is in perfect service to the game’s creepy tone. This is a game which, with only some simple sketches, a great soundtrack and a cracking script, kept me more on the edge of my seat than most blockbusters in recent memory.

What immediately caught my eye with Hotel Sowls was its art style, which teeters on the edges of both cute and creepy. Its characters are all anthropomorphic blobs, some clearly humanoid and others not so – to the point where you’re never quite sure if the thing you’re looking at is a character, an object or a background detail. The simple sketches are still highly emotive, leading to both great gags and great scares. The game’s grainy, monocolour backgrounds are reminiscent of old VCR films or esoteric spooky videos from the early days of Youtube. The overall aesthetic is both whimsical and unsettling. While there isn’t anything particularly violent or shocking (both in graphics or in words), I still never felt fully safe across the entirety of the game.

The premise is that as a traveller, the player has picked up a mysterious crystal, and due to unforeseen circumstances is forced to stay in a run-down hotel. A brief chat to the denizens will reveal that they’re not quite normal, and rather closed-off. Those who are friendly to you seem to have ulterior motives, and those who are hostile to you have no discernible reason to be this way. And after a night’s stay, you find that your crystal has suddenly gone missing – and what results is an unpredictable journey across the building’s six floors, meeting over a dozen unique characters. What I love about Hotel Sowls’ premise is that unlike other, longer adventure games, its self-enclosed setting encourages the player to become better acquainted with the locales and characters. The hotel’s various floors unfold and open up as the player unlocks more and more information. At each point when the player receives new clues, they’re open to revisit every unlocked floor and to speak to each character they’ve already met, in order to reveal the game’s plot in a slow trickle. Occasionally an NPC will let slip a crucial clue which will guide you to the next piece of the puzzle, whereas at other times you’ll be misled with some hilariously surreal repartee. This goes a long way to dampen the possible frustration that adventure games, particularly ones with esoteric theming, can have. I never felt like I was wandering around aimlessly, and if I didn’t know exactly where I needed to go, at least I could talk to the characters some more.

The strength of the script also confounds player expectation, and often sets up moments of surprise and tension. Each character’s voice is distinct and charming in their own way. I particularly liked the way various props were used as Chekhov’s Guns or red herrings; I wondered so much about various inventory items and how they would somehow become relevant to the game at large.

There are eight possible endings in Hotel Sowls, but they don’t diverge much apart from a fork near the endgame which encourages some player experimentation. I did like how each of the endings feels like an eventuality any player could have reasonably stumbled upon, based on the logical progression of the items they find. This means that even if the player misses a key item, they can still conclude their run and have a few unanswered questions to fuel their next one. That being said, one full run of the game lasts around two hours, and it can be tiresome to repeat all of the earlier days on a subsequent playthrough. My only real complaint is the control scheme; the left stick handles movement while the right moves a cursor to interact with the environment. I understand why this is necessary, since there are a few times you’ll need to interact or examine things which you can’t also walk up to. But it can feel a little clumsy. Thankfully, Hotel Sowls isn’t much of a pixel-hunter, so there are few places where this is a noticeable issue.

I had a lot of enjoyment with Hotel Sowls, which lasted for its entire run time and never overstayed its welcome. Its one of those games which cares about quality over quantity, and the control over tone and mood which Studio Sott exhibits is genuinely admirable. This game goes highly recommended to the inquisitive, the curious, and those for whom your standard video game characters and settings are proving just a tad predictable. You won’t have any idea what’s up ahead in this hotel.