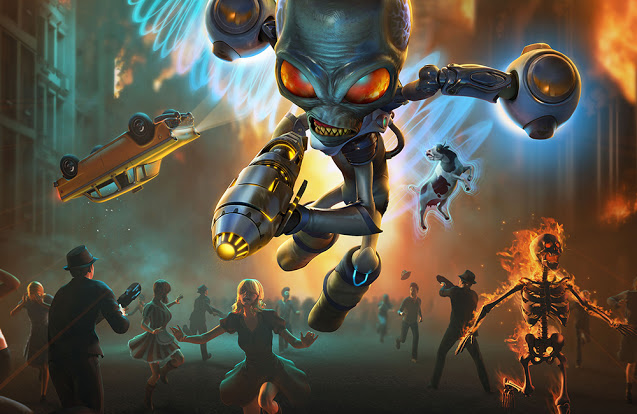 Playing Destroy All Humans! for the first time in 2020 is an… odd experience. This is a remake of a game that first came out in 2005, created as a parody of Cold War-era science fiction B movies, yet its satire feels as relevant and pointed today as ever. To satirise the United States of the ’50s is to satirise the United States of 2020—as depressing as that might be, it means that the irreverent, goofy comedy at the heart of Destroy All Humans! is swinging some big punches.

This is a game about being an alien invading Earth in order to harvest DNA from unsuspecting (or suspecting but just too pathetic to stop you) humans, using all manner of wacky alien gadgets. It’s also a game about going to war with a corrupt, paramilitary police force who, when you read their minds, reveal their utter love of using excessive force; about utter buffoons holding positions of power while more sinister forces pull their strings from the shadows; about Government propaganda being used to incite nationalist fervour and cover-up for the administration’s own failings; about how military posturing and arms races cause nothing but problems. And sometimes it’s just a game about yanking people’s brainstems out through their butts.

Destroy All Humans! is the story of Cryptosporidium 137 (aka Crypto), a member of a dying alien race that recreates by cloning. The discovery of a pure, ancient form of alien DNA within human biology offers the promise of revitalising the Furon race, so Crypto sets about to… well, destroy all humans (and harvest their brains). 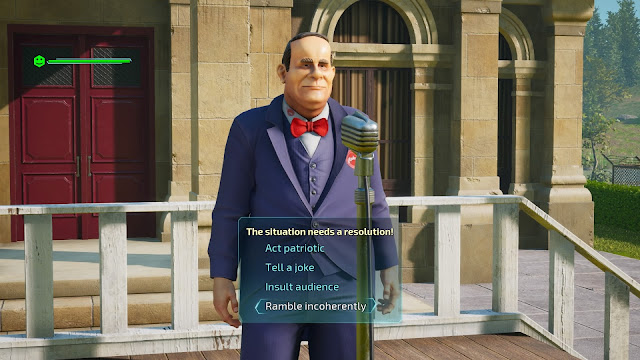 So you land in a caricature of a Midwestern farming town and proceed to wreak havoc, kill people by psychokinetically throwing exploding cows at them, and beam research specimens up into your flying saucer. The scale of your destruction doesn’t exactly go unnoticed, but that’s nothing you can’t resolve by posing as the mayor and assuring the townspeople that everything is fine and/or the problems are caused by the Commies, but they won’t win because we’re Real Americans, goddammit. (Conveniently, the latter option is exactly what the Government-controlled news media seems to always fall back on.)

Naturally, things escalate when federal agents called Majestic start getting involved. But that’s not always a bad thing for Crypto’s plans—for one thing, they’ve already got all the apparatus in place for widespread mind-control (read: propaganda broadcasts), which seems like a much more effective and efficient way of achieving Crypto’s goals. Why go through the hassle of finding and killing people one at a time, and dealing with an over-enthusiastic military, when you can just brainwash them into lining up and giving over their brains “willingly”?

In keeping with the B movie tone, it’s all comically exaggerated. Each level ends with a tabloid headline clumsily covering up your actions—”Mayor declares town safe! Exploding cows ‘under control’, declares town official”. Every character you encounter, from the random passers-by, to the cops and soldiers who attack you, to the people pulling the presidents’ strings, is a caricature of some ’50s American stereotype. When you read these people’s minds, the satirical stereotypes double down even further, from the office worker who’s way to chipper about his dead-end desk job to the politician who sees every interaction as a chance to play the ignorant masses for their own gain. 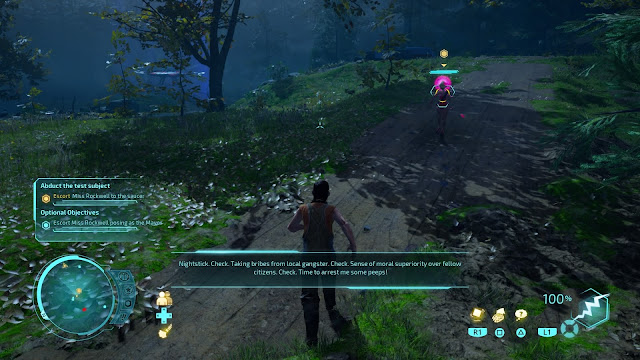 And then there are the cops, who think things like “every day’s a good day for excessive force!”, and who the in-game database—written from the perspective of Crypto as a complete outsider to human society—describes as a paramilitary organisation. If I didn’t know better, I’d almost think such lines were added to the remake to try and keep up with current events. That a game so deliberately ludicrous as Destroy All Humans! could also feel like so close to the reality of 2020 is a grim reflection of the state of America today, and that makes its satire all the more cutting.
It is still, in large part, an over-the-top B movie romp. It’s an open-world game lifted straight out of 2005, for better and worse. In some ways, the game feels dated—objectives are often simplistic and repetitive, the stealth and gunplay that makes up the bulk of the moment-to-moment action is rudimentary and lacks a lot of the creative developments that we’ve seen since.
But it still has a sort of creative spirit and unique approach to world design that we saw in those early days of open-world games. Instead of one needlessly large, connected map full of endless to-do lists, Destroy All Humans! has a handful of different, small-ish open-world playgrounds that encourage playful exploration. Those early open-world games were great at giving you a sandbox and a bunch of toys and telling you to just go nuts; Destroy All Humans! does that as well as any of them, with the added benefit of a tone and aesthetic that leans into that playful attitude. 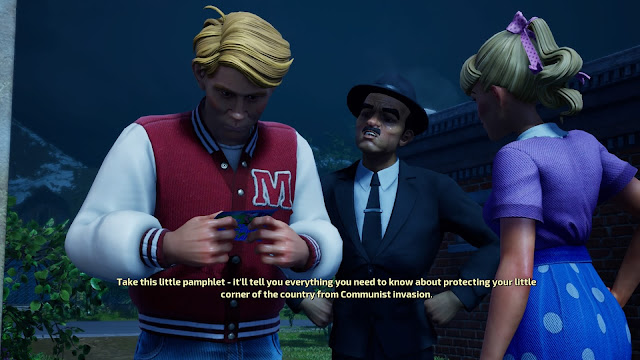 Destroy All Humans! also has the nice touch of its open-world being somewhat optional. While each map employs that sort of open design and is home to a number of different missions, you select those missions through a standard level select interface (instead of the old “travel across the map to find the next quest-giver” fiasco). Each mission takes place across some particular corner of the relevant map, but you can still free-roam as much as you like. Outside the main scenario missions, each map also has a free-play mode with a variety of unlockable challenges to find and complete.

By dividing things up in this way, Destroy All Humans! holds onto the best things about open-world game design—the freedom to explore and move about, the sense of discovery, the myriad of optional challenges that are put into context by the world around them—while also letting you just play it like a regular, old-fashioned, level-based action game.

In some ways, Destroy All Humans! shows its age, being a remake of a game that’s now 15 years old, in a genre that’s grown a lot in those years. But it’s also got a sense of humour and parody of American life that feels more relevant today than when the original game first came out. That’s a depressing reflection on the state of the world today, but it also means that the satire that underpins everything else in the game hits harder than the original creators ever could have imagined.

August 2020 Podcast: On writing a book about Resident Evil, and what makes a great JRPG