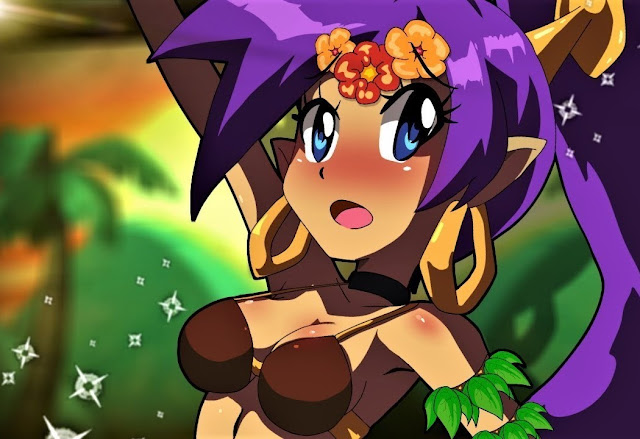 Shantae’s fifth outing also represents the first time that the series has lost a little of its lustre and magic, which is ironic given that the HD art has been polished to the point that it’s positively shining. WayForward’s team of talented artists and designers have, over many years now, crafted Shantae into a top-tier platformer series and the harem-costumed half-genie with a hair-whip to die for comfortably sits alongside Mario, Sonic, Banjo and Crash as the pinnacle protagonists of the genre. But it’s also clear that the development team are running out of ideas.

Related reading: Without a doubt, the best Shantae package to date has been the Half-Genie Hero Nintendo Switch edition. Our review.

Mechanically, this game tries to strike a balance between being linear in thrust and having the metroidvania elements that many found appealing in some of the previous titles. The result, though, is a jack of all trades and a master of none. Seven Sirens is nowhere near challenging enough to pull off hardcore linear platforming action, not gimmicky charming enough (a-la Yoshi) to be a casual all-ages deal, and not nearly labyrinthine enough to be a successful Metroidvania. The game flows nicely… almost too nicely, in fact. I found that I ran through the 10-hour playtime almost before I felt like I had started to get into it, and that was because I was that immersed in the rhythm and flow of it – but it all comes across as a little too safe. Five outings in, “more of the same” isn’t really an appealing prospect any longer.

I actually think that the problem – and to be sure it has become a problem – is the medium. There are a number of characteristics that Shantae exhibits that makes it a particularly appealing property, and none of those has to do with the genre. Rather, it’s Shantae herself, the eclectic mix of other characters, as well as the world they inhabit. The 1001 Arabian Nights fantasy-themed series has it all – it’s got the vibrant and distinctive opulence of Middle Eastern fantasy, the overt sexuality (which has been sanitised to be all-ages friendly, but it’s as assuredly there as Jasmine’s costume in the animated Aladdin film), the exotic monsters, and the lush music. It’s the kind of setting we don’t see enough of in video games and it invites exploration and investigation. Meanwhile, Shantae and the rest of the mob are playful, humourous, and richly realised characters that we want to get to know better. 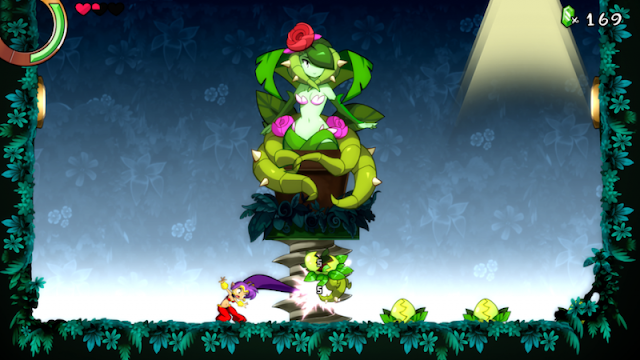 We never get that chance because of the inhibitions of the genre. The platformer is an inherently limited storytelling medium, and while there are narrative bits in Shantae (and they’re often very funny stuff), there isn’t the same depth of interaction with the character that you’d get from an RPG or adventure game. We’re at the point now where it feels like the developers are for some reason deliberately limiting themselves by taking a great character and setting and trying to make it work with the limited canvas of a Mario game.

It plays well. Shantae is a spry girl, and as you would expect from a developer with WayForward’s heritage in platformers, controlling her is a delightful exercise in precision and perfectly-tuned speed. Unfortunately, you’ll never really need to use the full depth of skill that is enabled by these absolutely perfect mechanics because the difficulty level just isn’t high enough to necessitate them being this good, but darting from room to room, dodging enemies and hurling magic around with abandon is a joy. So too are Shantae’s transformations. One of the highlight features of the series has been Shantae’s ability to do a hippy, sexy little dance and then turn into an adorable animal or another cute thing, and this can help her crawl, climb, and move into spaces that she couldn’t access as a human. It’s a core element of the game’s metroidvania mechanics, and it works seamlessly, and entertaining, here.

It’s hard not to want to have more depth from the gameplay, though. Again I’m drawn to muse on the idea of a Shantae RPG, but between her expanding range of abilities, and the extended cast in Seven Sirens, this game would have been ideal for something a little slower-paced and more character-driven through the actual mechanics of play. Previous titles in the series worked hard to keep players engaged by throwing in lots of mini-events and set-pieces that offered a different kind of gameplay – a magic carpet ride here, an endless runner moment there – but those are also absent in Seven Sirens and by the time you get to the final dungeon in this game – a real grind if ever there was one – even the biggest fans of Shantae may well find themselves exhausted, finally, with what this series offers. 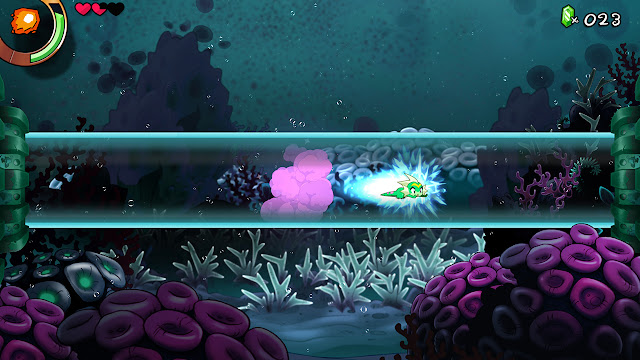 Related reading: For some real nostalgia, pick up the original Shantae on Game Boy Color (available on the 3DS eShop Virtual Console). Our review.

Now with all of that said, Shantae and the Seven Sirens is a delight. Case-in-point, when I first played it on the Apple Arcade I gave it 4.5/5 stars. It’s just on hindsight and a second play-through that I’ve realised that that powerfully strong impression has more to do with the aesthetics and personality that WayForward has mastered with this character and her world than this particular game in itself. It is, in a very weird way, a little like those Avengers films – the first time through it’s a rush of wonder and a chance to experience a favourite character in an all-new adventure. The second time through the paint has peeled a little and, without the excitement of the unknown ahead, the shallow cracks start showing. I want WayForward to continue with Shantae. I don’t think she’s done yet by any means. But perhaps 2D platformers aren’t the future for her now. Perhaps it’s some for something a little more narrative-focused rich in the worldbuilding, to play to the properties’ actual strengths, because after five 2D platformers, I’m now getting tired of being teased that there’s more to all this, but never actually getting the promise of a fully realised Shantae fantasy.